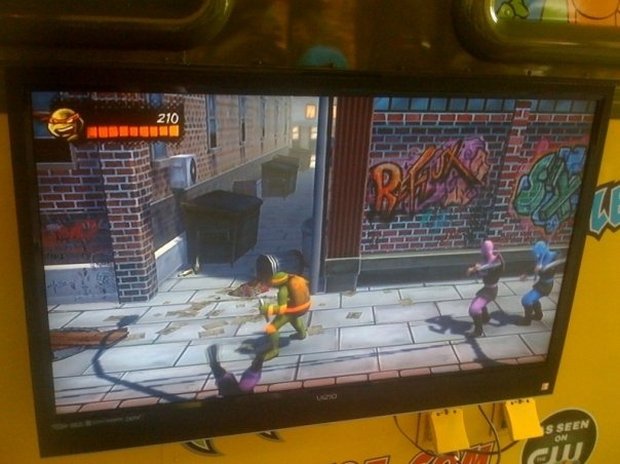 I was the biggest Teenage Mutant Ninja Turtle fanboy growing up. I had the toys, bedsheets, clothes, underwear — basically, if the product had the TMNT logo on it, I had it.

Over the last few years, 4Kids Entertainment has been pumping new life into the TMNT franchise. For the most part, the results have been garbage. The animated movie wasn’t that great and the cartoon that’s running right now is horrible. So I’m not really holding my breath for the remake of Teenage Mutant Ninja Turtles: Turtles in Time.

Oh, yes! Turtles in Time is getting a remake! We heard awhile ago through the grapevine that Ubisoft is publishing the remake, so it’s about time we saw what the game looks like. The video (after the jump) and pictures comes to us from the Tribeca Film Festival that took place in New York City recently. All we know so far is that it’s on XBLA, and that they’re staying close to the source material as Shredder looks exactly as he should.

So who’s looking forward to kicking shell with the worlds most fearsome fighting teens?

[Thanks, Buster and Andrew]

[Update: TMNT fan blog “Ninja Pizza” has some more details, including a possible Virtual Console release of the title.]