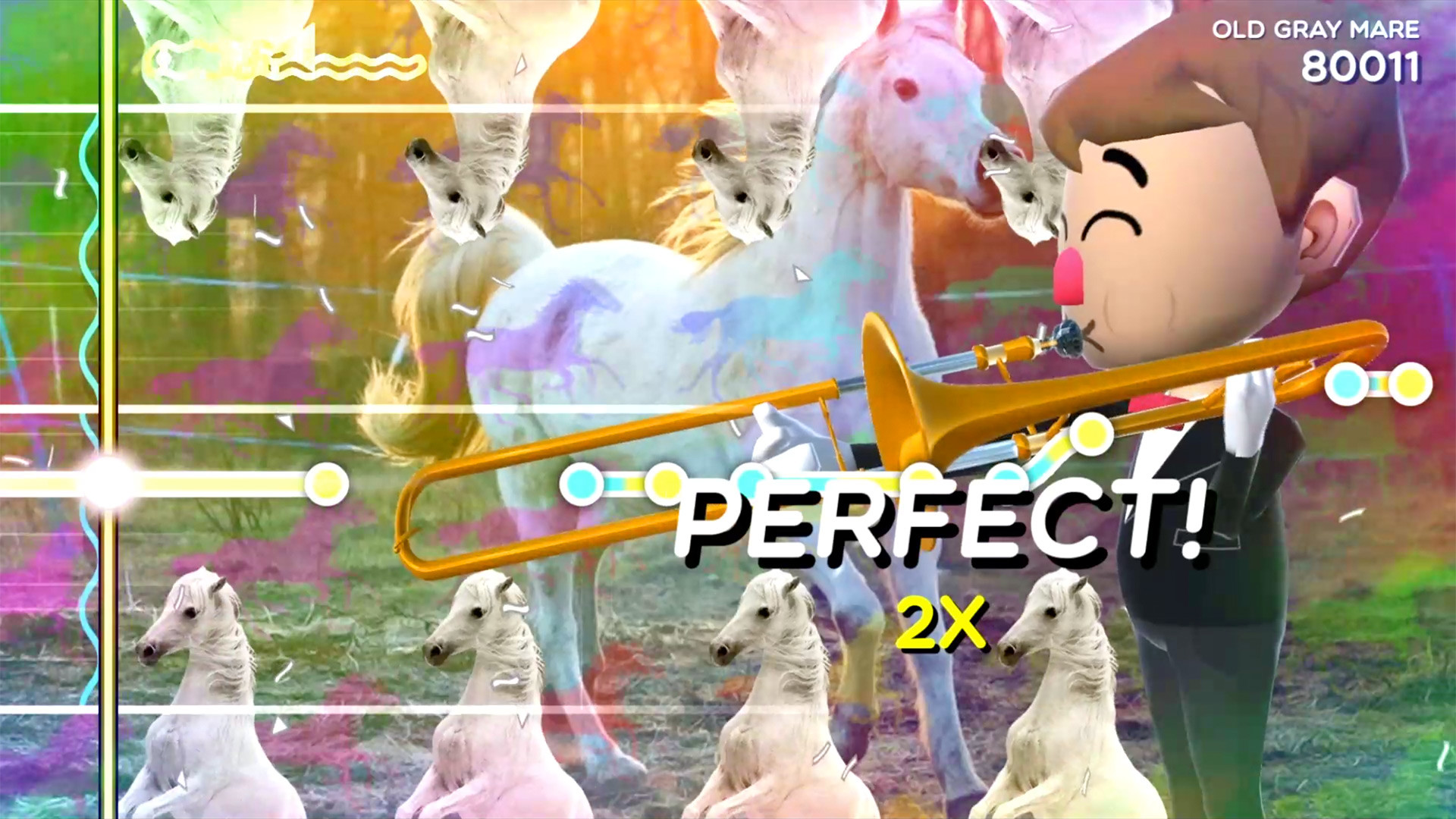 Slip and slide all the way around the song

You’ve probably noticed Trombone Champ popping up all over your social media feeds over the last couple days or so. It is instantly recognizable as exactly what it is: a rhythm game about playing the trombone. The simplicity belies the point, though. Trombone Champ is a trombone rhythm game, and an exceedingly good one too.

At this point, I’d go into some sort of recitation of how Trombone Champ sets this all up. Maybe how it handles, or what buttons it uses to do the things it does. The mouse moves a cursor up and down in inverted fashion, and your mouse click or any keyboard button is held to play notes.

Yet much like Untitled Goose Game or Snipperclips, this is the sort of experience you can just “get” by looking at it. It’s probably why the game has been circulating so fast through videos. I first saw this game on Giant Bomb’s Unprofessional Fridays segment, and again when PC Gamer’s lovely rendition of Beethoven’s Fifth hit Twitter.

The world's first trombone rhythm game is instantly a GOTY contender. And no, I'm not kidding. Turn up the volume and hear Beethoven like you've never heard it before. https://t.co/Qu7Cmkhjzc pic.twitter.com/jTXNdWx3Zm

Booting it up myself, I was also amazed at how quick it all felt natural. Part of this is the easy control scheme. Trombone Champ starts you off easy, literally taking you through a few scales.

Now, full disclosure, I have partaken in some education in the ways of the trombone. I wouldn’t say I’m any kind of virtuoso, but it’s an instrument I’ve always enjoyed for a myriad of reasons. Reasons that, oddly enough, feel very well-reflected here.

The trombone gets its goofy, glissando nature from the fact that it’s basically one big horn, and you’re holding a loose tuning slide. Where other instruments use plungers and the like, playing trombone means learning all the positions the slide has to be in for each note.

Early on, you might learn some rough approximations. First, second, third, fourth, etc. But as my old teachers would remind me, every note is different. You’re essentially tuning a horn on the fly to make notes happen. This is extremely interesting and rewarding to learn, and also just inherently goofy.

Playing Trombone Champ, you can hear players get in the ballpark of the right note and slide into it. Things will sound right-ish, but maybe not always exactly correct. And hearing an obvious miss, or a series of notes where the player’s slide is just trying to keep up with the cascade of notes, is really fun.

Trombone Champ is the best game ever made pic.twitter.com/GH58eHGXHV

There’s an attention to detail here, in terms of the way Trombone Champ handles. Hitting a button on the keyboard starts and stops a note, and you can indeed run out of breath. One hand has to manage the articulation of the note, while the other manages the tuning via the slide.

The slide controls are inverted, which might seem strange at first. But on a trombone, higher notes tend to be played with the slide pulled in, while lower notes can need more tube and are thus pushed further out. (Anyone who’s had to reach for a low-E way out in seventh knows what I mean. My thanks to the inventor of trombone triggers.)

This trombone lecture is not just to validate years of band directors telling me this knowledge would be applicable in the real world. It’s to stress how effective Trombone Champ works as a rhythm game, because of its use of the real, physical, tactile nature of playing its star instrument.

It reminds me a bit of games like QWOP, which captures a similar feeling of hilarity. Something that is beautiful when done well, and hilarious when done poorly. The friction hasn’t been taken out, just smoothed into part of the experience. It’s wonderful to me that many people are buying Trombone Champ with the expectation that they will be terrible at it.

The public domain-infused soundtrack helps so much here, too. Everyone knows what tunes like Gray Mare or Oh, Canada should sound like. They can hear every note in their head. And when the expectation is met with a sliding, modulating trombone messily tooting it though? Beautiful.

Normally I’d lament the lack of big-name licensed tracks, but developer Holy Wow has picked out an excellent selection of familiar, recognizable songs. Anthems, culturally significant tunes, and motifs you probably heard in Looney Tunes growing up all make this a perfect setlist. Add in some made-for originals that are also quite good, and it’s a quite good launch lineup. Obviously, I’d love some custom track integration or a sort-of level editor, which the studio says is on its mind. It’s also working on higher priority updates, like new songs, accessibility options, and a score graph that can note performance throughout a track.

No bone to pick

There is a surprising depth of things to do in Trombone Champ, outside of just tooting your way through many familiar tunes. As the ominous intro sequence implies, Holy Wow has hidden a fair number of secrets away in this game.

Hidden bonuses adding extra depth, and even a menu plainly lifting from Super Smash Bros. Ultimate, all give Trombone Champ the good vibes of a Flash-era game. The kind you’d go to a friend’s house and boot up, or snicker away at in a computer lab. It has great production, many well-executed gags and jokes, and even a loot box system filled with Did You Know non-facts about the history the ‘bone.

I really can’t recommend Trombone Champ enough. It might be easy to see it as a gag purchase on the outside, and to be clear, you will crack yourself up playing this game. But there’s a level of dedication and craft behind the silliness that I really admire. Trombone Champ captures comedy and musicality in equal measure, just like a trombone. And it’s well worth your time. Find it on Steam over here.