Today is Memorial Day, which in the United States is a federal holiday. In many ways, it marks a true first day of summer — pools open, we cook out, and many people even have off from work.

Such is not the case with Nintendo (or myself, it appears), as they’re busy launching three titles onto the Virtual Console today: ActRaiser (SNES, 800 points), Kid Chameleon (Genesis, 800 points), and JJ and JEFF (Turbografx-16, 600 points).

I’m going to level with you guys — I’m tired, a bit hungover, and I’m not really prepared to do much today. But since I like you guys, I’ve forced myself to spend five minutes with each of these games this morning. And instead of pasting Nintendo’s press release after the jump, you’ll find impressions that are sure to help you with your buying decisions.

The game starts off with a naked cherub asking me my name; because I’m tired and juvenile, I name myself “BooB.” That’s funny, so I laugh to myself. The cherub then asks me (as if he can tell I was up all night and dragged myself out of bed to write a post about God damned Virtual Console releases) “Are you awake?” I’m really not, but what’s the difference? He tells me I’m going to have to fight some monsters anyway. Well, that’s great.

I’m then tossed into a frighteningly detailed menu screen, one that I only vaguely remember from when I received this game as a gift on Christmas day in 1991. I’m old, and it’s way to early for this s**t, but I choose “Fight Monsters” because that seems like the thing to do.

The cherub wishes me, Sir BooB, luck and the game then launches into a killer Mode 7 sequence that brings me into the battle. It’s at this point that I remember how awesome the game is — I fight ghoulies, a pissed off ape creature falls out of the sky, and a tree with bad posture spits honey at me. Between this and the game’s simulation elements, I’m sold. 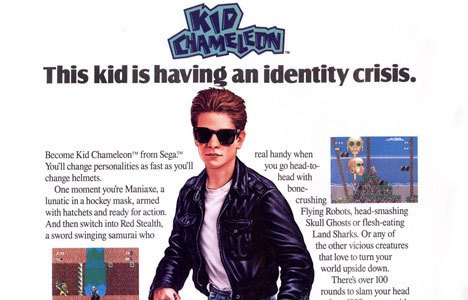 OMG! There’s a new arcade in a town … a virtual reality arcade! Problem is, it seems that the game’s boss has escaped and is molesting children (or just defeating them at the game, I can’t remember). Apparently, this Genesis classic is the story of someone who was too tough to beat. Someone who, apparently, is so tough that he looks totally bad ass tucking his shirt into his jeans. Someone who is … Kid Chameleon.

Fine, I’ll buy that. Within my first few minutes in the game, I’ve turned into a knight and a samurai, attacking stumpy dragons and weird stone monsters with tank treads. I think someone was more hungover than I am when they programmed this. The game promises to turn me into midget versions of all sorts of things (hence the “Chameleon” half of the title), including Jason Voorhees and a tank that shoots skulls. That’s totally metal. 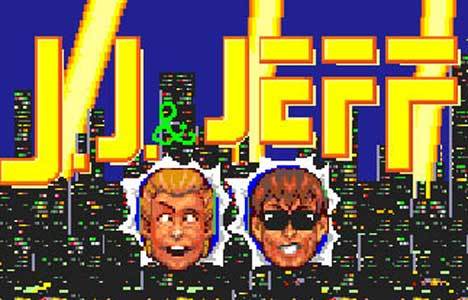 From the short amount of time I’ve spent playing the game this morning, I think I’ve fully grasped the concept. It appears to be about a gay couple that make dog sounds at one another, instead of talking. They run around the woods kicking the s**t out of each other, fire hydrants, mosquitos, and ugly dogs. There also appear to be poop power-ups … or poop enemies.

What’s the difference? This game rules!

Now, can I go back to sleep?