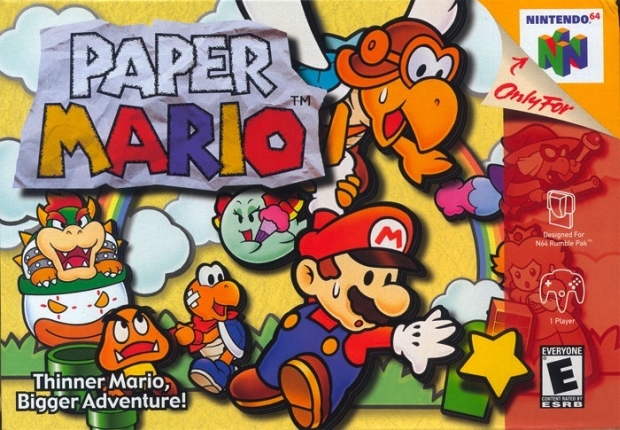 Goddamn. I loved Paper Mario when I was younger. Adventuring as the mustachioed hero in an action oriented RPG was just the vacation I needed from my boring everyday life. Discovering new cooking recipes, powering up my partners, and exploring a new version of the Mushroom Kingdom was enough to make me squeal with delight at times, and gasp in awe at others. Hats off to Intelligent Systems for making such a damn fine game.

Having just finished exploring an ancient tomb in the Dry Dry Desert, Mario and I were flying high on adventure, ready for wherever our journey would take us next. Needless to say, I wasn’t quite prepared for the Spooky Forest or the mansion that was hidden with me. Boos scared me to death when I was younger. Still I soldiered on, facing my fear of the big-tongued ghosts. Eventually, I met Lady Bow, the aristocratic ruler of the Boo Mansion. She demanded that I take her along with me to help stop Tubba Blubba, a monster who had been terrorizing the Boo Village. In exchange, she would give me the Star Spirit she had captured.

I reluctantly helped her. I mean, I wasn’t enjoying being blackmailed, you know? Plus, fighting giant invincible monsters isn’t exactly my idea of a good time. Yeah, he’s invincible. It fucking terrified me. What was I going to do, bury him alive? Still, I journeyed to the Boo Village and infiltrated Tubba Blubba’s castle. After an hour of tiptoeing around the oversized castle, I was finally in his room. Thankfully, he was asleep. I snuck over to a suspicious looking chest in the corner of his room, and obtained a key. It was just my luck that this key could talk. After telling me that Tubba Blubba’s secret was hidden underneath the windmill I passed on the way to town, he decided to scream this:

Oh my God. He was awake now, and he was pissed. I ran as fast as I could out of the castle. Much to my surprise, the Boo’s from the village blocked Tubba Blubba at the door, giving me time to get to the windmill. I rushed as fast as my feet could carry me, unlocked the door, and delved deep into the basement. I wasn’t prepared for what Tubba Blubba had hidden.

It’s hard for me to express how difficult it was for my nine-year-old mind to process seeing Tubba Blubba’s heart sitting in a nest beneath a windmill. It’s even more difficult for me to explain how much worse it was that it could talk. I think I put it out of my mind at the time, not wanting to devote too much time to processing the confusing nature of what was going on in front of me.

As mind-blowing as it was that Tubba Blubba’s Heart could talk, I still had to keep my focus. This was the hardest boss I’d faced yet. His powered up attacks were devastating, and if I wasn’t careful, he was going to end my adventuring career prematurely. After a long and difficult fight, the heart eventually gave up and ran for its vessel, Tubba Blubba. I chased it out of the Windmill, ready for the final battle.

What a pushover. I had thought that Tubba Blubba was a colossal badass, an invincible behemoth! As it turns out, he was weak. The reason for the hiding of his heart deep beneath the windmill became clear to me. Without his invulnerability he was nothing. Tubba Blubba fell before he even managed to put a dent in my defenses.

Having fallen, I watched as all of the Boo’s Tubba Blubba had eaten were again released into the world. Suddenly, my fear of the strange, ghost-like creatures was gone. They had become cute, cuddly friends who I wouldn’t mind spending an evening with. Thankfully, the rest of my adventure with Paper Mario would be filled of wonderful moments reminiscent of this one.

Writing this blog reminded me just how much I love Paper Mario and its sequel Paper Mario and the Thousand Year Door. So many of my videogame memories come from these two games, and without them, I don’t think I would have the sense of humor that I do today.

The Other Bane of My Existence

Of every boss in Paper Mario, none is more memorable than the Koopa Bros. A very loose parody of the Teenage Mutant Ninja Turtles, the Koopa Brothers bring a touch of humor to a difficult boss fight. They first attack you inside of an obviously wooden Bowser Mech, and once that is defeated, you fight the Koopa Brothers themselves. A wonderful theme plays, and a great fight ensues. Later on in the game, when you’re working your way through the final castle, they attack you once again. This fight isn’t much different from the first, but it’s just so wonderfully done. I remember it having the effect of bringing me back to the beginning of my adventure, something that other games should take note of.