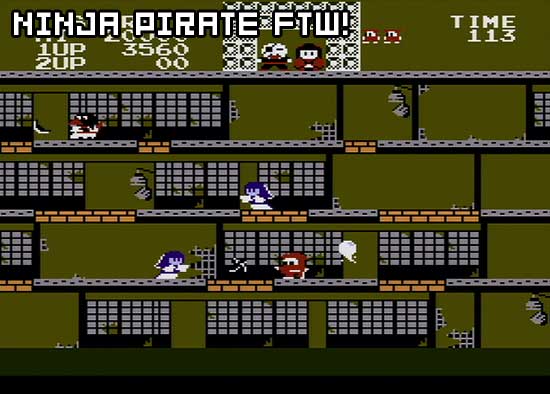 Ninja JaJaMaru-kun (NES, 1-2 players, 600 Wii Points) is available today on the Virtual Console, and it marks the first time it has made its way outside of Japan and PAL territories. As JaJaMaru, you throw shuriken at monsters to clear stages, attempting to thwart them all in order to release Princess Sakura from the evil clutches of Namazu Dayuu. If this kind of ninja action is too intense for you (pansy), perhaps the space-aged Lunar Pool (NES, 1-2 players, 500 Wii Points) or Golden Axe III (Sega Genesis, 1-2 players, 800 Wii Points) are more your speed.

October 22, 2007 Autumn leaves aren’t the only reason your October is about to get a lot more colorful. The latest additions to the Wii Shop Channel deliver a brisk, eye-pleasing mix of classic gameplay for fall. Dive into this pile of vibrant titles for a timeless dose of fun and fantasy.

Lunar Pool® (NES®, 1-2 players, Rated E for Everyone, 500 Wii Points): Lunar Pool takes the historical game of billiards and reinvents it with a unique and futuristic flair. The rules are simple: All you need to do is use your cue stick to hit the white cue ball, causing it to hit the other numbered balls and make them go into the pockets. You can enjoy nearly unlimited game play with 30 tables, two different ball arrangements, and the ability to change the degree of friction on the table. You can play against a computer or another human player, so try challenging someone once you’ve got the hang of the game.

Ninja JaJaMaru-kun®  (NES®, 1-2 players, Rated E for Everyone, 600 Wii Points): Take on the role of a ninja called JaJaMaru and rescue the captured Princess Sakura from the evil Namazu Dayuu in this action-packed game, previously unreleased outside of Japan. JaJaMaru must use his throwing stars to defeat the monsters lurking in each of Dayuu’s many hideouts. JaJaMaru has to be careful though, as each monster has its own unique weapon and method of attacking. The only way for him to advance is to break the floor bricks above him and move up and down between the levels of each round, defeating monsters as he goes. To help him, broken bricks sometimes reveal items that JaJaMaru can use to his advantage, possibly leading to the ultimate power-up: a ride on Gamapakun, the giant frog. Throw in some bonus stages and you’ve got a game with a style all its own.

Golden Axe™ III (Sega Genesis, 1-2 players, Rated E10+ for Fantasy Violence, 800 Wii Points): The once-peaceful kingdom so familiar to fans of the original Golden Axe is under threat once again. The Prince of Darkness has stolen the invaluable Golden Axe, taken over the kingdom and rendered its warriors harmless with an evil curse. One warrior breaks free from the curse and must defeat the prince and regain the Golden Axe to save the kingdom. In this one- or two-player action game, play as a giant, a panther or a sword-wielding human and fight your way to victory once again.