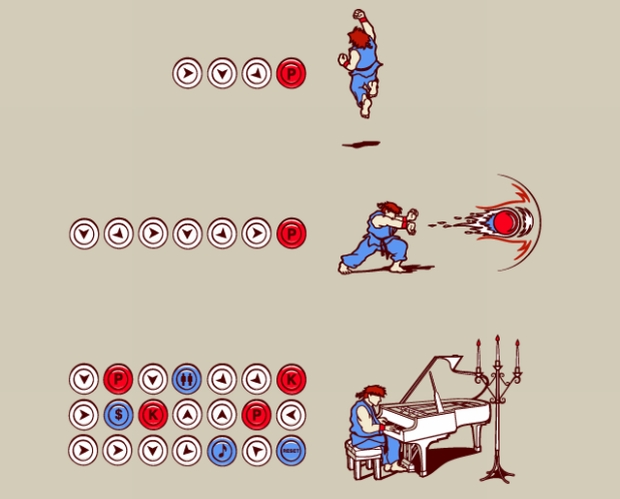 On my trip back from Miami in March, the airlines lost my luggage. I had some quality T-shirts in there — some of which I can never order again, since they’re out of print now. Because of Continental’s f*ck-up (don’t ever fly with them), I’ve been searching high and low for shirts to fill out my wardrobe again. Threadless sent out their weekly e-mailer today showing off their new shirts, and I now have a shirt to help grow my epic T-shirt collection again.

The shirt is called The Ultimate Combo and it depicts Ryu performing some of his best moves. The concept was created by David Soames and was floating around the Internet a short while ago. Now it’s been turned into a shirt and like most Threadless stuff, you better get it fast! Be sure to check out David’s other work, as it’s all pretty damn awesome.

A few other new videogame-related shirts were released this week too. Click the underliney text with your pointy device to absorb more words, thoughts and pictures.

Over on Uniqlo, they have three new videogame-related shirt. From left to right, you have Rally-X, Phoenix Wright and Densha De Go (train simulator) -related shirts. There are a bunch of shirts on the site that I’ve never seen before that retro lovers may get a kick out of. Be careful when ordering, as Japan uses different sizes and you might want to order one size up (if you’re a Large, get an Extra Large).

[Via Tiny Cartridge and Offworld]

Over on SplitReason, they have three new gaming shirts that are decent. Of the three, this Ghostbusters meets Pac-Man mashup is my favorite. The Ghostbusters are totally cheating though, as they don’t seem to be using Power Pellets at all!

There’s also this Pac-Man skeleton shirt and a Mount Rushmore spoof that features Master Chief, Mario, Snake and Gordon Freeman. Both are too cheesy for my tastes.

And hey, Destructoid has a store too, you know! Go buy our shit! I’m a consumer whore! AND HOW!