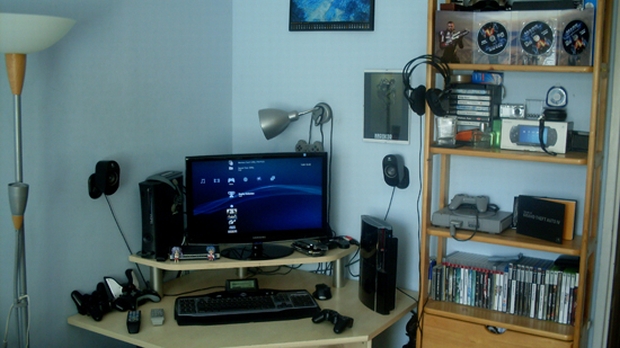 This week’s gaming setup belongs to Spajk. It’s a pretty simple setup, but very clean and neatly organized. He has a nice collection of games and I’m digging the consoles with his computer setup arrangement. Check out Spajk’s blog for more pictures of his setup.

The A.M.M.O. soundtrack is out, everything on Wikipedia is true, Brad Nicholson is a man’s man, the EuroNARP 2 was pretty epic and more awesome happened in the community this past week.

Haxan has a new gig over at beloved toy culture site, Tomopop.

mistic recapped the awesome EuroNARP 2 that happened a couple of weeks back over in Europe!

Faith made this cute Scribblenauts figure out of beads.

The soundtrack for Agent Moo: Maximum Overdeath by I KILL PXLS has finally been released. The soundtrack was made by GuitarAtomik and features seven awesome songs.

Isay Isay has been a proud daddy for a full year now. Yay!

ImpossiblePlant is back and brought some sweet art with her to show off. Check out her custom faceplates and Munny figures!

billyib stopped by to show off his nice Mr. Destructoid fan art piece.

Everything on Wikipedia about Jim Sterling is completely true.

More Scribblenauts love from this community by way of garganroo’s art.

An audio tribute to Brad Nicholson.

Some of the HAWP DVD menus you guys have created look pretty damn good!

Highlights end with the latest episode of Drunkcast.