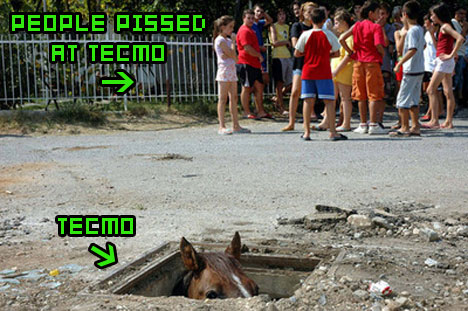 When a Japanese man says you have lost your honor, you may as well throw yourself into the path of a passing car on the spot — his opinion on such matters tends to be rather definitive. That’s exactly what happened when Ninja Gaiden director Tomonobu Itagaki left Tecmo recently, saying he could no longer work with President Yoshimi Yasuda, who he named as  “a man who chooses not to honor promises even when he is able to do so.” Ouch.

Apparently things have gone to hell in a hand basket around Tecmo way, per breaking news this morning that two Tecmo employees are suing the company for unpaid wages in the sum of 8.3 million Yen ($77 grand). The workers claim that they were placed on a “flexible hours” schedule where they were not paid for their overtime, which has been going on for the past four years. Sounds like working in retail!

It gets worse, though: the suit actually claims that Tecmo may have created false documents and hidden essential accounting documents. The plaintiffs actually represent all 300 Tecmo employees and are contesting that the flexible hours structure resulted in over 100 hours of overtime per month, which was unpaid.

Tecmo developer Hiroaki Ozawa is actually one of the plaintiffs in the case, and since February has headed up the “Tecmo Labor Union” in an effort to fight back. Things look bad for Tecmo, with both major and minor players speaking out against them. We’ll bring you more detail on this as soon as it is available.