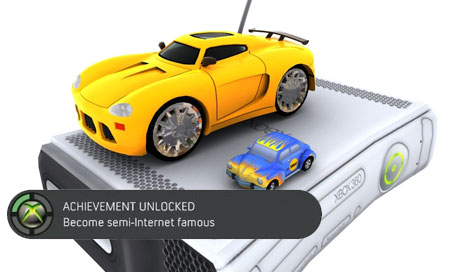 We were slightly afraid of what you guys would come up with when we gave you the opportunity to create your own achievements for Load Inc.’s upcoming Xbox LIVE Arcade title, Things on Wheels. But you did us proud, and Load Inc. have chosen their winners.

Congratulations to Destructoid community members Lode40 and AlienGuy18, who will not only have their achievements appear in the game, but will get listed in the credits as well.

“We all love Top Gear. I just can’t die before knowing who the Stig is!” Load Inc. told us of Lode40’s achievement, “All we know, he’s called the Stig.” The achievement — which requires players to win ten multiplayer races in a row — is something that Load Inc. says the entire community was asking for.

AlieGuy18’s “Downgraded” achievement (“Win a race without using any power-ups”) was also a favorite among the devs. Their previous XBLA title Mad Tracks had a similar achievement, “Can’t Touch This.”

“We put power ups [in Things on Wheels] everywhere,” Load Inc. told us. “Avoding them is not going to to be easy.”

Congratulations again, and thanks to Load Inc. for giving our community this sweet opportunity to feel important and impress members of the opposite sex.