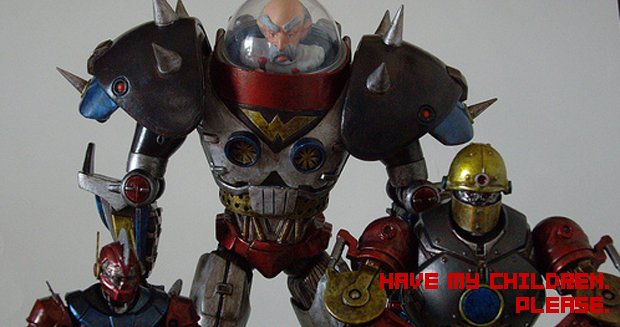 Doctor Wily is one of my favorite videogame villains ever. You have to admire the man’s persistence. He’s a guy who knows what he wants (global domination) and he’s not going to let little things like repeated failure and a lack of practical robot concepts stop him from succeeding in his aims.

Custom toymaker Donald “KodyKoala” Kennedy thinks that he would have been more successful if he’d just built himself a robotic suit directly under his control to fight the Blue Bomber. He designed a toy to reflect what he thinks such a thing might have looked like. While he was at it, he also made more realistic-looking versions of classic Robot Masters Gutsman and Metalman.

I’m absolutely in love with these toys. In particular, I’m impressed with how detailed Wily is in his little bubble and I think he’s done a great job of capturing Wily’s design aesthetic.

KodyKoala has done a bunch of other great work, such as Airman — complete with a working fan — and a Mario Kart toy made from paperclips. You can check out more photos of the Wily suit and robot masters here.