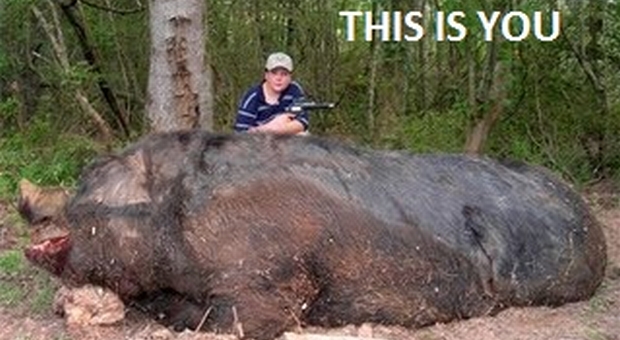 When it comes to RPGs, enemies mostly come in four varieties: humans, flora, fauna, and monsters. Typically you’ll see the first and the fourth as major foes, and the second and third as the fodder you mash while building money and experience. When you defeat foes such as the Turks in Final Fantasy VII, evil is punished, no big deal. Toppling a behemoth isn’t much of a moral issue either because you know he’d tear you a new materia hole if given the chance.

But what about when you’re running around outside Midgar, trampling into the wilds and intentionally stirring up fights? Sure, it appears as innocent grinding, stomping around and making noise to scare out the animals, but let me tell you what you’re grinding there — animal guts.

Enough of the Final Fantasy VII examples. Take any RPG that flows with standard conventions. Think about how many evil plants, wandering dragons, or electric fish you’ve killed. It’s countless, because the standard convention requires a player to build levels. The best way to build levels is to wander around outside town through random encounters. The random encounters are mostly flora and fauna, with the occasional goblin/mercenary thrown into the mix. You meander through the desert and encounter a massive sandworm, a wonder of nature by its own right. Truly an apex predator of this magnitude should be studied and appreciated and oh well, just cut it the fuck up already and get your 2000 experience points and 10 gold from it stomach, because we all know that even though the choice to run away is present, the player never will. You cannot finish the game without gaining experience, and this is what the game forces you through.

Ever wonder why people in towns are so eager to give you information, and never are bothered that you just barge into their homes? Because they’re scared as hell! You’ve just been cutting through the nearby fields and forests, decimating the food chain. They’ll tell you anything to get you out, and won’t even raise an eyebrow when you raid the chests in their homes. Oh sure, you justify it by saying these are dangerous creatures that need to be eradicated, such as those found in most Dragon Warrior/Quest titles, but just because a lion might attack a man doesn’t give an armed group excuse to romp around slaughtering every single one they can find. But again, it’s required. Very few RPGs will allow a player to progress without building levels, and since they haven’t yet figured out how to concoct a length quest where every encounter is integral to the story, there will always be a river of blood between each town.

What I’d like to see are random encounters where simply scaring off the wild animal, deceiving them, or just avoiding them is the way to resolve the scenario, with experience rewarded accordingly. An occasional situation where killing the animal or plant is the only way out would add to the realism. If I was travelling with a group of friends on a quest, I wouldn’t want to put them at unnecessary risk by chasing down a giant fucking poison moth.

There aren’t many RPGs that would look at the other side of the random encounter, but Ys: Book II actually did just that. When Adol is granted the ability to morph into an imp, he can communicate with all the animals and monsters, as well as try to communicate with the townspeople, who are less than friendly. Some of the monsters spit the expected non consequential bullshit, as seen here:

But take a look at what some of the others say.

And look at what this turtle-like creature is saying.

Good god! If you ever need a game to make you feel horrible about slaying two-frame hyper animated sprites, look no further than Ys II. Here you are bombing around this mountain, killing some one-eyed yeti and all his friends, and also tearing apart a giant turtle who was just lost and confused. Good job Adol. There isn’t much else to say except that all of us RPG fans are horrible, horrible people with no regard for nature’s balance. Agent Smith was right.