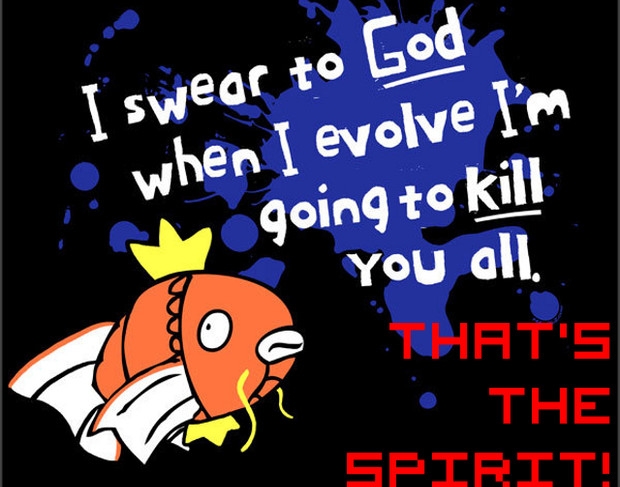 At first glance, some may expect a treatise on Pokémon as a cock-fighting simulator. That would be way too easy, and it’s been done before. Rather, I’m here to expose how Pokémon, as a cumulative franchise, has a more insidious, wide-reaching goal.

But how, you ask? Pokémon is all about making friends with small, adorable creatures, so that they will aid you in combating less well-intentioned critters of similar adorability, and gain honor and prestige as you make even more friends in this great and wonderful world with way too much tall grass!

What a load, and in many ways, a load that makes a lot of the veiled corruption in this game come across as even more repulsive. Let’s take a loose, imaginary play-through of your average Pokémon title, and begin shedding some light on things.

To start, a “kind” old man from your hometown entrusts you with guardianship of a mysterious pet, claiming it’s for your own protection from the legions of scary cute things out there. Your childhood best friend, who is already of a bit of a prat, joins you, and it’s here we learn our first lesson.

Those closest to you will inevitably betray you, so be prepared for it. This young man you’ve grown up with, spent hours alongside in school and on the playground, immediately selects his new companion on the basis that it is diametrically opposed to whatever you’ve chosen to befriend. Any loyalty and trust that has grown between the two of you is cast aside the second he realizes he has a chance of putting you in your place and excelling beyond you.

The game pretty much requires you to defeat your newfound rival to proceed, and thus begins a rift that will last through many lands and many an adventure. Your rival takes off, his new Pokédex in hand, and bids you ill as he proclaims his eventual dominance to be inevitable. You, too, recieve one of these Pokédexes, and are encouraged to “catch” and “trade for” as many of these Pokémon as possible, with possible incentives promised should you impress the kindly old fellow with your collection.

Lesson two? Surround yourself with as many “friends” as possible, solely for your own gain. Catch ’em all, and you will surely be rewarded. Acquaintances are one of the world’s primary currencies, to be bartered and spent as is convenient.

You leave town, and begin fighting wild Pokémon; mostly small rodents and birds that would probably piss right off if you were to toss a stick or rock at them. With the aid of small, confining spheres and a good smacking, you start collecting new “friends,” which will fight for you just as loyally as the one the old man gave you. This gives us two incredible insights into the core personality of the average pocket monster, and by extension, the real people they’re meant to reflect. Most anyone you will encounter is a closet masochist, and the best way to win people to your side is to abuse them until they refuse to leave your side, and pitting your friends against strangers and the friends of others is the safest and smartest way to get ahead in the world.

Not only that, but you learn that you can release any undesirables back into the wild should you grow tired of their company, and they’re just as easily replaced by others romaing in the tall grass between towns. Others are expendable, and discarding them on a whim is perfectly kosher.

The undertones are already shaping up to be fairly monstrous, and yet, we’ve barely even scratched the surface. As your travels continue, you encounter other “trainers,” who are equally intent on using their companions in attempts to get at you. It’s okay to be manipulative, because you’re far from the only one doing so.

Very quickly, you notice a distinct schism in the sorts of opposition you’re meeting. A great many of those you encounter just by wandering around, while aggressive, aren’t very competent, and fall almost as easily as their Pokémon would without any master. These laughable battles are your primary source of income and experience, however, showing us that one should never hesitate to crush the weak, as it’s still profitable.

On the other hand, you discover whole enclaves of trainers who work specifically at using small, dedicated groups of friends. They even have clubs dedicated to this endeavor, where tips can be swapped, plots can be hatched, and techniques can be honed. Conspiracies abound and dedicated bastardry is real, so learn to out-manipulate the conniving and keep an eye out for their weaknesses.

What a sick, sad world the average Pokémon trainer is forced to live in. Not only is over half the civilian population well-versed in dickotry, but illicit activity runs rampant. Entire crime syndicates, under the less nefarious moniker of “Teams,” wreak havoc on the lives of those around them, and specialize in the trafficking of your friends and the friends of others for profit.

All the while, the police force, despite being everywhere, has nothing resembling a handle on the situation. You are the law, and any transgressions are fully within your rights to handle, because “the authorities” are impotent and below you. Even if they are kind of hot.

And so it continues. You bring more and more comrades under your sway, using them as they are convenient and setting them aside as soon as they become less useful. The rats and pigeons in your life make way for bears and beasts, and the more specialized manipulators you take down, the better capable you are of keeping your own herd in check and acquiring more powerful associates. Eventually, it is made clear that the quickest and easiest way to dominate is to get in with those who are truly powerful; “Legendary,” if you will.

The meek will inherit nothing, so get those in power under your thumb. Sure, it may take all the resources and the strongest contacts in your network, but to truly get ahead in this world, you need the most influential bad-asses out there on your side. Cajole them, trap them, surround them if you must, but once you have their power, the world is yours.

As if this crash course in being a manipulative, soulless jerk weren’t enough, Pokémon provides some corollary lessons throughout your adventure to ice the dickhead cake. While not bearing much impact on the gameplay itself, they are just as corrosive to a child’s morality, and complement the lifestyle promoted in these games quite nicely.

Being shallow is acceptable, if not advantageous. People will judge and/or attack you based on your style choices and assocations. Hey, you’re not wearing shorts!

Make certain one of your friends is enormously fat, regardless of the dangers to their health. This will make you look skinnier, and therefore more attractive, by comparison. Additionally, the obese are almost always the funniest people around. Surely, you’ve noticed the trend. John Candy? Chris Farley? Jim Sterling?

Make sure another one of your friends is ready, willing, and able to sleep with anything. These sorts of allies are great for “introducing” to potential assets you otherwise cannot crack. One caveat: never, ever hit that yourself, whether or not you know where it’s been.

Living sexy is even better revenge than living well. If you were the kid who got beat up on in school because you were puny, hit the gym and then get back in touch with your former tormentors. If you were the ugly/fat girl, you’ve got five years after graduating to try on an eating disorder get a makeover before you show up at your class reunion. Power is sexy, and sex is power, respectively.

There you have it. Pokémon is transforming our youth (and, in many cases, our less-than-youthful) into a new world order of sociopathic bastards, and by now it would seem the higher-minded among us are helpless to stop this multimedia juggernaut.

If that isn’t wrong, then I don’t know what is.