Miss Hollie Bennett and I grabbed the opportunity to see CD Projekt RED show off The Witcher 2: Assassins of Kings the other day. The first game was a big hit with PC gamers although I always got the feeling it picked up slowly as people discovered how amazing it was. Which was probably a good thing as it initially suffered from enormous loading times and quite a few bugs that have since been fixed in multiple updates and an Enhanced Edition. Hell, they even released it for free for the people that owned the original The Witcher.

To be fair though, CD Projekt RED didn’t exactly make it easy for themselves by adapting a universe from the Polish Wiedźmin fantasy books and short stories. Nor can it have been easy to produce a good-looking game like The Witcher using the aging Neverwinter Nights Aurora engine. But apparently, they learned a lot from the whole process and are hoping to fix and improve on everything by using their own new engine. Check out how it’s seemingly all falling into place.

What we saw was split up into two parts. The first was a gameplay demonstration of the Prison Escape scene, which you may have already seen in the latest trailer about non-linear narrative. If you haven’t then you should, because it probably has the greatest trailer title introduction in recent history. Hell, I’ll even add it for you because you are lazy. It has boobies too, just so you know. And in case you don’t know anything about the game at all, check out Conrad’s impressions from back in June. Now that you are all caught up, let’s get into some details the trailer doesn’t show explicitly.

In a nutshell, Geralt is in shackles which have already been loosened because of story-related reasons. So the part you can see in the video is not the beginning of the game or anything. How you escape from your cell and the dungeon is up to you. The option we saw had Geralt grabbing the attention of a guard, antagonizing him in the dialogue selection and then breaking free to rain down a hand-to-hand blitzkrieg on the poor guard.

This hand-to-hand melee fight was actually a quick time event, which made me wonder if all of the weaponless melee combat would be like that. Thankfully, the guys from CD Projekt RED assured me that even though there are QTEs in certain sections of the game, they only added them where it fits and to spice the game up a little. It’s just there as something on top of the main combat system, to give certain encounters that extra little “Ok, Geralt is pretty damn awesome” touch. Although I’m not the biggest fan of QTEs, I have to admit that it did look pretty sweet to me as a bystander. 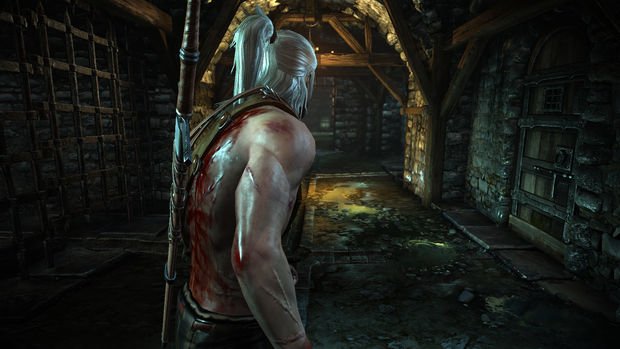 We also got a short peek at the new inventory system, which looked a lot cleaner than in The Witcher. Weapons, armor and rings now go into sockets around a picture of Geralt instead of on top of his picture in the first game. If you didn’t play the original, think Baldur’s Gate style but with a larger image of the character and the weapon slots are located next to where his sword, amulets next to where an amulet would go, etc. It looked a bit better than before; nothing revolutionary but it was just good looking and perfectly serviceable. Sadly, I didn’t remember the old inventory that well and didn’t look at the way the satchel and alchemy sack are done this time around. It did look like they are taking it very seriously to make all aspects of the game an improvement over the first.

Having escaped from his cell, Geralt has to make his way out of the prison. This is where the non-linearity and player choice comes into play. Do you just go on a rampage, killing every guard in sight? Or do you take the stealthy approach, extinguishing torches to create darkness and then breaking necks from behind? Geralt’s magic medallion allows him to see enemies in the dark  with a glow and also highlights things like water, which creates noise if you walk through it. 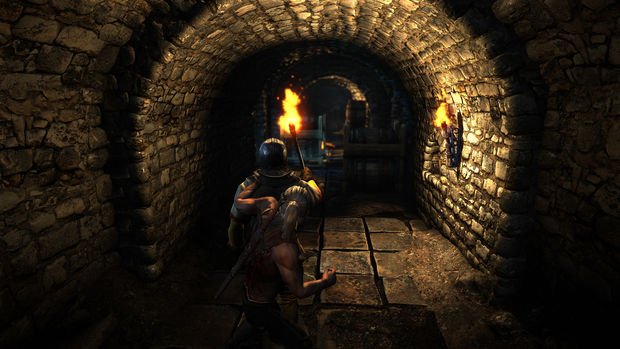 After dispatching some guards all stealth-like, Geralt overhears a woman in a prison cell who seems to be in slight discomfort. Looking through a hole in the wall, it appears that the discomfort is due to her being half naked and being tortured. By a man, sadly. If you choose to rescue her, it turns out that she is actually the mother of a character from The Witcher who may or may not have died alongside your travels. I only saw the The Witcher being played by a friend for a couple of hours because my PC was too shitty and because I didn’t have the time to play it when I finally had a better PC, so I’m not entirely sure if that character could stay alive or not.

In this demonstration, that character had apparently died, because the woman asks you how her son died. You get dialogue options in the range of “he died a hero” to “just another body” for the nice and dick approaches. From what I remember, The Witcher did have excellent morality dialog choices that weren’t black or white, so perhaps I’m not giving it enough credit here.

Choosing to free the woman pays off a bit later on, as you encounter the Nilfgaardian Elite who can be persuaded to help you escape. That is, by means of this woman’s help to persuade them. And no, she had already put on clothes by now, so it’s not that kind of persuasion! Apparently the woman was an important figure in the story or something. 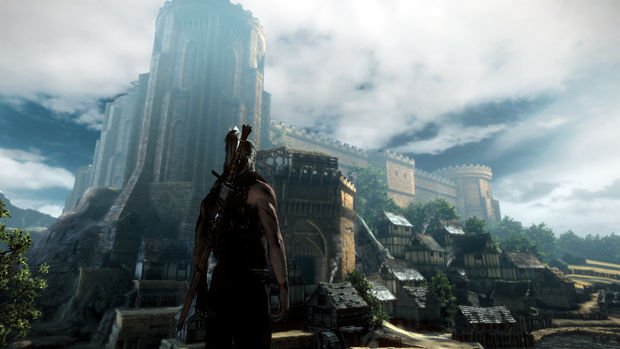 The Elite do their job and help you escape, after which you exit the prison. And then … you suddenly exit into a bright and colourful world without any loading screens whatsoever! This came as a shock to me, after having seen many minutes fly by when I watched my friend play through The Witcher a few years ago. Apparently this is one of the big advantages of the new engine; loading screens will only be there between big areas and when starting the game and such.

Another advantage of the new engine is that while the inside dungeon looked good but not mind-blowing, the outside world looked amazing. The sheer scale of the area, which is entirely made out of places you can explore yourself rather than mere set-pieces in the background, is something you’ll have to see for yourself. The fact that it loaded progressively without a loading screen only made it more impressive.

Graphically, The Witcher 2 shines as a PC game. You get all the nice distance-blurring effects, great lighting, highly detailed textures and all the things you’d expect by now. In fact, it was easily the most impressive-looking new game I saw at Eurogamer. It does help that I am a graphics whore, so take that as you will. The developers didn’t mention if it was a DirectX 11 game, but I wouldn’t be surprised if it supported it. 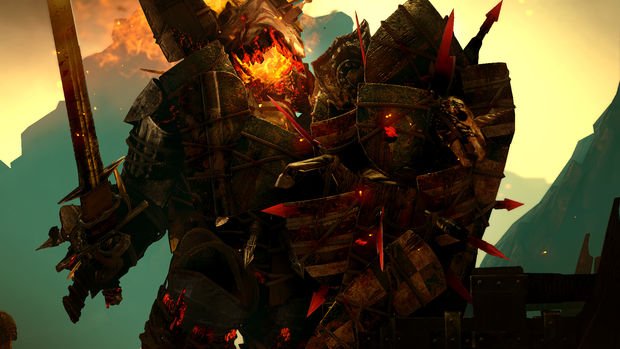 The second part of the demonstration focused on a kind of boss fight. Geralt is walking around on a cursed battlefield where spirits are fighting an eternal battle on what feels like a huge plains area. If you move close to the spirits, they vanish into smoke. Particles effects in particular were all over the place.

After dispatching a few Wraiths, golems made out of the weapons and armor left over from the ancient battlefield, Geralt is confronted by a Wraith general called Draug. This towering boss doesn’t only smack you around with melee attacks, but also calls in archers who rain down arrows you have to hide from by using scattered wreckage in the terrain. Draug also tends to transform his form into a whirlwind of weapon and armor pieces, which means one thing: run the hell away!

Oh yeah, and he calls in artillery in the form of giant fireballs that rain down from the sky. There were also nice little details, such as pieces of armor that fall off Draug as you do damage, giving you some nice visual feedback on the health status of the boss. I think it’s safe to say that boss encounters using the new engine will be more than epic enough, if you want that in your action RPG.

Even though we only got a taste of The Witcher 2 in alpha form, I have to say that this is definitely something to keep your eye on. If you played the first game then you already knew that, but feel confident that so far it looks like everything you probably want from the sequel. The combat seemed smooth and refined over the original. The fact that the developers shrug off things like QTEs and stealth as “just little things we added to make it more fun” only adds to the confidence that at the core, they already have a solid game in their hands. 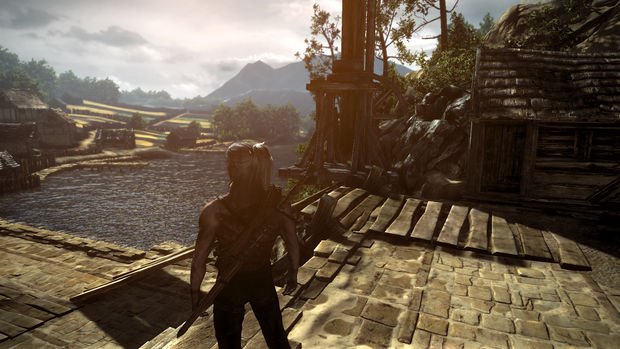 And if you were tired of The Witcher‘s fetch quests, they are scrapping them in favour of more fun quests. The Witcher 2 will apparently be about the same length as the first one, which was pretty damn long to start with. Finally, you will be able to import your save games so take the time until the release to get your multiple playthroughs in order. Since the story of The Witcher games is set in the Witcher universe after the books, the story implications of choices and importing save games won’t affect the source material story.

CD Projekt RED definitely sounded like they know what they are doing, that they learned from flaws in the first game — and that all they want to do is give you the best sequel they can make. To top it off, The Witcher 2 should run on mid-range specs by the time of release. Which means high-end specs right now. That’s fine with me, because most games run fine on my one-year-old mid-range PC and I didn’t see any reason to upgrade within 6 months anyway. If it’s about time for you to upgrade right now however, it might be something to keep in mind.

Overall, everything looked as good as you could have hoped for. Between this and Dragon Age II in 2011, the PC is looking at some great story-driven RPGs to make us feel better about our graphics card expenses. Hopefully we’ll see it on consoles as well this time around, but I wouldn’t hold my breath on seeing a release any time soon. In the meantime I say: bring it on and let that quad-core and GTX 480 sweat! If only I could afford it, eh?