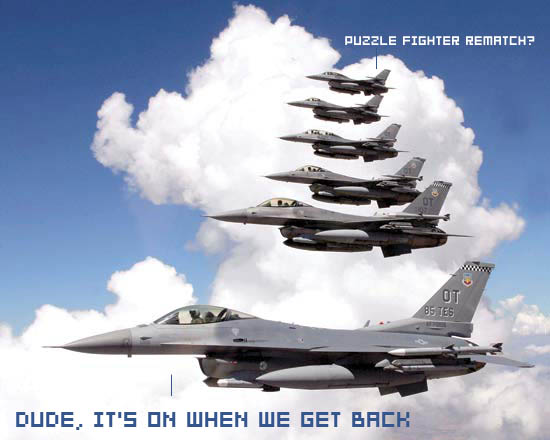 Off they go, into the wild blue yonder… apparently for “research.” Riiiiiiiight, research.

The gamer in me want to think that they’re setting up for the First Annual Armed Forces Super Puzzle Fighter Tournament, but I guess they actually do some real work there too. According to Gizmodo, it seems that the USAF is wanting to fudge around with the Cell processor. “Assessment” is what they’re saying. They’re also looking to save a buck or two in the process of this assessment (really? the US government?), and the PlayStation 3 is the only item that gives them these materials at an “acceptable cost.”

A government presolicitation notice lays it all out:

The Air Force Research Laboratory is conducting a technology assessment of certain cell processors. The processors in the Sony PlayStation 3 are the only brand on the market that utilizes the specific cell processor characteristics needed for this program at an acceptable cost.

Hushed Casket says that a machine codenamed “Roadrunner” was to be built in 2006, and it was slated to use Cell processors. I can’t even imagine what a “Roadrunner” is, but I think it’s kind of messed up that buying 300 40GB PS3 game consoles would be cheaper or easier than buying 300 Cell processors direct.

What do you think the Air Force is doing with all of these PS3s?

Hey, US Air Force. If you’re not going to use those 300 SIXAXIS controllers, please send them to me.