I haven’t watched a reality TV show since the inaugural season of “Lost.” I didn’t like it. I thought the winner should have been the bald voodoo doctor instead of whats-his-hole, the guy who generated sympathy by doing his sister.

I can’t say the first episode of Sony’s “The Tester” is doing much for me either, but that’s only because my boy, the suit-and-vested “Barmy,” was kicked off despite his intimate knowledge of parrots and firm grasp of social relationships.

What Is This Thing?

“The Tester” is about 11 nerds who want to become a game tester for SCEA. Most are thinking about it as a stepping-stone, ignoring just how difficult and demanding a test job can be. Whisked away from their basements, these folks are living in a “fabulous” lounge provided by the show, outfitted with several PS3s and all sorts of “Real World”-style garbage like multi-colored walls and gaudy decorations.

In each episode of downloadable series the contestants will take part in an event designed to gauge their game-testing mettle. Three judges — SCEA’s Brent Gocke, the 1990’s Hal Sparks, and a guest judge — evaluate the contestants in each competition. They also decide who goes home after performing poorly in a given event.

This week’s competition was a “Spot the Differences” game. Forgoing the Highlights magazine approach, the show had the contestants picking out differences in two pictures from the glow of a large theatre screen. The show also had each contestant do it from a dentist chair, because, well, that’s what real testers sit in.

The event took place in the brilliant “The Tester” HQ, which is something like a poor man’s apartment in the Tower of Solitude. The three judges stayed in the room, surrounded by its decorative subwoofers, to really get a feel for who did what in the 90-second allotment. 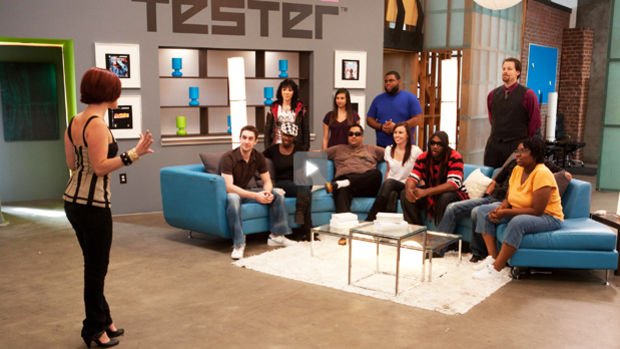 This week’s “The Tester” kicks off by introducing us to some of the contestants with that familiar alone-in-the-room commentary thing all the reality shows do. We meet “Star” first. She’s a pro gamer, and like, she’s totally going to fight for the prize. “Cyrus” is a quiet guy who believes the opportunity to become a tester is “perfect” for him. In the closing introductory seconds we catch a brief glimpse of the enigmatic “Goof,” the ever-nervous Bronx-gal “Luge,” and the big jokster “Doc,” who bombs the hell out of this week’s challenge as he nervously mutters “I’m hungry” instead of bothering with what is at hand.

The Funniest Sad Moment of the Show

“Star” is ranked in Guitar Hero or something. After discovering this fact, the group, instead of playing it cool, decides to scream and point like she has a gun until they’re ushered out of the room.

Most of the people sucked at the game. Turns out that “Luge,” the Bronx girl, didn’t. She recorded the highest while our man “Barmy,” “that guy,” and “that girl,” did not. The clever camera work kept us from understanding the true nature of how badly they performed.

The judges weren’t kind to “Barmy” and “whats-her-hole,” telling them that they couldn’t handle the pressure of being in a strange room and surrounded by multiple cameras. As such, they couldn’t be the Tester.

“Barmy” cried during his exit interview. He told his family, which he surprisingly hasn’t killed or devoured yet, that he hoped they were proud of his progress.

– Next week David Jaffe is the guest judge and the event has something to do with big ass rolling balls. We’ll definitely be tuning in.