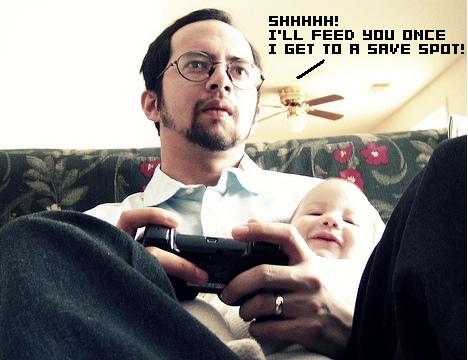 It’s Father’s Day! Instead of giving your dad a “funny” card or a(nother) tie this year, how about hanging out with him and playing some videogames? Better yet, instead of sitting on the couch arguing about politics or watching the basketball finals (those are still on, right?), why don’t you both discuss who you think are the best videogame dads of all time? And what a coincidence, I happen to have one of those lists right here to help you get started!

From Pac-Man to Jecht, trying to narrow down the best videogame dads of all time was surprisingly tough. Not only were there a lot to choose from, but most videogame fathers are … let’s just say they wouldn’t make the best Little League coaches. They may be great characters, but that doesn’t really make them good dads.

So who made the final cut of perfect digital patriarchs? Hit the jump for a list of the ten best videogame dads … ever.

Dr. Fred Edison is a horribly misunderstood father. Sure, he raised his family in a house with “maniac” in its name, but at least he provided them with a roof over their heads (and a mansion at that). True, he tries to lock trespassers in a dungeon, but doesn’t that just make him protective? And, yes, he is technically a mad scientist, but wouldn’t you be proud if your dad was a doctor?

Although he may look different than most fathers, Dr. Fred is still one of the best dads around, supporting his odd but loving family through good times and bad.

Oh yeah, and he also built a frickin’ time machine in the sequel Day of the Tentacle. I bet none of your fathers have ever built a time machine.

To talk about Big Boss and his complicated family history is to ruin the plot of one of the best videogame series of all time: Metal Gear. So I will try my best to give you the background on this fascinating character without ruining too much.

To most people, Big Boss is a villain and horrible father, as he tried to kill one of his sons, Solid Snake, in the first two Metal Gear games. But as fans of the series learned in Metal Gear Solid 3, Big Boss is actually a good man and loyal soldier who just got mixed up (to put it mildly) with the wrong group of people.

Most importantly, his three sons were actually cloned from his DNA and implanted into the egg of a surrogate mother, making Les Enfants Terribles almost perfect genetic matches of their father. He may not have been the best fatherly figure to Snake, Liquid, or Solidus, but Big Boss is easily one of the most fascinating and influential videogame dads of all time.

While not a dad in the normal sense of the word, Dr. Light was responsible for building Mega Man, making him the closest thing to a father the little blue robot will ever know.

Originally created to be nothing more than a robot assistant, Mega Man was upgraded to action hero once Dr. Light’s rival, Dr. Wily, created his own army of robots to take over the world. Despite putting his “son” in danger, Dr. Light is always there for Mega Man, supporting him with power-ups and hints whenever needed.

Extra points for building Roll, a sister for lonely

Fathers everywhere would do anything for their daughters. In the case of Mike Haggar, that “anything” is running through , tossing oil drums and beating up bad guys at every turn.

At the beginning of Final Fight, Mayor Mike Haggar is calmly sitting in his office when he receives a message that his daughter has been kidnapped. Instead of sitting back and negotiating, Haggar takes matters into his own ginormous hands.

Rule #1 of kidnapping: Don’t kidnap the daughter of a man with pecs the size of basketballs.

When the party meets black mage Tellah early on in Final Fantasy IV, his character appears to be nothing but a frail, crazy old man on a nonsense quest. It is eventually revealed that Tellah is one of the most skilled wizards on the planet and is journeying to take back his daughter Anna, who eloped with a “spoony bard” by the name of Edward.

When Anna is killed seconds before Tellah reaches her, the old sage does everything in his power to exact revenge on Golbez, the man who murdered her. Sadly, this obsession with avenging his only daughter eventually leads to Tellah sacrificing his own life.

Despite his tragic end, Tellah remains one of the most loyal and caring fathers of all time.

Some of the scariest and most incredibly well-designed characters in videogame history are the Big Daddies from BioShock. While these lumbering beasts appear evil, they were created for the sole purpose of protecting the Little Sisters, young girls who have been implanted with powerful levels of ADAM, a mutagen that allows genetic change. In fact, the Big Daddies will not harm a fly unless their “daughters” are threatened.

Although they never speak a word in BioShock, the Big Daddies express the perfect traits of being good fathers through their actions alone. The Little Sisters are lucky to be protected by such surprisingly gentle giants.

I would apologize for the horribly blurry image used above, but the lack of a clear picture is one of the reasons James McCloud is such a memorable character. The father of Star Fox star Fox McCloud, James McCloud was supposedly killed years before his son got his paws behind the controls of an Arwing.

In a classic sequence, at the very end of Star Fox 64 for the Nintendo 64, right before Fox is blown apart by a self-destructing fortress, his assumed dead father James McCloud flies in to save the day. Using his own ship as a guide, James leads Fox out of the exploding structure and to safety, only to disappear into space seconds later.

Even though he is as elusive as, well, a fox, James McCloud risks his life to save his one and only son.

Best dad ever. Done. Let’s move on before I start crying uncontrollably.

2. King of All Cosmos (Katamari Damacy)

Please look at the above image and try to think of a reason that King of All Cosmos is not one of the greatest videogame dads of all time. Seriously, look at that image. You can’t deny its greatness, can you? Even though you will never admit it, you kind of want your dad to start dressing like that, don’t you?

Yes, the King of All Cosmos is always yelling at his son. But instead of being disappointed, the King only raises his voice because he wants his son, the Prince, to be the best that he can be — more specifically, to roll the biggest Katamari he can. And as gamers everywhere learned in We ♥ Katamari, everything the King of All Cosmos and his lovely wife the Queen do is out of love. And rainbows. And roaring lions on giant mushrooms.

This should come as no big surprise — I picked my mom Denise as the best videogame mom a month back. Before you all start screaming “UNORIGINAL,” just hear me out for a second.

My dad is the best videogame dad of all time for many different reasons. Besides being unbelievably supportive with my videogame obsession and not being mad when I wanted to play Wizards and Warriors instead of catch, looking back at this list, he actually possesses things in common with all of these famous videogame dads.

For example: Like Dr. Fred and Dr. Light, my dad is extremely intelligent; like Tellah and Big Daddy, my father is very protective; and like Big Boss, my dad also tried to kill me in .

So, in a way, my dad is a combination of some of the best videogame characters of all time. Not only is that awesome (!), it makes me care about him even more than I already do.

I may have not been the best athlete, dad, but I hope I made you proud. I know for one that I am extremely proud to be your son.

Just don’t try to kill me in again. That’s all I ask.

I love you more than words, Dad. Happy Father’s Day!