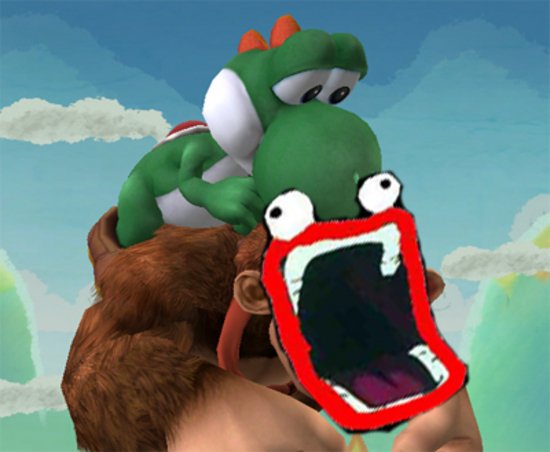 Lets get right into the recap, shall we? Monday brought the news of a new stage. Think back to Melee and the Ice Climbers stage. Now take out the snow, add the jungle and that’s what you get with this new level based on Donkey Kong. Tuesday brought the return of Yoshi and the news that he will have a third jump finally. It’s funny to note that at the end of the Tuesday update, Masahiro had this to say about Yoshi:

That’s enough to earn him a hearty welcome, isn’t it?

On Wednesday, another new stage was revealed. It’s called Sky World and is Pit’s level. The main floor on this level breaks easily so should be a great level for the flying characters. The best piece of news was revealed on Thursday with the new technique called Footstool Jump. As your character jumps on top of another character, you can use your enemy as spring launcher and jump off of him. From the screens, it looks like your enemies will get paralyzed for a little while as well. It seems you’ll also be able to use this technique as an attack called Meteor Smash. Finally, on Friday, a new Assist Trophy was revealed from the Kirby universe. His name is Knuckle Joe, and was the character Kirby could eat to give him fighting skills (which often resembled Ryu’s from Street Fighter fighting style).

Pretty much a dull week at the DOJO!! The most interesting news was the Footstool Jump. From the sound of it, it’s going to be real easy to be a cheap bastard. Imagine if your trying to jump back to the battlefield after getting knocked off stage only to have someone jump on top of you right before you make it back and get paralyzed mid-air.