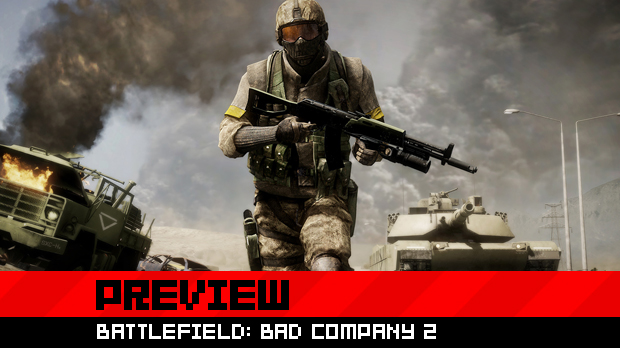 Rush on through the jump to hear about the new toys you’ll get to mess with, the new perk-like system and to see just how gorgeous Bad Company 2 is shaping up to be.

Only one map, Arica Harbour, was available to play on, and you can’t help but check the surroundings out the first time you jump into Bad Company 2. You can tell right off the bat that the Frostbite Engine has definitely been improved. There are mountains off in the distance and the ocean west of the map, and a ton of attention to detail is evident in the environment you’ll be running around — and completely demolishing — during your rush to protect/destroy the crates.

Before and during matches, you’ll be able to pick from one of four available classes: Assault, Engineer, Medic and Recon. Each class has a different set of weapons and Gadgets:

On top of those weapons, each class can hold a pistol of some kind as their secondary weapon, a couple of grenades, a knife and up to three Specs. Specs are basically what Perks are in Infinity Ward’s Modern Warfare series. We only got to see a few Specs, such as better radar, increased armor on tanks and a better scope on the sniper. Hopefully we see a Spec for faster reload times, as it takes a ridiculously long time to reload your weapons.

Up to 24 people can play in the multiplayer on the Xbox 360, PlayStation 3 and PC. Each side will spawn at their respective locations, where they’ll have some weapon emplacements and vehicles waiting for them.

As the attackers, you have a total of 100 lives between your team to take out all eight enemy crates in order to win. To destroy a crate, you need to plant an explosive charge on the thing or use the tank to shell it. When a explosive is planted on the crate, sirens go off, alerting the defensive team. They get a chance to disarm the bomb. If the first two crates are destroyed, two more will pop up somewhere further into the map, which also opens the map up more. The attacking team will also gain more lives for successfully destroying crates.

The defensive side has it pretty easy. All they need to worry about is defending the two crates from the attackers. They have infinite lives, and they also have the advantage of spawning near buildings, which provide some nice cover against the attackers (who tend to have to be out in the open to get near the crates in this level). Defenders just need to protect the crates and kill the attackers until they have no more lives left.

As you play, you’ll earn medals, awards and experience points. The more experience you get, the more bonuses you’ll be able to outfit your soldier with. You’ll earn new weapons, new Gadgets and new Specs as you level up.

Fans of the original Bad Company will no doubt like the new features and improvements in Bad Company 2. The build I played was in the pre-alpha stage, so there were some issues here and there. Most of it was visual stuff, and it didn’t hurt my experience with the game. My one complaint with what I got to play is that it sometimes takes a while to get from your spawn location to the action. There were a number of times when I would have to hoof it to where everyone was fighting, as all the vehicles were gone. It doesn’t take too long to get to where you want to go; it’s just boring, since there’s no one to shoot until then.

Bad Company 2 will be out in March, but if you can’t wait that long and own a PlayStation 3, then you’re in luck! There will be a multiplayer beta on November 17 of the level and mode I just previewed here. Be sure to check out the beta announcement post to see where you’ll be able to get your hands on a beta code.