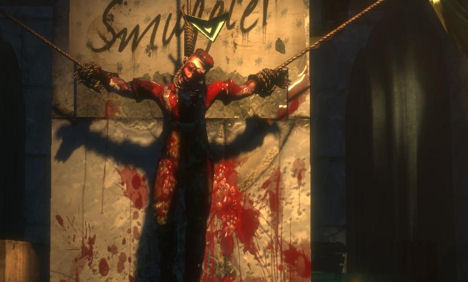 Whether you like it or not, a sequel to the 2007 original IP of the year, BioShock, is marching with irresistible inevitability to our consoles. Some gamers can’t wait to return to the underwater city of Rapture and do it all over again, while others are more guarded and dread the soulless franchise machine’s potential death-knell for one of recent gaming’s most inventive and unique adventures.

Regardless of which you camp you fall into, it cannot be denied that a number of potential problems face those who would create a sequel to a game that stood up so well as its own complete package. The trouble is, when your motivating aim is money, you’re not going to be too careful about the pitfalls, and I have a feeling Take-Two will stumble into every single one.

[Warning: Contains spoilers. I can’t believe I have to type this]

The first problem facing anybody creating a BioShock sequel is the fact that the original game was such a well crafted story with a beginning, middle and end. With its backstory drip-fed throughout your progress in Rapture, and a pair of potential endings that pretty much wrapped up the whole experience, it’s incredibly difficult to artistically justify a return to the setting.

Imagine, if you will, a direct sequel to Silent Hill 2. This was another game that, although part of a franchise, exists in its own narrative bubble. It is still one of the most engrossing videogames out there, and it’s due in part to the fact that we have thus far not properly returned to that particular chapter in the Silent Hill mythos. What would a direct sequel to James Sunderland’s Silent Hill exploits achieve? For a game so perfectly wrapped in its own package, opening that box up once again runs a risk of spilling the contents everywhere.

BioShock is quite similar. Like Silent Hill 2, its isolated story arc is well paced and ends definitively. Like Silent Hill 2, there are many hints at something grander in scale than your own particular adventure, but because all we see are hints, it makes the game far more engrossing. Only seeing slight glimpses of Pyramid Head, just like only seeing a handful of BioShock‘s Big Daddies, adds an element of mystery that makes them scarier and more captivating than they would be if we knew absolutely everything about them. A sequel’s job is to typically expand a franchise’s roots, but when your roots are so enjoyable because they’ve not been expanded, we’re faced with a problem.

It is believed by some that the next BioShock game will, in fact, be a prequel that shows the fall of Rapture. If a sequel’s expansion of the BioShock world is damaging to its ability to engage the player, however, a prequel could damn near kill it. Those in favor of a prequel fail to grasp the true story of the original BioShock — the fall of Rapture.

Although there is a “present day” storyline in BioShock (find and kill Andrew Ryan/Frank Fontaine), the main draw is the discovery of what exactly went wrong in this proposed perfect utopia. As you progress throughout Rapture and collect audio diaries, the past of Ryan’s city is perfectly rendered, with just enough held back to keep one’s imagination fired up. In essence, BioShock is a prequel in and of itself — its story fills in BioShock‘s past and details its fall, but doesn’t give too much away. Showing us what we already know — only without the need for our own imagination this time — is not only unnecessary, it’s downright vulgar.

I’m a big proponent of never sharing with the audience too much. If you give a face to the devil, the devil doesn’t scare you anymore, and if you suck all the mystery out of your world, there’s very little to keep someone caring. BioShock explained much about Rapture, but it didn’t explain everything. Returning to Rapture can only run a risk of explaining everything and taking away so much of what made the city enthralling.

Arguably the most defining moment of BioShock was “the twist,” the one where everything about your adventure is turned completely upside down. You realize you are little more than an oblivious slave, who has been prompted to act by your “friend” saying “would you kindly” over and over again. It was such an amazingly crafted surprise that could have ended the game there and then, and I foresee attempts to recreate that scene in a sequel.

A lot of people in the games industry fail to grasp the simple idea that magic can’t be bottled, even though history is littered with examples of failed attempts to do so. With the twist being such a huge factor in BioShock, it will be almost impossible to have a sequel that doesn’t try and recreate the shock factor, but let’s face it — we’re all expecting it now.

It’s a “damned if you do, damned if you don’t” scenario. Either BioShock 2 has a twist in a cynical attempt to recreate the shock of the first game, or it does nothing and fails to have a jawdroppingly memorable moment. Gamers will either roll their eyes or wonder why there isn’t anything as shocking as in the first game.

This is true of many things in Rapture — some of its greatest triumphs aren’t suited to retreads. What about the Little Sisters, a huge part of the original game? Will 2K Games rehash the “kill or save” scenario all over again? It could potentially happen, and it won’t be half as interesting this time. There is little doubt that the Big Daddies will return, but once again, we’ve already seen what they can do, so either it’s the same old story, or they’ll introduce different types in a desperate attempt to keep them fresh.

I am not 100% against a BioShock sequel, and won’t fully condemn the idea until I see something worth condemning with my own two eyes. What I am saying, however, is that these pitfalls are real, and very very big, and it will take care and subtlety to navigate the treacherous path. Sadly, however, I have very little faith in the videogames industry when it comes to care and subtlety. After all, as I explained, this is about the money — the first BioShock turned a profit, and Take-Two wants to “bottle the magic,” as I talked about earlier.

At the end of the day, none of us own BioShock, and it is not for us to dictate what 2K Games can and can’t do with its own franchise. A movie is confirmed, and the publisher already speaks of releasing a new BioShock once every two years. It is officially a franchise, one that is going to be milked until its teet becomes dry and gives out nothing but dust. Who knows? Maybe all these new games under the BioShock banner might actually be good, and maybe the movie won’t utterly rape an IP that so many of us have grown to hold in very high regard.

In a most ironic twist, however, I can’t help but feel that what happened to Andrew Ryan’s Rapture will, in turn, happen to Ken Levine’s BioShock.