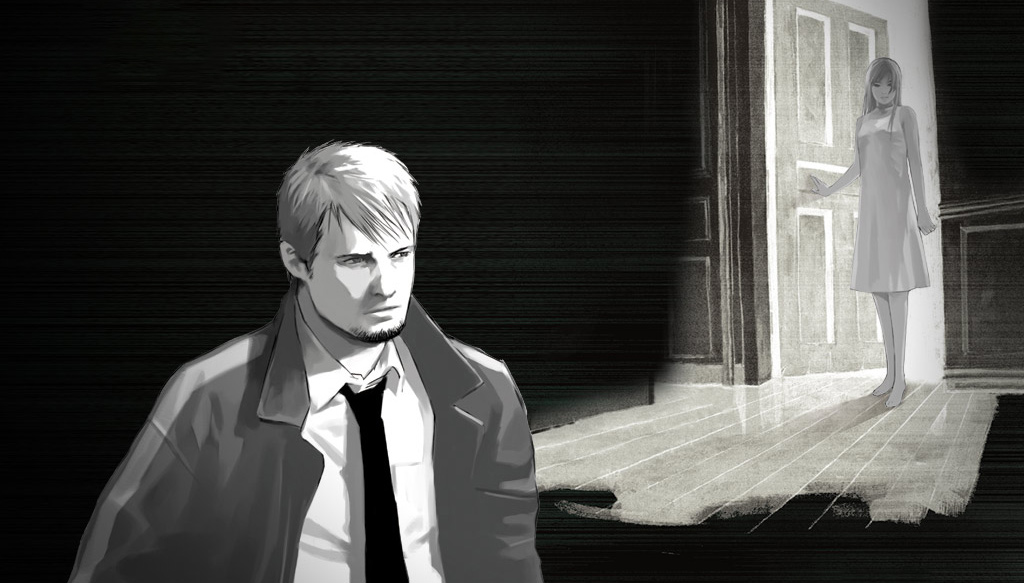 When the Nintendo DS came out it was full of new and exciting features never before seen in a videogame system. Sadly, most of these features — in particular the touch screen and microphone — were not perfected until almost a year after the popular handheld’s release.

But once the features were perfected, designers found ways to implement some pretty amazing things into their games. While most of these were impressive, some innovations took things to the next level — a level most didn’t even know existed — and completely changed the way people experienced a videogame.

One of my favorite gameplay innovations of the last few years occurs in one of the most original games for the Nintendo DS, Hotel Dusk: Room 215. In addition to it being an incredible adventure game on its own, Hotel Dusk shines by constantly blurring the line between player and videogame.

Let’s experience a moment that doesn’t just knock down the fourth wall — it busts right through it like the Kool-Aid man.

Don’t let the boring and uninspired box art fool you, Hotel Dusk: Room 215 is one of the most stylized and authentic games on the Nintendo DS. Right from the start, Hotel Dusk secures its authenticity by asking players to turn the DS on its side, much more like reading a book than playing a videogame. It is in this surprisingly comfortable position that the entire game is played.

In the game you play as Kyle Hyde, a police officer who leaves the force once his ex-partner ends up missing. Getting a new job as a shady salesman, Kyle Hyde is sent to the mysterious Hotel Dusk at the very beginning of the game in order to sell some things for Red Crown, the company he now works for.

Although Kyle heads to Hotel Dusk for his job, his ulterior motive is to find out more information on the disappearance of his partner, whom Kyle could have sworn died in a violent confrontation six months earlier.

Upon checking into Room 215, Kyle learns from the owner of the hotel that someone checked in weeks earlier using Kyle’s exact same name.

Perplexed, but unable to gather a reason for the huge coincidence, Kyle settles into his dimly lit room, not knowing that a twist-filled adventure awaits him.

Throughout the game, Kyle meets many interesting characters who may or may not be connected to him in strange and unusual ways. Utilizing all the traditional gameplay of a classic adventure game, Hotel Dusk: Room 215 requires players to travel the large hotel in search of clues to help Kyle solve the mysteries of his past.

One of the characters Kyle meets is a young, spoiled girl by the name of Melissa.

Melissa loves to do jigsaw puzzles, and the first time Kyle encounters her he is asked to help the girl finish one of her favorite puzzles – one adorned with the image of a pink rabbit.

This is when the traditional features of the DS come into play. By dragging the puzzle pieces all around the touch screen, the player can put together Melissa’s puzzle, making her slightly trust you in the process.

Once the puzzle is complete, Melissa cries for seemingly no reason and runs away, leaving one single puzzle piece behind.

After grabbing this lone piece and rotating it around (using the touch screen, of course!), Kyle discovers a little bit of writing on the back. Unfortunately, the message is incomplete and cannot be deciphered.

Packing the puzzle piece away with his other random adventure game items, Kyle continues on his journey to find out more about his missing partner in relation to the mystery-filled hotel.

The next Memory Card moment occurs when Kyle runs into Melissa again later in the game.

After returning her lost piece, Melissa “thanks” Kyle and tells him a little bit about her past. Kyle learns that Melissa’s father is a surgeon and her mother went missing years ago. Maybe that explains why Melissa is always crying!

Melissa then asks Kyle to help her with the same puzzle he had completed earlier in the game (now that the missing piece has been returned to her). This time, however, the final image of a pink rabbit on the finished puzzle means a lot more. Melissa tells Kyle that she loves pink rabbits and her mother gave her this puzzle as a present when she was just a baby.

At this point, Kyle (and the player) remembers that there was something written on the back of the single puzzle piece Melissa had left behind earlier. Does this mean that the entire message can be read on the back of the assembled puzzle?

Finding an answer to that question is where things get tricky.

You see, the puzzle has been completed on the touch screen and now completely covers one of the two DS screens. The only thing that can be done is to move the pieces around by sliding the stylus over the screen. No matter how much poking and prodding you do, there isn’t a function to flip the puzzle over on its back.

So how does one accomplish this task?

This is when the game does something pretty incredible.

As mentioned before, the puzzle is displayed right-side up on one of the DS’s two screens. The other screen is blank, showing the top of an empty table.

If the player actually folds the DS closed and then reopens it, the puzzle will have “flipped” to the other screen, now displaying its backside. Only when the puzzle is turned over in this manner can Kyle read the message handwritten on the other side: “Good Bye Melissa.”

The meaning behind this cryptic message reveals itself over the rest of the game (wait, so Melissa’s mother knew she was going to go missing?!), but I won’t ruin the amazing story in this post. Play the game for yourself to find out what happens! Trust me, you will be very happy you did.

You can watch the ridiculously awesome gameplay technique right here:

Although this “closing the DS” technique has been used on a few other games (The Legend of Zelda: Phantom Hourglass comes to mind) Hotel Dusk was the first time I encountered it.

And speaking of the first time I encountered it, I can’t even tell you how long it took me to figure this puzzle out. Of course I knew I had to flip the puzzle over to read the message on the back, but I had no idea how to do it. I tried everything: flicking the screen really fast with the stylus, blowing into the microphone. Heck, I even tried tiling the DS a little in the hopes the puzzle would slide or something.

Even though it seems so obvious and so intuitive in hindsight, who would ever think of closing the actual handheld to find a solution? There was no point of reference for me because this had never been done before!

Once I finally figured it out (and I don’t even remember how that happened), I was blown away. I had always been impressed by designers breaking the fourth wall in videogames – Hideo Kojima and his amazing Metal Gear Solid games always do this with such style – but this technique was taking things to a new level.

In Hotel Dusk, the flat image of the puzzle was being treated as an actual object; an object with dimensions; an object that is affected by actual space and gravity around it. By physically flipping the puzzle over, it actually “tumbles” onto the surface below (in this case, the other screen). Amazing does not even begin to describe how cool this is.

What impresses me most of all about this innovative puzzle is that it uses a feature of a videogame system not meant to be used for gameplay. The touch screen, microphone, and dual screen setup on the DS have been used in new and surprising ways, but those three features are meant to be incorporated into the gameplay. Closing the DS is just part of the design of the handheld, meant to protect the screens from scratching or put the system into “sleep mode.” It is not supposed to be part of the actual game. Well, with Hotel Dusk, it is … and it is so awesome.

It is so refreshing to see designers coming up with new and exciting things to implement into videogames. True, sometimes these concepts walk the line between revolutionary and gimmicky, but when they work they work well. Closing the DS in Hotel Dusk is one of my favorite gameplay innovations in recent years and will always be remembered as one of my favorite videogame moments of all time.