Sometimes videogame moments can be memorable without being very good. Take last season’s StarTropics Memory Card induction, for instance: I will never forget that damned submerged letter for the rest of my life, but that doesn’t change the fact that the whole concept left me a little confused.

This week, the dim, barely visible negative light of my memory shifts its focus to one of the strangest creative choices in videogame history.

Over the years, I can think of a handful of games that presented endings with unexpected and wholly fulfilling plot twists. While some of them may have been over-the-top, they still fit into the context of the established plot, making them at the very least mildly believable.

Even in the early retro days, when videogame stories weren’t a huge focus of the overall experience, a poorly realized — or, even worse, lazy — plot point still stood out like a sore thumb. One of these unfortunate moments occurs at the end of the quirky Super Mario Bros. 2 for the original Nintendo Entertainment System. Learn what not to do at the conclusion of an otherwise decent little videogame.

Like the aforementioned StarTropics, I actually happen to love Super Mario Bros. 2, despite some of its shortcomings. In fact, it is one of my favorite games from the golden (and sorely missed) NES era. 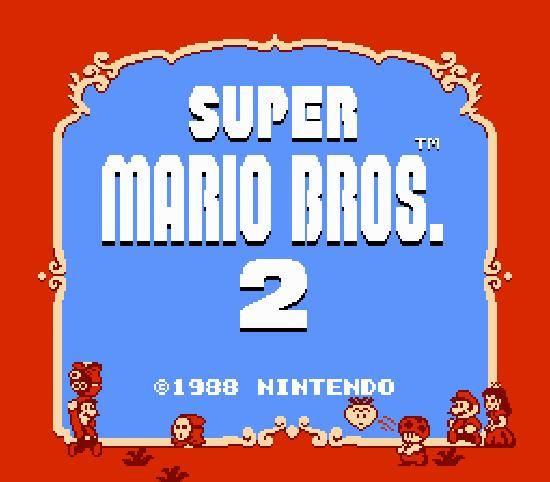 The first thing anyone will notice when playing Super Mario Bros. 2 is the game’s drastic change in style when compared to the original Mario hit. Gone are the classic brick-breaking and warp pipes of yore. the stuff that made Mario, well, Mario was replaced with a strange new world filled with creepy masked enemies and a lot of … vegetable plucking?

This huge shift in aesthetics is perfectly explained once you discover Super Mario Bros. 2 is actually a remake of the Japanese game Yume KÅjÅ: Doki Doki Panic, but starring Mario characters (the true sequel to the first Super Mario Bros. released only in ). 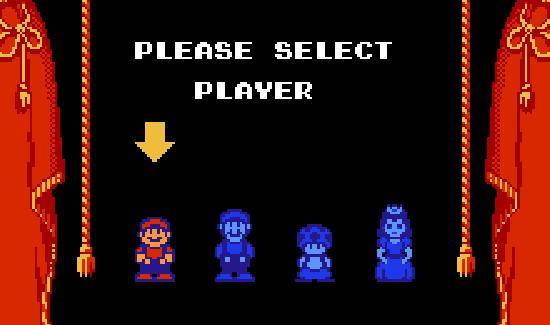 In the game, for the first time, you can choose between four playable characters: the well-balanced Mario, the high-jumping Luigi, the hovering Princess Toadstool, or the strong Toad. Regardless of who is chosen, the basic plot remains the same: the evil toad Wart has cursed the world of Subcon and it is up to the heroes of the to stop him. 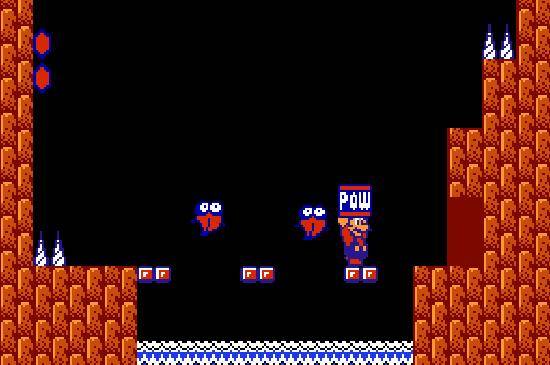 After playing through numerous, admittedly creative levels, you and your companions finally make it to the final boss, Wart himself. 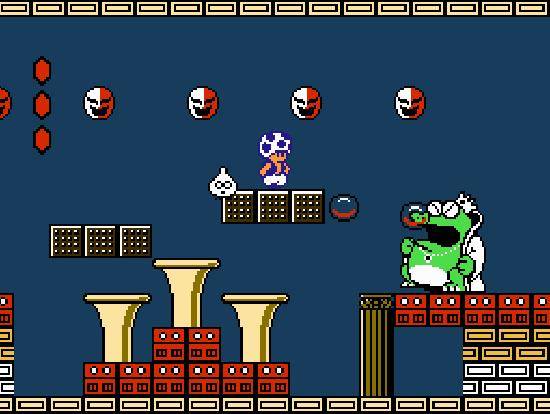 While the battle is nothing special (you throw a lot of vegetables, dodge a lot of bubbles), it is what occurs after Wart’s defeat that is a little … odd.

Once the malevolent toad falls, your chosen character makes his/her way through a magical door and into an open room. At the center of the room is a vase, sealed by an oversized stopper.

Immediately, your character hops on top of the stopper and pulls it from the decorated vase. From within, eight random fairies fly out, congratulating you for defeating Wart and saving Subcon from the horrible curse. 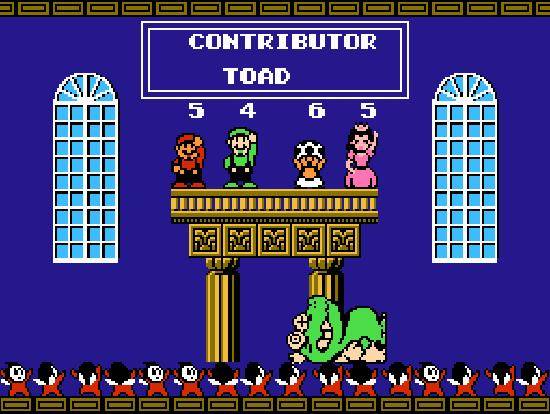 With no hesitation, a celebration in your honor begins (involving the morbid denizens of Subcon parading Wart’s body around for all to see/gawk at). It is after this celebration when the next Memory Card moment occurs — one that I am still scratching my head about.

As you, the player, are waiting for the strange celebration to continue on, the scene suddenly cuts away to Mario asleep in bed, a cute nightcap sitting on top of his head. In the corner of the screen, the celebration you just witnessed is displayed in a large, white thought bubble coming from the snoring plumber’s head. 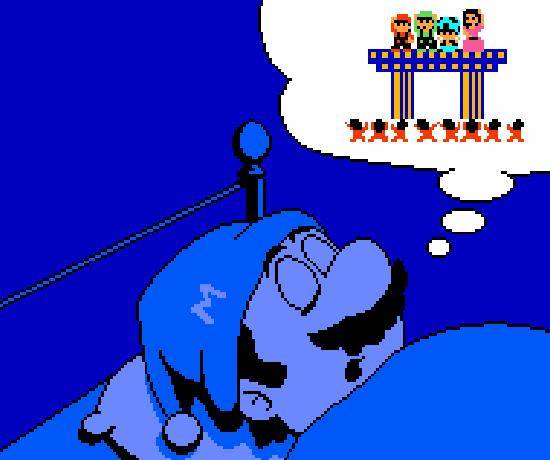 After a few moments, Mario wakes up for a second, bursting the thought bubble and all of its contents. It is at this moment that you sadly realize the entire game you have been playing was only one of Mario’s vivid (mushroom induced?) dreams. The entire adventure that established some pretty memorable characters (Birdo!) and encounters (riding on a magic carpet!) was all just in Mario’s head.

To make matters more disappointing, instead of something dramatic happening after Mario wakes up, he just goes right back to sleep as the credits start rolling, revealing the “cast” of the game.

As the last cast member leaves the screen (Wart), a final, cursive “The End” forms above Mario’s snoring face, sealing the fate of one of the strangest videogame endings of all time. 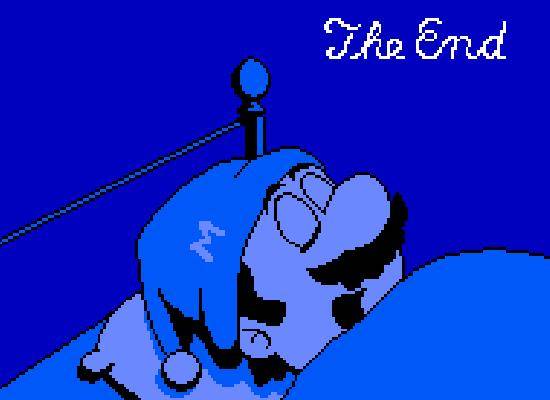 You can watch all the wackiness unfold here:

When I first saw the ending of Super Mario Bros. 2 as a child I never really thought twice about it. While I thought it was a little weird, it wasn’t until years later when I truly realized how much of a copout it really was.

Looking back, it is a pretty big slap in the face that Nintendo didn’t think the people of would be able to handle a game as challenging as the original sequel to Super Mario Bros. Replacing some characters from an already established game with familiar Mario icons is one thing, but adding on an abrupt ending ludicrously trying to explain why the game is so different than previous ones in the series is just insulting.

When I say “insulting” I don’t mean to sound so dramatic. It’s not like I’m really that angry about this decision or anything. As mentioned before, I love Super Mario Bros. 2 and think the ending (while crazy) is still totally classic. I just think it was an odd creative choice that boggles my mind, even today.

Think about it: when has the “it was all a dream” scenario worked well. In all other forms of media (film, television, stage), this technique is rarely used because of the negative reaction it always (deservedly) garners. Is the result of putting it in a popular videogame any different? The answer is obviously no.

Mario games have never been known for their strong stories or mind-blowing endings, so it is a little hard to fault Super Mario Bros. 2 for doing something so shocking or unfair. Heck, I guess just the fact that the Mario series tried something new is reason enough for some form of praise. But the ending is obviously (in)famous for a reason. If you ask a bunch of videogame fans on the street about Super Mario Bros. 2, I bet the same amount that knows how the game ends (read: all of them) will agree that the ending was rather disappointing and ultimately out of place.

Although not a lot happens, the ending of Super Mario Bros. 2 is easily one of the most memorable videogame moments of all time. Let’s just hope Mario doesn’t have anymore of these zany dreams in the future …