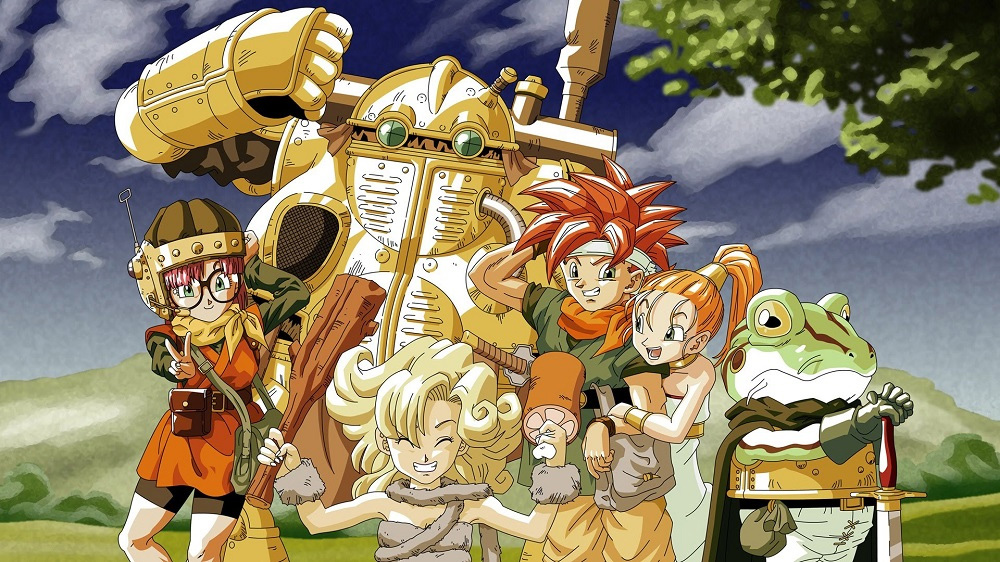 Polish up those trumpets, start decorating the floats — The Memory Card is back! After an extended hiatus between “seasons” (I blame the writer’s strike), the weekly feature that examines some of the most memorable videogame moments of all time is finally making its grand return. It missed you all so much.

Whether it is something as epic as saving the universe from destruction or something as seemingly minor as rescuing a kidnapped princess, the main protagonist of a videogame is always asked to be some kind of hero. And more often than not this “hero” (or “heroine”) will survive his/her great adventure and emerge victorious.

Once in a great while, though, a videogame throws a wrench in the gears, so to speak, and employs a twist on what the player has come to expect from these noble protagonists. Instead of offering a traditional story with a triumphant, happy ending, sometimes the so-called hero will encounter unexpected twists along an overly tumultuous path.

Admittedly, nowadays these twists seem to happen more often than not. It takes a pretty shocking and unexpected moment to surprise most players that are by now used to most things going against the norm. Years ago, however, these twists were very few and far between.

One of the best examples of an older game that treats its protagonist in a very unexpected way is the Super Nintendo masterpiece, Chrono Trigger. Let’s experience a moment that single-handedly made gamers rethink what could actually happen to main characters in a videogame.

It goes without saying that Chrono Trigger is one of the greatest RPGs of all time. The quality of everything — from the graphics and music to the rich story and characters — is top-notch, offering one of the best adventures in gaming history. 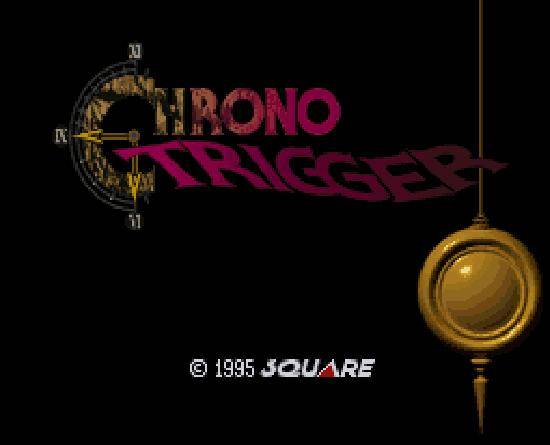 Unfortunately, because this game is so great, it comes with a very full and almost convoluted story. This is not a bad thing by any means; it just makes setting up one of the game’s greatest moments somewhat of a chore.

So, please forgive the following truncated version of events leading up to this week’s classic Memory Card moment.

In Chrono Trigger, you play as Crono, a silent protagonist and denizen of the small . During the local Millennial Fair, Crono and his best friend (an inventor) run into princess-in-disguise Marle. 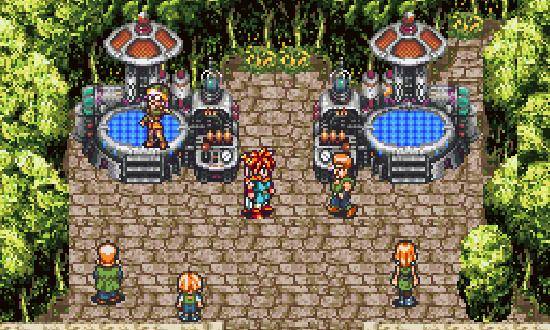 After a freak accident in one of ’s short-range teleporter devices, the three are thrust back in time, starting an epic, era-spanning adventure to save the universe.

You see, millions of years before Crono or any of his friends were born, an extraterrestrial creature named Lavos came to the planet, remaining dormant for thousands and thousands of years. 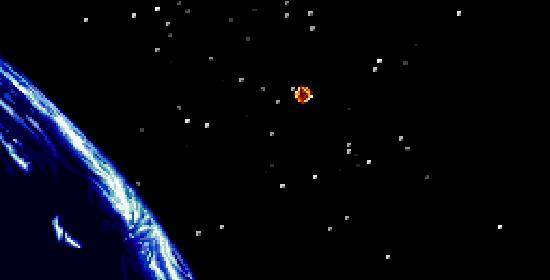 Through a multitude of (amazing!) events, Crono and his party eventually learn that Magus, the early villain of the game, is on a quest to awaken Lavos and destroy it, seeking revenge on the dark creature for banishing him to another time when he was just a boy.

Okay, are you still with me? Good.

Eventually, Crono discovers that a kingdom known as Zeal (in 12,000 B.C.) is trying to harness the power of the sleeping Lavos to take over the world. Wanting to protect the fate of the universe (as most heroes do), Crono and the gang (at this point accompanied by the robot Robo, brave knight Frog, and prehistoric Ayla) travel in their newly acquired time machine to Zeal to see if they can put a stop to the evildoers. 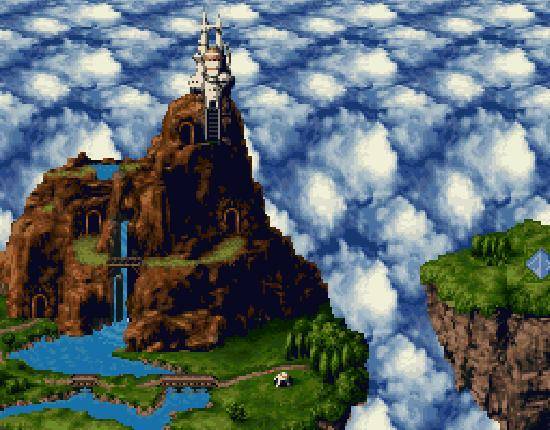 Upon reaching Zeal, Crono realizes that the heart of Zeal contains a massive contraption known as the Mammon Machine. It is this machine that is attempting to drain Lavos of its power. Of course, having seen the future, Crono knows that this machine is destined to cause more harm than good and is determined to destroy it.

After a tough battle through the Ocean Palace, Crono and his companions eventually reach the Mammon Machine, which is surrounded by Zeal’s evil queen, the helpless princess Schala (Magus’s younger sister), and numerous prophets.

In a rush to stop any further chaos, Crono takes out the sacred sword Masamune and thrust it into the top of the machine, hoping it will be destroyed in time. Unfortunately, the sword does almost no good and the beast Lavos awakens. Dag! 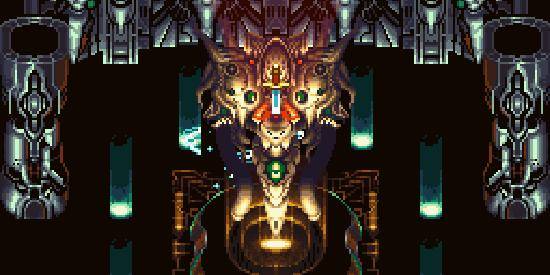 It is at this moment when the next Memory Card moment occurs: Crono’s final act.

Crono and his allies are thrust into battle with Lavos and quickly ready themselves to fight. Without exerting any effort, Lavos uses one of his weaker attacks and strikes down the entire party. Completely helpless, all hope seems lost, until Magus unexpectedly shows up (disguised as one of the prophets) and chooses to reveal his true, loyal nature.

Magus confronts Lavos and begins attacking him, all of this to the evil queen’s dismay. While this offers a mild distraction, Magus’s attacks do not even phase the massive creature, instead just enraging him more.

Suddenly, the evil queen of Zeal jumps on top of Lavos and summons his power to suck in everyone around her in an attempt to absorb their power. 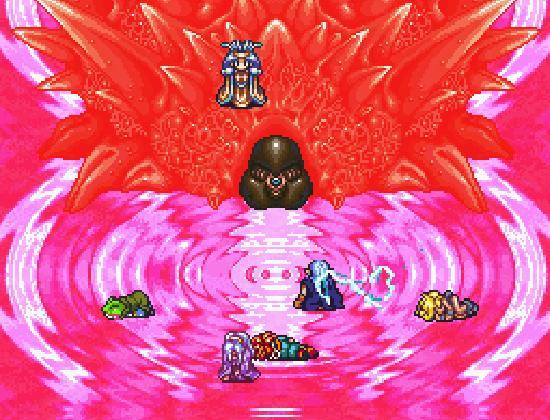 As his party is paralyzed and moves closer and closer to the horrible mouth of Lavos, Crono wakes up from unconsciousness and realizes what is going on around him.

Without even hesitating, Crono breaks free of his bonds and approaches the front of Lavos (an act you, the player, have to perform yourself). Using some unknown power, Crono sacrifices himself to the alien creature, saving his friends in the process. 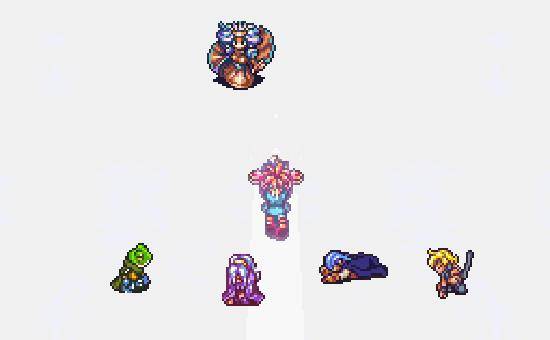 As Lavos focuses his attack on the game’s hero, the party is able to make its escape, watching helplessly as Crono’s body loses its soul and, literally, disintegrates in front of them.

After a blinding white light, the confused and devastated party finds itself back in front of the now destroyed Mammon Machine with no way of escaping the crumbling Ocean Palace.

Using the last of her power, the kind princess Schala, ashamed of what her kingdom caused, sends the remaining heroes away to safety.

Sadly, only the memories of their loyal friend Crono remain …

You can watch the dramatic and surprisingly tragic moment here:

Much of this admiration is owed to the lush back stories and remarkable dialogue of the characters, but even the main protagonist, Crono — who doesn’t utter a single word in the game — is completely endearing.

How many times have you seen a main character get “killed” in a game, only to have them brought back seconds later? It always happens. And I remember thinking when I saw Crono sacrifice himself in Chrono Trigger that he would be brought back a scene or two later.

But that never happened. Instead, I just took control of my other party members and continued the adventure. I will never forget how crazy that was: The title character in this epic RPG departed from my party permanently. Wow. It still amazes me to this day how many people lost it when Aeris (from Final Fantasy VII) unexpectedly died. I had already cried like a baby years earlier for my pal Crono!

Not to ruin the game even more for anyone that hasn’t played it, but, luckily, in another unexpected twist, Crono can actually be brought back to life later in the game by finding an item called the “Chrono Trigger” and using it in conjecture with a “Crono clone” (this moment itself warrants an entire future Memory Card — stay tuned).

What is amazing, though, is this is a completely optional quest. Having an epic RPG that can actually be completed without the main protagonist in the party is nothing short of revolutionary and is very rarely seen.

In fact, many of the final subplots of the game are all optional. Once Crono is dead, the whole game takes on a new feel. You actually get a sense that the characters in the game miss him. They become more morose and the game establishes a completely different mood. Instead of just going from one point to another (like you had up until Crono’s tragic fall), the player can decide what to do next. Almost every decision, every action, is chosen by the player, including whether to take up the arduous task of saving your lost friend. And keep in mind that all of these emotions are wrought from a deceptively simple 16-bit, sprite-based videogame. It’s pretty incredible.

Crono’s death was pretty revolutionary for the time and still holds up as being one of the greatest moments in RPG history. Yet another reason that Chrono Trigger will forever be remembered as a true masterpiece.