From hidden rooms to unlockable content, videogame secrets have been widely used over the years: most providing players with some extra satisfaction for finding something that not everyone is lucky enough to discover.

Although most of these secrets — like the Chris Houlihan room in The Legend of Zelda: A Link to the Past — are neat extras, they don’t usually add to the gameplay as a whole. Sometimes a hard to find health upgrade or secret costume will affect the way a game is played somewhat, but never enough to dramatically change things in the long run. “Wow, my character has on a tuxedo this time around … whoopee?” often runs through the heads of frustrated gamers looking for something with a little more, I don’t know, depth.

Once and a while, though, a videogame comes along that offers a secret that is more than just a shallow bonus and actually changes the way you look at how the entire game can be played. And since it is still technically a secret, some players can go through the game’s entirety not even knowing it ever existed.

Let’s find out about one of these extra special secrets in one of the best games ever created, Super Metroid for the Super Nintendo.

This is the second time Super Metroid has appeared in The Memory Card. The first time was the premiere edition and was concerning maybe my favorite videogame moment of all time: the return of Baby Metroid.

Because of its first appearance, I won’t repeat myself and explain any of the story points previously discussed in the earlier article. I will say this, though: Super Metroid is a fantastic game with some of the best gameplay ever experienced in the history of videogames. 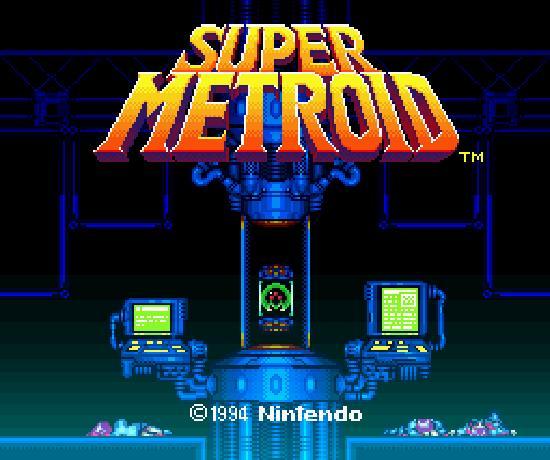 It being a Metroid game (the best one, in fact), you play as Samus as she explores an alien planet in hopes of solving its mysteries and defeating whatever creature or power has taken it over.

Of course, exploration is the heart of the game, and Super Metroid delivers in spades. There are multiple paths to explore and so many things to do as you travel around the unfamiliar world. 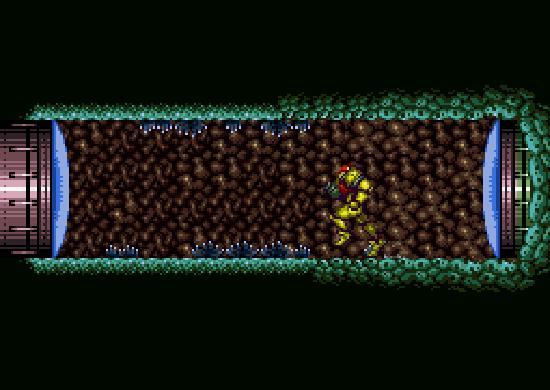 After many epic battles with numerous bosses, the game leads Samus into a submerged Space Pirate lab. Once in the water, Samus has trouble moving around (the control is significantly slowed) and she must find a special suit to make travel much easier. 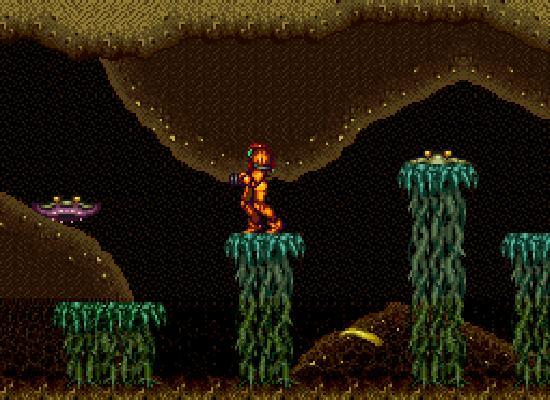 Upon finding the suit, Samus easily makes her way through the rest of the lab, one clever puzzle and challenging battle after the next.

At the very bottom of this underwater stage, Samus reaches a tall room filled with large power conduits and tangled cables. As she walks in, the hatch closes and locks, sealing her inside. It is in this room when the next Memory Card moment occurs.

As Samus stands in the center of the seemingly empty water-filled room, an odd group of green creatures slowly start to circle themselves as they randomly float every which way. To her surprise, the creatures cannot be harmed or even shot at all. Fortunately, they do no damage to Samus either, which is a huge relief as they are very hard to avoid. 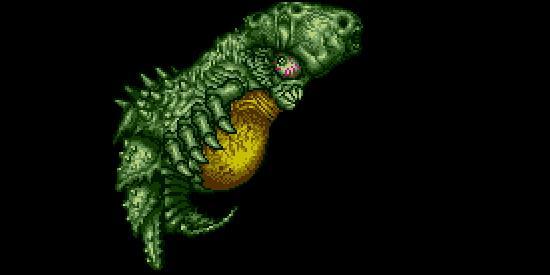 The boss’s name is Draygon and he kind of resembles a mixture between a shrimp and a turtle, with small, spider-like legs jetting from its huge, shell-covered body.

Like most bosses in the Metroid world, Samus immediately starts firing at it with a barrage of missiles and powered up shots from her arm cannon. Draygon is a tough opponent, though, as it swims in all directions in the water, making shooting at it very difficult.

Now, here is where something unexpected, completely secret, and just plain cool happens (if you, the player, can figure it out).

Samus can, of course, defeat the boss the old-fashioned way, by finishing it off with her supply of deadly weapons. But this massive creature comes with a weakness …

At random points in the battle (and when Samus gets too close), Draygon will swim down and grab Samus between its legs, draining her life energy. After grabbing her, he swims from left and right in a funnel-like pattern higher and higher up the room. 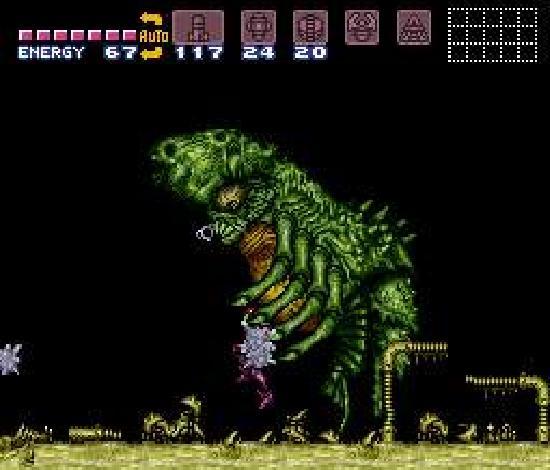 Unbeknownst to Draygon, this aggressive move meant to kill Samus actually opens it up to a deadly attack.

While in its clutches, Samus equips her simple grappling beam (up to this point not used in battle at all) and shoots it towards the open power conduits in the wall. Once the beam comes in contact with the charged surface, a huge bolt of electricity shoots into Samus, electrifying her and Draygon. 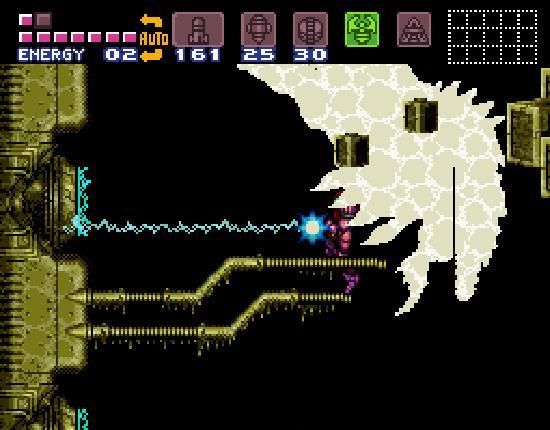 After only a few seconds, the boss is easily defeated, its grip loosening on Samus as its body sinks into the murky waters below. What could have been a huge, very challenging battle turns into an easy victory for Samus due to some quick thinking outside the box.

After Draygon disappears from view, the hatch on the far side of the room opens up, allowing Samus to continue her epic journey onward.

Honestly, I have no idea how I figured this out (I can’t remember if I read it beforehand or discovered it by accident), but I will never forget how cool killing Draygon with the grappling beam was the first time I did it.

Almost all bosses in videogames have to be defeated in the same way. Actually, let me be more specific: of course a multitude of different weapons can be used on a boss to try and defeat it. If you have a large variety of items in your arsenal, nothing is preventing you from using them all to attack, right?

But never before in a videogame has such a completely different method for killing a boss been an option. Technically, it is possible to defeat Draygon in the “normal” way and never experience this assassination via grappling beam at all. To me, that optional concept is just so cool.

And it’s not like the difference was that you could just use your non-aggressive grappling beam on Draygon as a regular weapon. Sure, that would have been surprising unto itself since the grappling beam had not been used as a weapon the entire game, but this was not how the alternative was presented.

Even if you pulled out your grappling beam and wailed away at the boss as you do with missiles or power beam shots, absolutely nothing would happen. The grappling beam does no damage to enemies the entire game in its normal state.

To have the enemy attack you and carry you away … and then to use its offensive stance against it by shocking it (and you) using part of the environment? Wow. I really can’t think of another videogame instance when something like this has been duplicated (the epic battle with The End in Metal Gear Solid 3 is the closest thing that comes to mind).

Sure, there are games like Zelda where multiple items can be used in multiple ways against multiple enemies and bosses, but even then, the boss is still killed in the same fashion, just using a different weapon.

The one sad thing about this moment: after it happened I was determined to believe that all the bosses in the game would have a secret way of killing them. Someone please correct me if I am wrong, but it is disappointing to fight the rest of the bosses using only boring, traditional techniques. Well, that is a little harsh. Even a “boring” boss battle in Super Metroid is more exciting and creative than almost every other fight in any game … ever.

Killing Draygon with the grappling beam is a completely unexpected surprise and something that I will never forget. Hopefully designers in the future will bring more robust secrets like this to the table. Not only are they just so cool to witness, they really add a much more realistic choice-driven feel to any game.