Remember the days of classic graphic adventure games on the PC, when companies such as Sierra and LucasArts pretty much ruled the roost? Some of the greatest games of all time, containing some of the most significant memories from my past, came out of this golden era of gaming.

The late ‘80s saw the biggest wave of success this genre had to offer. Multiple games, each special in its own right, were coming out every few months, filling the market with a wide selection of masterpieces in the making.

One of these masterpieces was King’s Quest III: To Heir is Human, the third game in the critically acclaimed and commercially successful King’s Quest series. Created by Roberta Williams, this series was a milestone in the genre of graphic adventures. Not only was it the first widely embraced series of its type, it also helped pave the way for many other classic series, each arguably better than the one previous.

King’s Quest III contains many great moments, but one in particular stands out above the rest: a bold story twist that, even to this day, remains one of the most memorable video game moments of all time.

In King’s Quest I: Quest for the Crown you play as Graham, a lowly knight for thekingdom ofDaventry, sent on a journey to retrieve the royal family’s three stolen magical items (a magic mirror, a shield, and a crest). After eventually completing this puzzle-filled task, Graham is rewarded the crown and becomes the new king and ruler of Daventry.

The next game in the series, King’s Quest II: Romancing the Throne, picks up right where the last game left off. Again you play as Graham, but this time you are the new king on a quest to find a damsel in distress (whom you see in your magic mirror at the beginning of the game; the same magic mirror retrieved in the first King’s Quest).

Once you rescue the helpless woman (named Valanice) from a faraway tower, the two of you are married and live happily ever after. 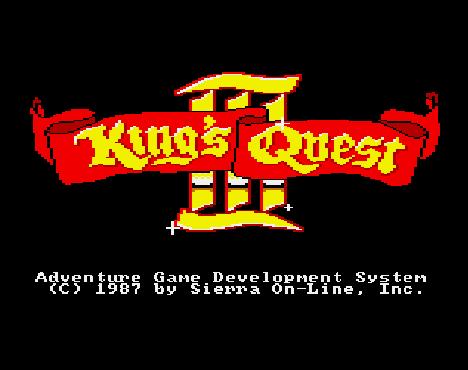 As King’s Quest III begins, instead of playing as Graham, you immediately are in control of a young man by the name of Gwydion. Not only is there no introduction explaining who this new character is, but you quickly find out that the game does not even take place in the familiar world of Daventry, instead taking place in the none-too-familiar land of Llewdor.

Gwydion, the player finds out right away, is the apprentice to an evil and malevolent wizard named Manannan. Actually, apprentice is the wrong word. In no way does Manannan plan on teaching you any of his magic. He just uses you as slave, having you perform such menial tasks as feeding the chickens and (*shudder*) cleaning his bedpan. 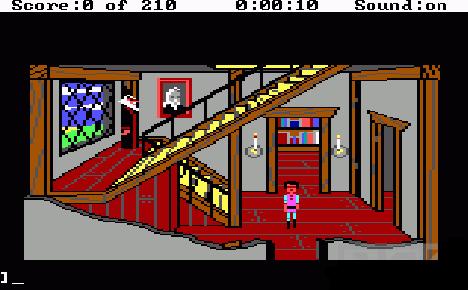 While Manannan is away, the game does something pretty neat and forces you to descend from your domestic prison into the village below and collect ingredients for a spell that will kill your horrible master (all within 20 real-time minutes or you are killed).

The spell you are quickly forced to (carefully) perform creates a cookie that will turn anyone who eats it into a cat — forever. 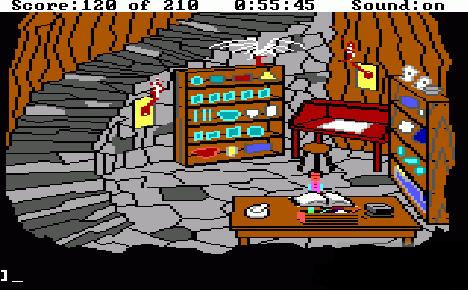 Once Manannan returns he is, of course, starving from his journey and asks Gwydion to prepare him a meal. Crumbling your magic cat cookie into some porridge stolen from the three bears’ house (obviously!), you feed Manannan the poison food and he immediately transforms into a helpless little feline.

Free of the wizard’s wrath, Gwydion descends into the village below, determined to travel as far away from Llewdor as possible. 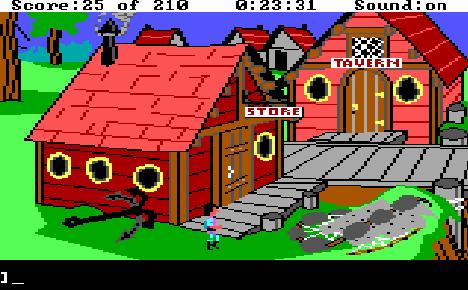 Before going very far, Gwydion ends up in front of an ancient oracle, who tells the young ex-slave that his sister, Princess Rosella, has been captured by a three-headed dragon and is being held prisoner in a land far across the sea. 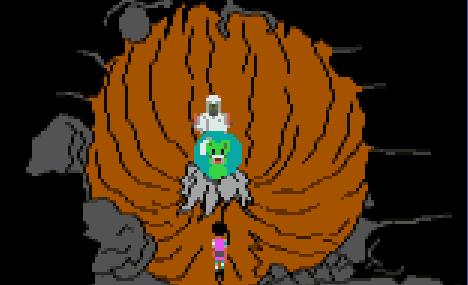 Surprised that his sister is a princess (making him a prince?!), Gwydion ends up securing passage on a ship and travels to a distant shore. After avoiding sharks, evil pirates, and the Abominable Snowman himself, Gwydion finally arrives at his destination.

This is where the Memory Card moment finally occurs – literally at the very end of your long journey – in a strangely familiar world to anyone who had played the first two King’s Quest games.

As Gwydion begins exploring his new surroundings, the player realizes that they are actually in a rundown version of Daventry (the location of the first game). A lot of the famous landmarks are even visible and instantly recognizable (the well, several caves, etc.), but are now half destroyed or in total ruin.

Along the way, Gwydion runs into a gnome (the same character from King’s Quest I, although much older) who tells him he is actually Prince Alexander, son of King Graham and Queen Valanice, and the heir of Daventry.

Gwydion, taken aback by all of this news, asks if his family is still living. Upon hearing they are alive and well, Gwydion immediately sets off to slay the three-headed dragon, free his sister, and return to his long lost family.

After climbing what seems like an endless set of stairs into the sky, Alexander (formerly known as Gwydion) reaches the dragon, slays him using a spell learned at the beginning of the game, and rescues his helpless (and unfortunately quite annoying) sister Rosella. 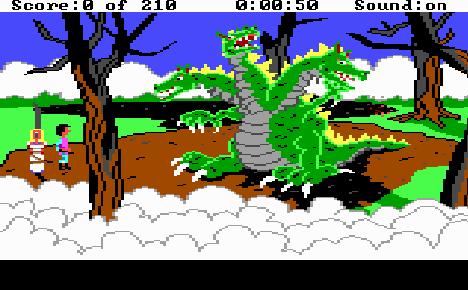 Traveling together, the two of them return back to the castle and are reunited with their parents, the king and queen of the kingdom. Apparently kidnapped by Manannan at birth, Graham and Valanice had searched for years for Alexander, but had finally given up, assuming he must have been dead.

King Graham, almost an old man now, decides to pass on his famous adventurer’s cap to one of his children. Throwing it in the air, Graham exclaims that whoever catches the family heirloom will be the son or daughter that continues on the family adventures. 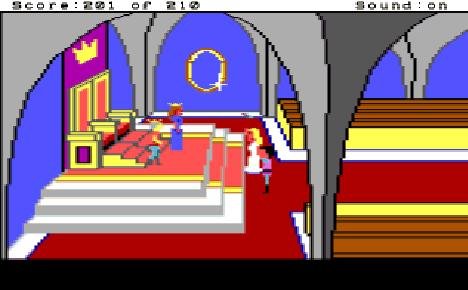 As the hat circles in the air the game ends, perfectly setting up the next game in the series (there were seven in total, with an unrelated eighth game made years later – and, for the record, Rosella ends up retrieving the hat and ends up starring in King’s Quest IV: The Perils of Rosella).

You can watch the final sequence and dramatic ending here (if you are familiar with the first two games, notice how ‘older-looking’ sprites are used for Graham and Daventry, making you feel like you really are traveling through the same world from the first game, only years later – pretty impressive for the time):

While it didn’t leave a huge impression at the time, this moment of finding out you were actually the son of the previous games’ main character Graham and heir to the throne of Daventry has lasting significance.

Maybe most importantly, this creative story decision actually hurt initial sales of the game. While the payoff is extremely rewarding, having a game not reveal any connection to previous ones in the series until the very last sequence was a huge risk (that, thankfully, did payoff for Sierra in the long run).

In fact, many fans of the series were extremely disappointed when they started playing the game and were introduced to a brand new character in a brand new world. Everyone just assumed the game was a random side story that had nothing to do with the original mythology. While gamers nowadays would most likely react with less melodrama, King’s Quest III was released in 1987 and, at the time, something like this, especially in a video game, was unheard of.

Even the box art and marketing for this game had no reference at all to King Graham or Daventry. The cover of the box showed Manannan (in pure evil mode) staring into a crystal ball containing new character Gwydion. And that was it. No tagline that read “The story of Daventry continues …” or anything. Players were left more than confused, some even ignoring the game entirely. 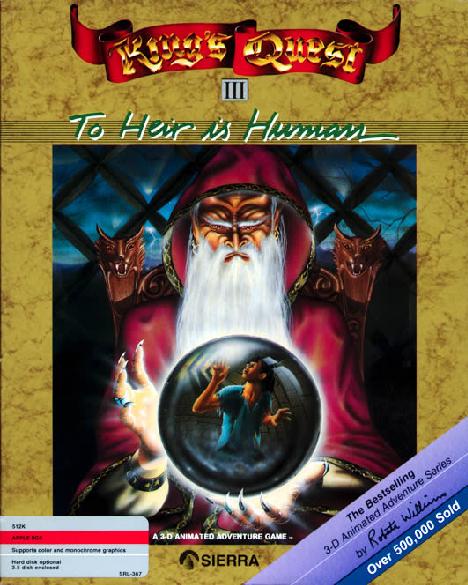 The first two King’s Quest games were very successful for the time. To put it into perspective, it would be like a new Zelda game coming out now (with the comforting Legend of Zelda moniker) that didn’t have Link as the main playable character. Fanboys would be enraged; probably even rioting in the streets (I mean, look at the surprising reaction to Wind Waker’s cell-shaded graphics).

But why has a successful and very creative idea like this not been duplicated in any other games to this day? Kingdom Hearts II tried to attempt something similar by having you play the first five or six hours as a random guy named Roxas, but this wasn’t very effective since the box art and marketing was plastered with images of Sora, Donald, and Goofy. Although it may have been shocking and confusing at first, gamers knew that Sora would eventually be connected to Roxas and that everything would end up back in familiar territory. Had Square-Enix taken a chance and offered audiences no reason to believe Roxas had any connection to the first game in the series the game would definitely have turned out much more memorable.

I would love to see this technique used again (even on some of the more popular modern series) and really challenge designers to take the risk. It worked back then with memorable results, why couldn’t it work now? Try having a Metroid game star somehow other than Samus. Why not surprise everyone with a God of War sequel sans Kratos? “Why fix what isn’t broken?” is a valid reason for not changing, but publishers need to be inspired by a game like King’s Quest III and really take risks with story and gameplay. Gamers and games alike would definitely benefit from these creative tangents.

The shocking moment of discovering who Gwydion really is makes me miss and truly long for the good ol’ days of classic PC adventure games. Using the simplest of sprites and even more basic animation, some of the richest and most long-lasting stories were told that will be remembered for years to come.

The deep family saga of Graham, Valanice, Alexander, and Rosella continued through seven amazing games, but it was the ending moment of King’s Quest III that really showed how the classic series could go from being a basic set of video games to becoming an actual work of art.