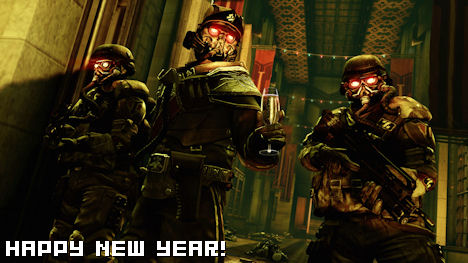 With Christmas over, it’s now time to sit back and reflect upon the kind of year that 2008 was, while looking ahead to a whole new one. A whole new one that will probably play out exactly the same as this year.

One tradition of the New Year is the famous resolution, where naïve people set themselves a list of achievements and improvements that won’t be adhered to over the coming year. Since the game industry could do with a lot of improvement, we have taken the liberty of drawing up its own list of resolutions, which publishers and executives are welcome to print out, sign, and pin to their office walls.

Read on for our game industry New Year resolutions.

3: I will stop using the Unreal Engine if I have no idea how to make my games look good with it.

4: I will stop making the hero of every RPG a 16-year-old boy in a conflicted love triangle who learns the truth about himself and the nature of friendship as he quests to save the world from an ambiguously camp male fashion model.

5: I will stop bitching if I get a review score of less than 9.0 or higher. I will recognize that a score of 8.0 is actually really good and that since reviews never greatly impact sales, I should stop contributing to one of the reasons why people don’t feel they can trust them anymore.

6: I will stop putting out inferior Guitar Hero/Rock Band rip-offs with cheaply made plastic instruments that have no hope of going anywhere. I will wake up and realize that I am contributing to the saturation of the market and sending us ever closer to another videogame market crash.

7: I promise to never send another press release that’s formatted all wrong with massive text all over the place. Not only is it really hard to read, it’s also a total pain in the ass for the poor blogger who has to reformat my crappy PR into something the readers will actually be able to look at without vomiting.

8: I’ll stop sending those annoying .mov movies too while I’m at it. Nobody cares how trendy I am.

9: I will realize that I sound like a self-parody if I say my game is “dark and gritty.” I promise that if I ever say those words again, I will use them ironically, since that’s the only context that doesn’t make me look like a prick.

10: I will be confident when promoting my game, but I will not be arrogant. I will not make wild claims about the capabilities of my game, I will not insinuate that people “don’t get” it if they hate it, and I most certainly will not enter into bets with online message boards over the game’s success.

11: I will stop making lazy DLC with which to milk customers dry. I shall resist the temptation to charge five bucks for a pretend T-shirt.

12: I will recognize that there are more colors than brown.

13: I will stop stretching franchise plots out to three installments or more when the actual narrative is slim enough to fit into a single game.

14: I will stop assuming that including motion always results in a superior control scheme over traditional, button-oriented controls.

15: I will remain happy with the market demographic I already have and won’t greedily switch my console’s gears halfway through a generation because I want what other people have.

16: I promise that in 2009 I won’t spend all my R&D on a meaningless pet project that fails to appeal to anybody when I could have been making videogames the whole time.

17: I will not release a “limited collector’s special edition” for a videogame that nobody knows anything about yet. I will save it for when I have a franchise that actually deserves such extravagance.

18: I will be honest and admit that the character A.I. is about as revolutionary and advanced as in every other game — not very much.

19: I will stop using High Definition as an excuse to use poorly designed, incredibly tiny text that doesn’t even look good on a 50″ LCD screen, let alone the millions of SDTVs that are still being used by gamers worldwide.

20: I promise to stop whining about used games as if trade-ins only affect the videogames industry and aren’t another cog in the very same capitalist machine that lets me get away with half of the shit I get away with.

21: I will admit that “intuitive control” is not a special gameplay feature and is just a fancy term for a control scheme I’ve ripped off of another, probably better, game.

22: I promise to stop requiring QTE button mashing just to open a door. I recognize that it adds nothing to the gameplay and is just mindless busywork to make players think they’re not bored.

23: I will make more well-balanced games that are neither pathetically easy to attract so-called “causals” nor mindlessly hard just for the sake of being hard. I will actually employ some designing skill to create a game that is challenging but fair.

24: I pledge to stop relying on patches to complete my rushed videogame.

25: I will stop patronizing the “casual” demographic as if they’re all completely stupid. It might well be true, but LIPS commercials are still incredibly annoying.

I will make a PSP game. Maybe.