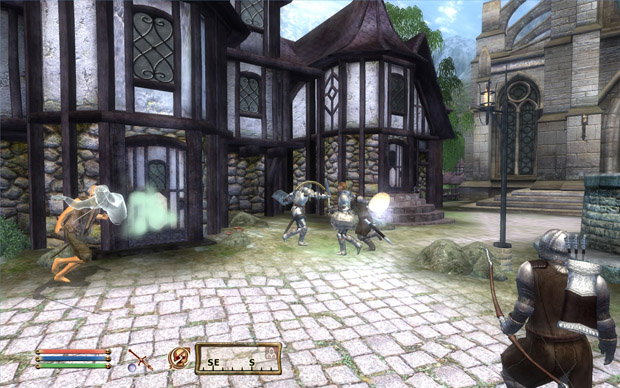 The first novel, titled The Infernal City, will be published in Fall of 2009. It is set after the most recent Elder Scrolls game, Oblivion, where the people of Tamriel are again facing an uncertain future:

Floating high above the land is a strange and mysterious city that is casting a horrifying shadow – wherever it falls, people die and rise again as undead. It is up to an unlikely duo – a seventeen-year-old girl named Annaig and the Emperor’s young son, Prince Attrebus – to rescue the kingdom from doom. Annaig and Attrebus’ quest will take them through the Elder Scrolls universe and their adventure is sure to add to the series’ already magnificent mythology.

“We’ve been big fans of Greg’s work for a long time, and we’re thrilled he agreed to bring his talents to The Elder Scrolls,” said Pete Hines, vice president of public relations and marketing for Bethesda Softworks. “We see these books as a natural extension of the franchise and think fans will love the stories and characters Greg has created.”

I’m already sold. Who else looks to get their read on?

Born in Meridian, MS, in 1963, Greg Keyes spent his early years roaming the forests of his native state and the red rock cliffs of the Navajo Indian reservation in Arizona. He earned his B.A. in anthropology from Mississippi State University and a master’s degree from the University of Georgia, where he did course work for a Ph.D. He lives in Savannah, GA, where, in addition to full-time writing, he practices ethnic cooking–particularly Central American, Szechuan, Malaysian, and Turkish cuisines–and Kapucha Toli, a Choctaw game involving heavy sticks and no rules. While researching “The Age of Unreason,” he took up fencing, and now competes nationally. Greg is the author of THE WATERBORN, THE BLACKGOD, the Babylon 5 Psi Corps trilogy, the Age of Unreason tetrology (for which he won the prestigious “Le Grand Prix de l’Imaginaire” award), and three New York Times bestselling Star Wars novels in the New Jedi Order series.