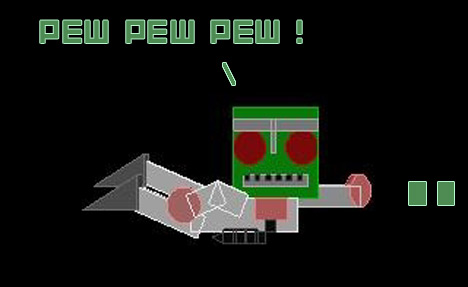 See that Mr. Destructoid graphic up there? I made that in about five minutes with the ship creation tool in Blast Works‘ level editor. Then I uploaded it to the Blast Works Depot, where a grand total of two people have downloaded it so far. I know…pretty impressive, right?

Think you could do better? Want to win some fabulous prizes? The road to true fortune and glory may be staring you in the face right this very moment.

Hit the jump for details.

This is a competition to create the best Destructoid-themed Blast Works level on the face of the Internet.

How will this contest be judged? Longtime readers of Destructoid should be very familiar with such Destructoid-isms as “Also, cocks,” as well as Destructoid personalities such as Ashly and the now world-famous Spacecat. Including references to these uniquely Destructoid phenomena in your levels will definitely win you some points.

Don’t get the wrong idea, though. This isn’t just an in-joke or catchphrase competition. Destructoid isn’t just about self-referential humor. Destructoid is about unadulterated love of all things videogame. Showing that kind of love in your Blast Works level by including graphics based on your favorite game characters, consoles, or even game designers, is the real way to win this contest.

Most of all, make your level fun for you to play. There is no better way to show your love of videogames than to make a videogame level yourself that shows how fun they can be. Do that, and you’ll be sure to do well here.

Also important to winning is not getting disqualified. Levels that take longer than five minutes to reach the boss, or are so difficult that the judges cannot reach the boss after 10 attempts on pilot difficulty, and submissions that contain images that might make someone want to cry and/or punch the level’s designer (overtly pornographic, racist, or otherwise offensive material) will be thrown out. Basically, keep it “safe for work” and you’ll be OK.

Sadly, you must have a US Wii console and access to a Wi-Fi connection to enter this contest. Not because we like to be jerks, but because all of the entries for this contest, as well as many of the prizes, will be sent directly from the entrants’ consoles to the Blast Works Depot. Sorry, Europe and the rest of the planet, maybe next year.

To submit your entry, just drop a link to your entry’s page on the Blast Works Depot in the comments section of this post. Every Friday for the next five weeks, I’ll select two levels to be declared “Destructoid Blast Works levels of the Week.” These levels will then be pushed to the semi-finals. From there, Grant Poock and Marcus Brown of Budcat Creations (developers of Blast Works) will judge from the semi-finalists to crown the first, second, and third place winners.

That’s right, all semi-finalists in this contest will have their levels played by two of the creators of Blast Works. Who knows, if they like your style enough, maybe you’ll even score a job out of the whole thing. Think of this contest as the American Idol of shmup designing.

* A WiiWare or Virtual Console game of your choice

* A not-so-special in-game Blast Works/Destructoid trophy designed by yours truly that will include a “crude, amateurish ability to manipulate polygons and a clearly un-evolved sense of humor” (to be sent directly from Jonathan Holmes to the recipient via Wii-mail)

* A hand-drawn third place trophy made by me and Spacecat

Now get out there and make the best shmup you can. We’ll be waiting.