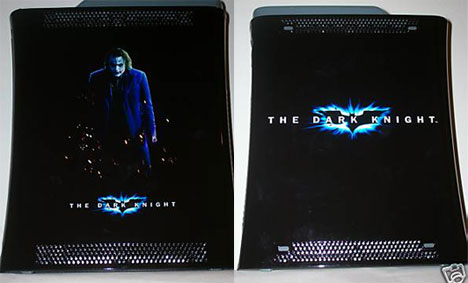 I loved The Dark Knight just like the majority, and while I hate to have to say I followed the herd on anything, it’s just a damn good film. Not being a lifelong Batman fan, however, I don’t personally want to customize my 360 to reflect the theme you see above, but I can easily see why someone else might want to, as it’s a killer presentation.

Speaking of killer, the price may do just that to you — it’ll cost you $1200 to score this beauty for your own living room. It’s currently listed on eBay at that price as a Buy It Now item, although you can also attempt to make an offer to the seller if you don’t quite have that much green to spare. The custom console was a prize in the Domino’s Pizza giveaway “The Cards Tell The Tale,” and only 110 of them were produced. It comes with all the goods except HDMI cables, which the seller specifies are not included.

Personally, I love my 360, but I’ll stick with faceplates, as they are more in my price range. Anyone considering putting in a bid for this?