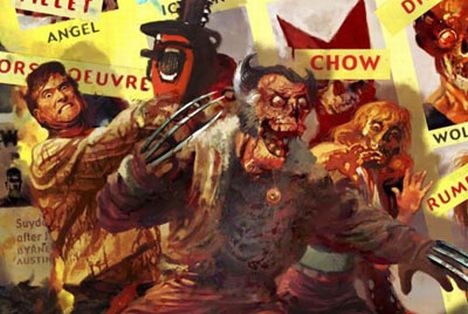 I am a gigantic fan when it comes to the Marvel Zombie universe. I know it’s just Rumortoid for now, but I really hope a game based on this series is true. Could you just imagine all the gore and carnage the game will have? Can’t wait to pick up the sequel next week!

Lots of stuff happened today! Nick debuts Scraps, we review Metal Gear Solid 4, tons of Xbox 360 news were leaked, and much more happened today in the world of gaming.

News:
Ride a horse with your balance board: G1 Jockey makes it so
Fire Emblem DS takes your battles online
PS2 version of Rock Band bundle only $99.99 for a limited time only (Update)
Sam’s Club Solid Snake statue to be auctioned
Wii Fit and women leave wake of destruction
GTA IV turns you into a pedophile
Koji Igarashi speaks on Castlevania; comments ‘2D is still alive’
The Conduit devs hope to include voice chat in Wii game, also want a pony
PSP firmware 4.0 adding Google Search to XMB
Microsoft wants to release first in the next console generation, too
Paradox Interactive announces release date for Penumbra expansion
EA brings fantasy football to a videogame console near you

Galleries:
Women and volleyball come to life in Women’s Volleyball Championship for the PS2
Freaky new SIREN: Blood Curse screenshots
PixelJunk Eden demo coming next month so you can figure out WTF is going on

Trailers:
Do not resist these Resistance 2 gameplay videos