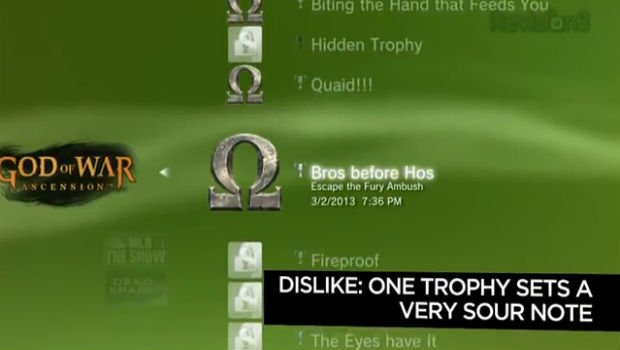 Warning — do not watch the above video without subjecting yourself to minor spoilers for God of War: Ascension.

As you may have heard, Adam Sessler recently played through God of War: Ascension, and was disgusted by a particular trophy, titled “Bros before Hos.”

Around 6:50 into his review, Sessler describes the experience as “one of the most violent things I’ve ever seen in a video game,” a scene where Kratos stomps a female enemy creature’s face in and earns a trophy. He calls the event and trophy description a “gut-punch of misogyny,” that sours the entire experience for him.

I can see the issue here right off the bat, but that’s not the entire story. As you can see in the above video, not only does that character not die as a result of this confrontation, but the trophy’s accomplishment might actually be based around another character that hands you an item, who stands up to that female creature.

Since Sony usually hands out trophies after major confrontations, there’s no telling whether or not the trophy is specifically awarded for beating up the female character, or simply because of your male comrade’s decision to defy her.

In any case, do you feel like Sony Santa Monica overstepped their boundaries, and should rename the trophy?