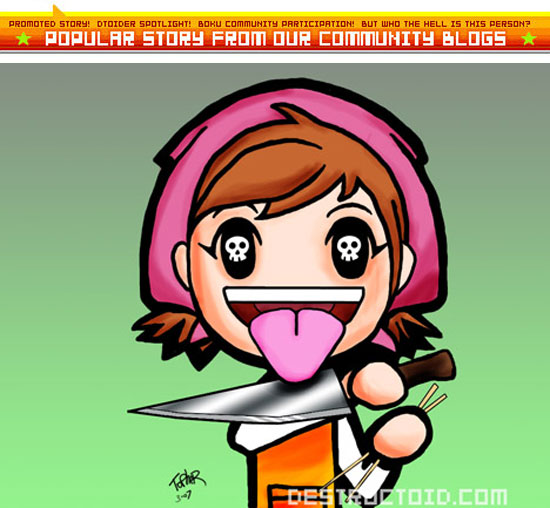 [Keeping up with the whole casual game debate, we found this interesting little op/ed in the community blogs that we wanted to share with you. Also, I just loved Toph’s image of Mama, that I use it for anything casual games related. – DMV]

So, thanks to a large degree to the Nintendo Wii, casual gaming seems to be on the rise. More and more parents, grandparents, non-gamers, babies, and puppies are starting to pick up on this whole “gaming” thing. And this is a good thing, isn’t it?

It seems like we’ve tried, for years, to legitimize this thing we do called “gaming.” We’ve tried to tell people, “No, we’re not geeks.” We’ve tried to convince them that gaming is a perfectly valid way of passing the time, certainly no worse than watching TV (and given some of what’s available on cable these days, you’d likely have a strong case for gaming being a better passtime). And thanks to the growth in the casual games market, and the growth in the casual players market, we may be finally marching towards a victory in legitimizing video games.

So, of course, gamers are complaining about it.

The general argument seems to be: Why in heaven’s name would you want to put good money into something like WarioWare or Cooking Mama or Brain Age when you could be dumping that cash into the development of the next uber-violent gaming franchise. WHAT IS WRONG WITH YOU!?

Yes, it’s unfortunate that the release of DOOM 9 or Unreal Tournament 2007 Part IV might end up a little delayed thanks to developers expanding the sorts of games that they’re developing. But the reason they’re making that expansion is because the number of people playing video games is expanding — and that can only be a good thing for the industry.

And believe it or not, having variety and having choice can only be a good thing for the industry as well.

There are probably somewhere between 6 and 10 different game genres that make up 90% of the games that we play. And while most of those are fun, you’ve got to admit, they’re getting a little stale too. I mean, shooters are great and all, but let’s try something a little different with that guy. I was shooting virtual baddies with a virtual gun back in the mid-90s. It’s been a decade. C’mon, people.

Appealing to this new breed of gamer is going to require some degree of innovation, and it appears that Nintendo “gets it” far more than anyone else. They got it with the Wii, even when most gamers giggled at the name. They seem to be getting yet again with their wacky balance-pad. They’re trying new things, and it’s working. It’s bringing in new people, new people mean more sales, more sales mean more revenue, more revenue means a wider variety of titles. Which is only going to benefit us all.

Everyone, hug a casual gamer today. Even if they can’t play Gears of War and wouldn’t know a RTS if it shot them in the face, they’re just like you. They’re a gamer. Give ’em some love.