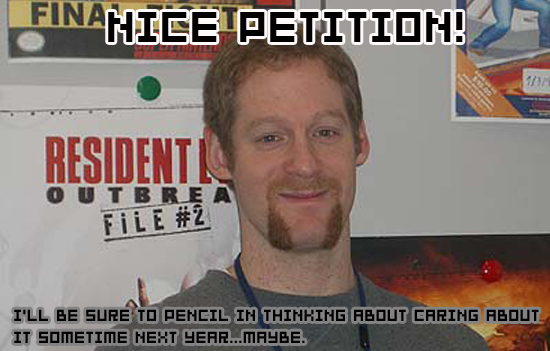 Online video game petitions are known for one thing; being ignored by game developers. This due to many factors, not the least of which is that these petitions are often written in English, but are directed at Japanese developers. That luckily isn’t an issue for the currently open petition by GoNintendo editor RawMeatCowboy asking Capcom to bring it’s long dormant Bionic Commando franchise to the Wii.

Hit the jump to read what Ben Judd, the producer of the 360 and PS3 bound games Bionic Commando and Bionic Commando Rearmed (and the voice of the American Phoenix Wright) has to say about the petition, with some bonus sales data on Capcom Wii games thrown in just for the thrill of it.

Speaking of thrills, don’t forget to check out the Bionic Commando Wii Petition contest. Entering is a good idea because it’s fun and potentially profitable, while simultaniously a bad idea as it will support the creation of a potentially terrible thing, that being a horrid Bionic Commando port to the Wii.

See what I did there?

In a recent podcast battle between the assistant producer of Metal Gear Solid 4 Ryan Payton and the already mentioned Mr Judd, Ben had this to say about the Wii petiton-

“Yes, we have taken notice. We’re very happy about that. Any time there’s an opportunity for new possible business – especially since we’re a company that likes our multi-platform strategy – that’s great. All I can say right now is that we’re certainly thinking about it. If there is going to be a Wii version that comes out, rest assured it’s not going to be something that’s announced tomorrow or in a week. I mean, even if we were to start planning it, let’s say, tomorrow, you wouldn’t see anything for a year, or whatever. So, if you do have your hopes pinned on that, I would say ‘Keep pinging us about that point,’ and expect something like that, if we decided to go down that path, in about a year or more. So please be patient.”

There is no reason for Capcom to be thinking like this. According to our buddies at NintendoWiiFanboy, Resident Evil: Umbrella Chronicles sold nearly 1,000,000 copies since it’s world wide release late last year. That’s not blockbuster money, but then again, Umbrella Chronicles was not a blockbuster game. Same goes for Zack and Wiki, which has reportedly sold a little over 300,000 copies world wide since it’s release in ’07. Capcom has stated they are more than happy with those numbers, presumably because the game was not all that expensive to produce.

Both games rely more on visceral game play mechanics than graphics, and are designed for the hardcore friendly gamer who isn’t necessarily looking for every game they buy to be a life changing experience. That’s exactly what I want the next Bionic Commando to be.

I don’t want Bionic Commando to ever try to compete with Halo and Gears of War. Those games are huge blockbusters, and frankly, the Bionic Commando concept is just a little too goofy to attempt something on that kind of scope. Bionic Commando is a game about a guy with one robotic arm sent to rescue another guy named Super Joe from purple nazi’s led by the muscular re-animated corpse of Hitler.  That’s the kind of game that would work much better if treated with the same sense of scope, focus on fun, and permission for ridiculousness that we get from Wii games like No More Heroes and the above mentioned Capcom Wii exclusives.

What I’m saying is, I think that Ben Judd would make a better Bionic Commando game if he thought of the series as deserving the Wii treatment first and the PS3/360 treatment second. If the PS3/360 versions are over-budgeted financial bombs, and the subsequent Wii port(s) mere cash-milking after thoughts, then everybody loses. If instead the water is tested with a lower budget Wii version of Bionic Commando which gets new fans hooked on the series (pun intended), and then the more pricey but prettier PS3/360 versions come out, Wii owners may actually buy a 360 or PS3 just to follow their new favorite series onto more powerful hardware.

I know that if a No More Heroes game comes to the PS3 now, I’d be much more likely to plunk down $400 and commit to the big black box just because I’ve fallen in love with that game and want to continue my enjoyment of it, regardless of what console it’s on. If on the other hand No More Heroes had come to the PS3 initially, then I might have ignored the series entirely. The first way I buy two No More Heroes related games. The second way, I buy none.

The Wii continues to lead the current-gen console war with it’s continued capture of the largest world wide install base. A game developer looking to re-start a franchise wants to start with that  install base then try and work the rest of the crowd, not start with the smaller crowd and hope it some how gets bigger. That’s just Business and Finance 101.

Or maybe I’m totally off base here. What do you guys think?