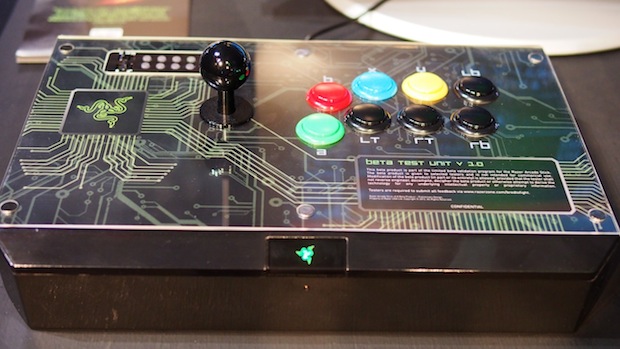 Razer is working to get their upcoming Xbox 360 Arcade Stick absolutely perfect. The units they have on display at Tokyo Game Show this year are from their beta program, and are the 13th iteration of the sticks. 200 fighters and modders have given their input and feedback in this program, helping Razer add features like the changeable top panel and storage for cables or components to the unit.

I gave one a spin with a few rounds of Virtua Fighter 5. This thing is a beast, sporting a wide base, some serious weight and a nice, large gripping pad on its bottom. This stick shows some serious build quality. On the inside, I saw that all the components are accessible and easily switchable. There’s also lots of room for storage of extra parts and the tools to change them with.

In use, the joystick did not miss a single beat, and the Sanwa buttons felt great when I pulled off my canned combos. I liked slapping the large start button on the stick’s right edge to advance through screens and taunts. Even at its current unfinished state, I would love to take one of these units home.

Razer is rounding the corner, headed toward a finished product. We’ll have to wait until that happens for details on availability and pricing.