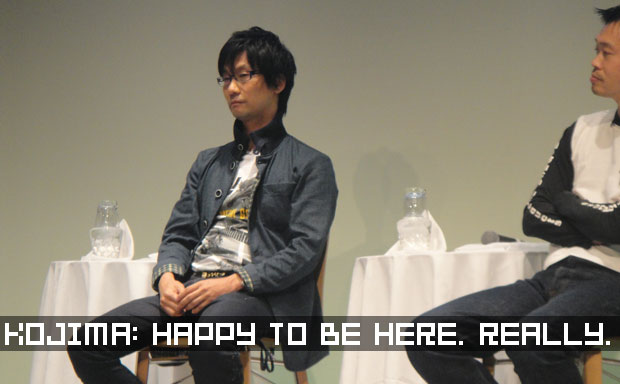 While the moderator, Xbox Japan’s general manager Takashi Sensui, tried to steer the conversation towards gaming, Kojima was thinking outside the box. Solid Snake’s daddy went out of his way more than once to say that he saw applications for the technology beyond gaming. While he said in broad terms he’d like to use it for games, he mentioned how it could change our “lifestyle dramatically.”

“I think we have to go beyond entertainment,” Kojima said through a translator.

One use he said could be security, like placing a camera in an elevator to watch for suspicious movements or activities. He also noted that he envisions medical applications for Natal, like a camera picking up when someone was suffering from an illness, or even for use in surgeries.

Surgery? Really? Anyone remember when Kudo Tsunoda tried to show us the bottom of his Avatars shoe at E3? I’m not so sure about putting my life in the hands of that technology. But Kojima does make a valid point — if Microsoft’s Natal technology can do half of what they say it does, perhaps simply thinking about games is a bit narrow-minded.