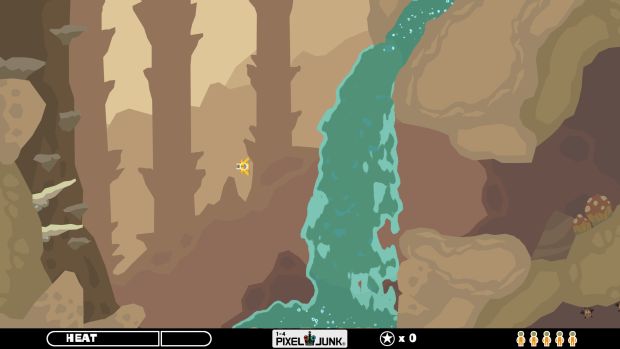 When I get excited about a game, I tend to get pretty worked up, wave my hands about a lot and prattle endlessly. Case in point: when I got to the Q-Games booth today, I preceded to tell the English-speaking PR rep that I was so deeply obsessed with PixelJunk Monsters that I had developed a kind of fixation on all things Q-Games related. Lucky for me, he smiled and laughed instead of inching away in the other direction.

Anyway, the newest game in the PixelJunk franchise, Shooter, was on display at the booth and I got a chance to give it a whirl. Hit the jump to hear my thoughts on the upcoming PSN title.

One thing about Shooter that could possibly turn gamers off is that it features a lot of soft, earth toned colors, which gave me the original reaction that I might not be interested in it. Were it not for my fixation on all things Q-Games, I might not have even been drawn towards it. This is not to say it looks bad at all, because it doesn’t — like all other PixelJunk titles, the graphics are crisp and good looking.

As soon as I started to play, I realized those same color choices I found muted to begin with were a perfect fit for the gameplay. As you may already know, you control a small ship which is assigned with the task of rescuing people who are trapped beneath the earth’s surface in caverns. You also are equipped with a rocket, which you’ll need to blast away the floating enemies that try to get in the way of your mission.

I only got to play through one level, but what I did play instantly addicted me and made me want more. The soothing, almost dreamlike atmosphere of the game as the same vibe as all the PixelJunk games, and it looks like the caves will become increasingly more complex to navigate as you progress.

PixelJunk Shooter will be released this December exclusively on PSN, and I’d say it’s well worth checking out, especially if you’re a fan of the previous titles. Can’t wait!