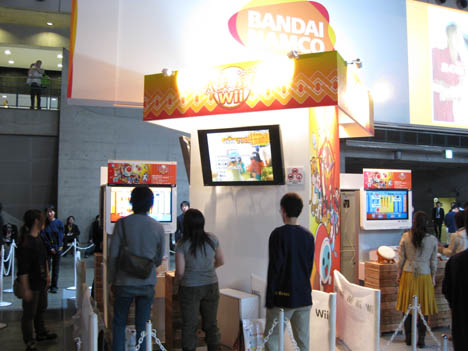 I’m a Taiko Drum Master/Taiko no Tatsujin fantatic, so I just had to get my hands on the latest version, coming soon to the Nintendo Wii in Japan. As for the US release, I’m not sure. We saw the PS2 release awhile back, but it didn’t sell that well. I don’t care about all of that, though; I just wanted to play it.

I was a bit surprised to find out that the Wii version of Taiko does not use a couple of Wii Remotes in place of drum sticks. I imagined something like beating a massive invisible taiko drum in the air in front of you. In my mind this would be totally possible, and cued vibration could even give that tactile drum strike sensation, but they opted for a rig very similar to the PlayStation 2 version. They call it the TaTaCon. In other words, you get a regular drum and plastic drum sticks. The drum connects to the Wii Remote, making it sort of wireless.

The news here is that the drum is smaller and more responsive than the PS2 version. Your sticks have a really nice bounce off the drum head, and you don’t have to hit it very hard for your strikes to register. This definitely made the game more fun to play.

It’s Taiko Drum Master, so the game plays exactly as you’d expect, and not much looks different other than your Mii face by your score. Personally, I’d rather see the cute taiko face instead, but you know how that goes.

I had the chance to play two traditional Japanese songs I was not familiar with but, of course, I rocked each one. One of the Bandai Namco reps did a duet with me on a second drum on a faster song, and she demolished me. She was awfully smug about it, too.

Taiko no Tatsujin Wii will release in early December in Japan. It will sell for 7,980 yen (about $75), and extra TaTaCon will be available for 3,990 yen. If you have a Japanese Wii and are a Taiko fan, I’d say that this is definitely worth importing.