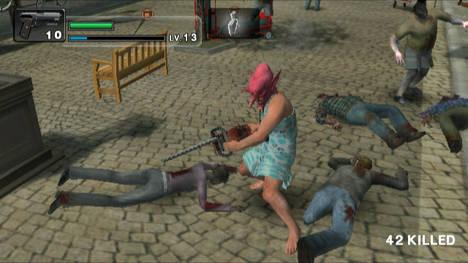 First, the bad news: Dead Rising: Chop Till You Drop has been delayed until February 2009 in Japan with US and PAL releases to follow shortly after.

Now on to the good news: Here’s a brand new trailer for Dead Rising: Chop Till You Drop! Well, good news if you’re not saddened by the fact that there are about a dozen zombies on screen at once.

Nick Chester just played Dead Rising for the Wii last week and wasn’t too impressed with the game. The TGS gang will be playing Dead Rising Wii again this week and hopefully we’ll get to see an updated build of the game this time.

Hit the jump for the new trailer and check out the gallery below for some Mega Man–Frank West action. Anyone looking forward to the game?