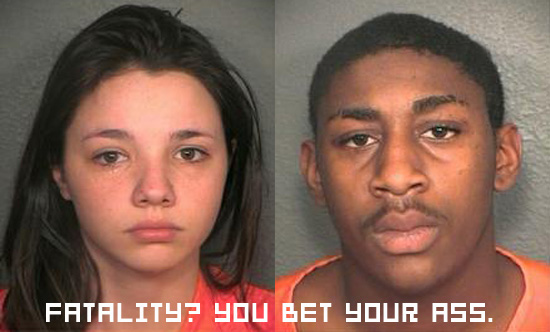 Oh dear. When the game haters of the world hear about this one, there’s going to be a field day to rival the Romans reveling over bloody crucifixions. Apparently on December 6th, 7 year old Zoe Garcia was being watched by her older sister Heather Trujillo, 16 and her boyfriend Lamar Roberts, 17. After some drinking, the two teens decided to act out the game Mortal Kombat and decided to get Zoe in on the action.

According to Heather, they were hitting and kicking Zoe while acting out the game and even dropped her on her side, breaking her wrist in the process. Roberts, who claimed to be a martial arts expert, says that Zoe asked him to stop hitting her but due to his state of intoxication he did not comply. He performed a back kick on the child, which she did not get up from. The teens tried to revive her several times and did not succeed. The cause of death was later named as “blunt force trauma” to her brain and central nervous system.

Digging into the family background is equally as upsetting as the incident itself, with many reports of previous abuse within the household. Zoe actually admitted to another babysitter that Lamar had hit her before when asked about bruises on her body. Neighbors also commented that Zoe played alone and was openly resistant to wanting to go home.

Heather and Lamar were arrested this past Tuesday on charges of child abuse resulting in death. They are currently in custody, each being held on a $100,000 bond.

I’m sure you’re wondering why I haven’t raved about setting these kids on fire, as I so love to do (set things on fire, not specifically kids.) I would, but our own Jonathan Holmes has a separate editorial on the subject following this news piece, so if you want to get your opinion in check it out and map out how you’re feeling about this tragic turn of events.