My guest this week is Robert Summa, editor of video game uberblog Destructoid.

Robert: Well, to me, it’s just another case of another Jesus freak group that lack the common sense to realize what’s going on.

Robert: Well yeah, but just about every Internet-enabled device is a portal to pornography.

Jeff: If I wanted to see something racy when I was a kid, I had to beat Super Mario World and wait until the Princess kissed Mario. He would blush. I thought that was sex until I was 16.

Robert: By going to their parents’ bedroom?

Jeff: I asked my dad one, but he hit me.

Robert: Dads can be so cruel. 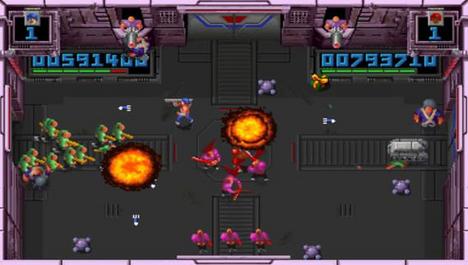 TALKING POINT: Between Xbox Live Arcade and the Wii’s Virtual Console, retro-gaming has never been bigger (or legal). What’s the best game available on either of these services?

Jeff: This one’s easy, because Xbox Live Arcade just happens to offer the greatest videogame of all time. For my money, nothing beats sitting in the dark by yourself, drinking Natty, and beating Smash TV.

Robert: I’m not a huge fan of playing the classics, but out of them all I enjoyed Smash TV the most – especially with online play. I actually prefer the originals that come to XBLA – games like Geometry Wars and the like. The only one I ever play on Virtual Console is Bomberman.

Jeff: Does that support online play?

Jeff: Well why the hell not?

Robert: None of the Virtual Console games are upgraded or enhanced in any way. Nintendo is here to make money, not give added value to their customers.

Jeff: I understand that they don’t want to mess with the classics, but we’re not talking about giving the Smash TV contestants walkie-talkies instead of guns. Bomberman screams for online play.

Robert: It sure does, apparently Nintendo just isn’t listening.

Jeff: How much would you pay for Bomberman with perfect online multiplayer? Or Mario Kart?

Robert: Nintendo just doesn’t see it as a priority. They know they can sell a ton without doing anything. It just makes business sense to them. 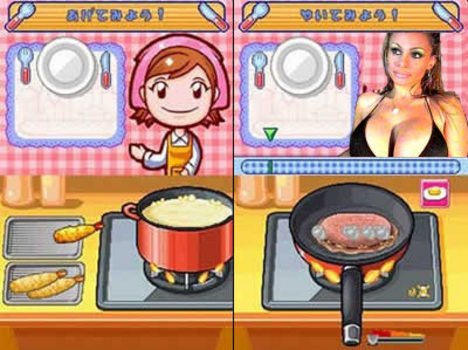 TALKING POINT: What game are you ashamed to admit you like?

Robert: I’d say Cooking Mama for the DS. It’s anime sytled game where you have to cook using a touch screen.

Jeff: Oh my god I can’t beleive you picked a cooking game! I was thinking we’d all pick something like Yoshi’s Cookie or Crash N’ the Boys Street Challenge, but Cooking Mama? What the hell is wrong with you?

Robert: I clearly have issues. Perhaps one of these Jesus groups can save me.

Jeff: I’m going with Yo! Noid for the NES.

Jeff: If a platform where you play as an 80’s pizza mascot on a pogo stick who hits Native American stereotypes with a yo-yo is wrong, I don’t want to be right.

Robert: Aladdin for the Genesis is pretty great. Some people might be ashamed by that.

Jeff: Depending on the company, it might be embarrassing to admit you like video games at all. Sure, you and I “get” Guitar Hero but a lot of people still look down on playing pretend guitar.

Robert: Yeah, that can also happen. Though, I like to surround myself in a safety bubble away from such haters.

Jeff: I find if you carry your Guitar Hero guitar with you everywhere you go, the bubble forms naturally.