Shank is a bad-ass beat-’em-up that aims to be awesome by allowing you to stab bad guys in the spleen in a gnarly manner with a fantastic cartoon art style as fluid as butter. There you have it, my preview of Shank. Sure, it’s short and simple, but I think it exemplifies pretty much exactly what Shank is. If there was ever a side-scrolling Tarantino game, I think this would be it.

I mean, really. As the titular character of Shank, you can follow up a wall run by shooting one dude dead, then proceeding to slash and juggle another with a series of shank swipes and pistol shots. Then you can decapitate another dude by grinding a chain against his neck.

Hit the jump for more with my hands-on! Super fun!

Yeah, we can all see that Shank is a violent take on side-scrolling beat-’em-ups, one that aims to help revive the genre from the dead. Which makes sense, actually. As fighting games have made a full and empowered comeback, it is certainly reasonable that their sister genre would come back. The re-release of Final Fight, as well as newer games like Castle Crashers or The Dishwasher, indicate this shift back. Shank is just the latest in a series of recent beat-’em-ups, and one with this level of polish and sheen is a nice return to form.

Since this is a beat-’em-up, having plenty of attack options is a prerequisite. Shank follows through in spades, with not one, but two shank blades; a chainsaw; dual-wielded pistols; and some grappling abilities. These are all the tools necessary for the hero, Shank, and the combo system is pretty damn satisfying. Slashing guys with a couple of blades before throwing them in the air and pistol-juggling them felt like a 2D version of Devil May Cry at its best. Some of the moves are flat-out badass, like pinning a dude to the ground with a chainsaw while shooting dudes behind you who are stupid enough to try and surprise you. Mixing things up is the best course of action, as nothing is lamer than a stagnant fighter. 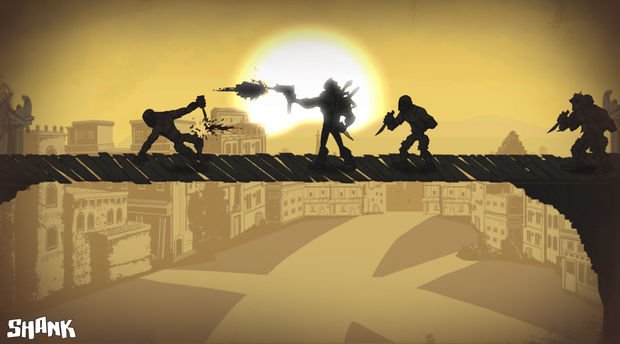 Something must also be said for the enemies. While they were toned down in difficulty to show off the combos and abilities of Shank, they look and animate fantastically. They each tend to attack Shank in different ways, and while this isn’t exactly new to beat-’em-ups, it is nice to have to approach each enemy with some understanding of how to take them down. Or, if you can sneak up on them, one shot from the pistol will take them out. Probably the best thing about them, however, is the goofy inclusion of their first names, like Jamie or Donnie. A direct allusion to games like Final Fight, named enemies will elicit a chuckle from more than a few gamers.

The boss battle I was shown, a one-on-one fight against “The Butcher,” entailed some outside-the-box thinking: normal attacks did little damage, and Shank doesn’t hold enough grenades to take him down. Shooting down some convenient slabs of beef provides an appropriate barrier against The Butcher’s chain hooks. Get him trapped, and well, you’ll be decapitating him with nothing more than a chain grinding against his neck. It’s awesome.

Short of the fighting, Shank has plenty of platforming elements to round out things to do. As far as multiplayer might go, representatives from EA wouldn’t confirm anything. Fingers-crossed that they do. 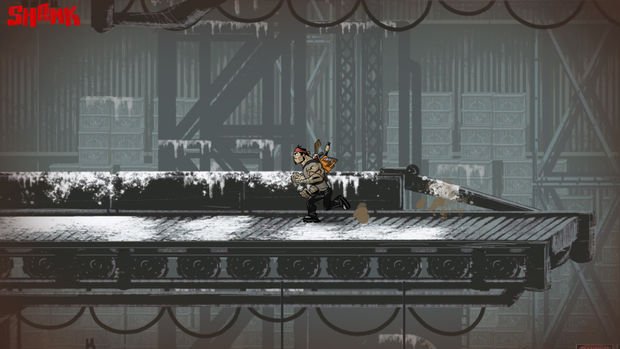 Now, all this is grand and fun, but the best element of the game is the art direction. Whoo boy, Shank is one smartly animated game, with some of the most fluid cartoon animations I have seen in a game. It really does look like a cartoon come to life, and is clearly the biggest selling point of the game. See any of the trailers of the game, and it’s obvious that Shank is designed to look even better than it plays. Small details, like portions of a stage where a dusky sunset in the background reduce the characters to shadows, and only gun shots will brighten the fight, really make Shank one of the most best looking games I have seen in a while. Both Klei and EA promise that the game is going to keep looking better in time for the summer release.

The art direction can be mostly thanked to Jeff Agala, who was director of the show Atomic Betty. He had also done work with Disney, Penguin Books, and more. With ten years in animation, Agala is apparently working hard to apply his skills to games.

Shank is a lot of fun. For the hands-on time I was shown of it, Shank does what it does well. Obviously, the animation is really impressive, and the beat-’em-up mechanics are solid. If Klei can incorporate enough to keep the game from going stale, and maybe some multiplayer or extra modes, Shank could easily be one of the most interesting downloadable titles to come this summer.