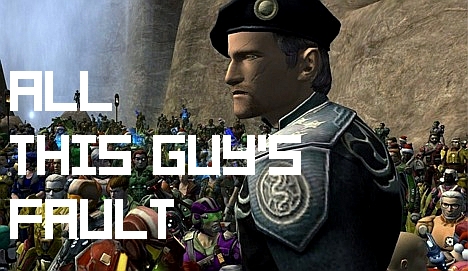 Richard Garriot’s Tabula Rasa is shutting down its live service on February 28. Players who still want to get a taste of bargain bin sci-fi MMO action will be able to play the game for free starting January 10. An open letter (in full after the break) was addressed to the community this afternoon stating the reason for the shutdown was performance-based.

For the seemingly few people still eager to pay for the privilege of playing a dying game, NCSoft (the game’s developer) has a few tricks up its sleeves. They will be offering three free months of City of Heroes and Lineage II. In addition to this, players will also be able to get access to the beta for Aion, another MMO gracing the world in 2009.

I never got the chance to check out Tabula Rasa, and I’m sad that I didn’t. I’ve always found the idea of a science fiction MMO alluring, but time has always been a factor. Are there any TR players here? How do you feel about this?

To the Tabula Rasa Community,

Last November we launched what we hoped would be a ground breaking sci-fi MMO. In many ways, we think we’ve achieved that goal. Tabula Rasa has some unique features that make it fun and very different from every other MMO out there. Unfortunately, the fact is that the game hasn’t performed as expected. The development team has worked hard to improve the game since launch, but the game never achieved the player population we hoped for.

So it is with regret that we must announce that Tabula Rasa will end live service on February 28, 2009.

Before we end the service, we’ll make Tabula Rasa servers free to play starting on January 10, 2009.

We can assure you that through the next couple of months we’ll be doing some really fun things in Tabula Rasa, and we plan to make staying on a little longer worth your while. For more details about what we are doing for Tabula Rasa players, please click here.

Stay tuned for more information. We thank you for your loyal support of the game and encourage you to take us up on the benefits we’re offering Tabula Rasa players.