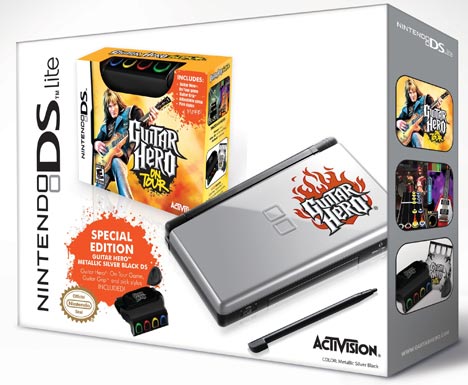 Today marks the day that Nintendo proudly (and officially) announces the DS bundle that we knew was coming all along: Guitar Hero: On Tour. While not exactly the sexiest of the DS line, the silver and black handheld proudly displays the Guitar Hero logo for all the world to see. Oh yeah… it also comes with the guitar grip controller and the game you see in the picture. Regardless of the questionable styling, we know it’s going to rock. Wouldn’t you know it — Nintendo seems pretty excited about it too:

“This one-of-a-kind bundle makes Nintendo DS even more appealing to our ever-growing audience of players,” said Cammie Dunaway, Nintendo of America’s executive vice president of Sales & Marketing. “Like Nintendo DS itself, the Guitar Hero franchise has attracted millions of new players to the world of video games.”

The press release (after the jump) makes no mention of price, but the bundle hits the streets on June 22nd, along with the game itself. Whether you choose the standalone game, or the bundle, something tells me that a trip to the store is in order.

REDMOND, Wash.–(BUSINESS WIRE)– Most musicians dream of one day reaching platinum success. A new Nintendo DS™ bundle lets aspiring axe shredders claim that coveted status right from day one. The new Silver/Black Nintendo DS branded with the Guitar Hero(R) logo will be available exclusively as part of a limited-time bundle with Guitar Hero(R): On Tour. For the first time, this smash-hit franchise is playable on a portable video game system using the revolutionary Guitar Hero™ Guitar Grip™ peripheral and fully tapping into the distinctive abilities of the Nintendo DS hardware.

Available on June 22, 2008, at North American retailers nationwide,
the bundle provides a cool combo package for grads about to head off to college as well as summertime, road-tripping rockers of all ages.

“This one-of-a-kind bundle makes Nintendo DS even more appealing to our ever-growing audience of players,” said Cammie Dunaway, Nintendo of America’s executive vice president of Sales & Marketing. “Like Nintendo DS itself, the Guitar Hero franchise has attracted millions of new players to the world of video games.”

“We are thrilled to be the first third-party publisher to partner with
Nintendo on this unique offering,” said Dusty Welch, Head of
Publishing for RedOctane. “With the Guitar Hero-branded Nintendo DS and our Guitar Hero: On Tour game and peripheral, this amazing bundle delivers gamers a complete Guitar Hero experience they can enjoy anytime, anywhere.”

Using the revolutionary Guitar Hero Guitar Grip peripheral and a
custom-designed Guitar Hero pick-stylus, Guitar Hero: On Tour
leverages the unique abilities of Nintendo DS to bring a new dimension to hand-held gaming. Featuring a wide variety of music, including tracks from blink-182, No Doubt, Jet, Nirvana, Bloc Party and many others, players can rock out in career mode, join together in co-op or go head-to-head in a “Guitar Duel” using Battle Items unique to the DS platform.

The worldwide innovator in the creation of interactive entertainment,
Nintendo Co., Ltd., of Kyoto, Japan, manufactures and markets hardware and software for its Wii™, Nintendo DS™, Game Boy(R) Advance and Nintendo GameCube™ systems. Since 1983, Nintendo has sold more than 2.7 billion video games and more than 460 million hardware units globally, and has created industry icons like Mario™, Donkey Kong(R), Metroid(R), Zelda™ and Pokémon(R). A wholly owned subsidiary, Nintendo of America Inc., based in Redmond, Wash., serves as headquarters for Nintendo’s operations in the Western Hemisphere. For more information about Nintendo, visit the company’s Web site at www.nintendo.com.

Headquartered in Santa Monica, California, Activision, Inc. is a
leading worldwide developer, publisher and distributor of interactive
entertainment and leisure products. Founded in 1979, Activision posted net revenues of $2.9 billion for the fiscal year ended March 31, 2008. Activision maintains operations in the U.S., Canada, the United Kingdom, France, Germany, Ireland, Italy, Sweden, Spain, the Netherlands, Australia, Japan and South Korea. More information about Activision and its products can be found on the company’s website, www.activision.com.

Cautionary Note Regarding Forward-looking Statements: Information in this press release that involves Activision’s expectations, plans, intentions or strategies regarding the future are forward-looking statements that are not facts and involve a number of risks and uncertainties. In this release, they are identified by references to dates after the date of this release and words such as “outlook”, “will,” “remains,” “to be,” “plans,” “believes”, “may”, “expects,” “intends,” and similar expressions.

Factors that could cause Activision’s actual future results to differ materially from those expressed in the forward-looking statements set forth in this release include, but are not limited to, sales of Activision’s titles in its fiscal year 2009, shifts in consumer spending trends, the seasonal and cyclical nature of the interactive game market, Activision’s ability to predict consumer preferences among competing hardware platforms (including next-generation hardware), declines in software pricing, product returns and price protection, product delays, retail acceptance of Activision’s products, adoption rate and availability of new hardware and related software, industry competition, rapid changes in technology and industry standards, protection of proprietary rights, maintenance of relationships with key personnel, customers, vendors and third-party developers, domestic and international economic, financial and political conditions, foreign exchange rates, integration of recent acquisitions and the identification of suitable future acquisition opportunities, the timing and successful completion of the combination of Activision and Vivendi Games, the combined
company’s success in integrating the operations of Activision and
Vivendi Games in a timely manner, or at all, and the combined
company’s ability to realize the anticipated benefits and synergies of the transaction to the extent, or in the timeframe, anticipated.

Other such factors include the further implementation, acceptance and effectiveness of the remedial measures recommended or adopted by the special sub-committee of independent directors established in July 2006 to review historical stock option granting practices by Activision and its board of directors, the finalization of the tentative settlement of the SEC’s formal investigation and final court approval of the proposed settlement of the derivative litigation filed in July 2006 against certain current and former directors and officers of Activision relating to Activision’s stock option granting
practices, and the possibility that additional claims and proceedings
will be commenced, including additional action by the SEC and/or other regulatory agencies, and other litigation unrelated to stock option granting practices and any additional risk factors identified in
Activision’s most recent annual report on Form 10-K and quarterly
reports on Form 10-Q and the definitive proxy statement filed on June 6, 2008 in connection with the proposed transaction with Vivendi. The forward-looking statements in this release are based upon information available to Activision as of the date of this release, and Activision assumes no obligation to update any such forward-looking statements.

Forward-looking statements believed to be true when made may
ultimately prove to be incorrect. These statements are not guarantees of the future performance of Activision and are subject to risks, uncertainties and other factors, some of which are beyond its control and may cause actual results to differ materially from currentexpectations.