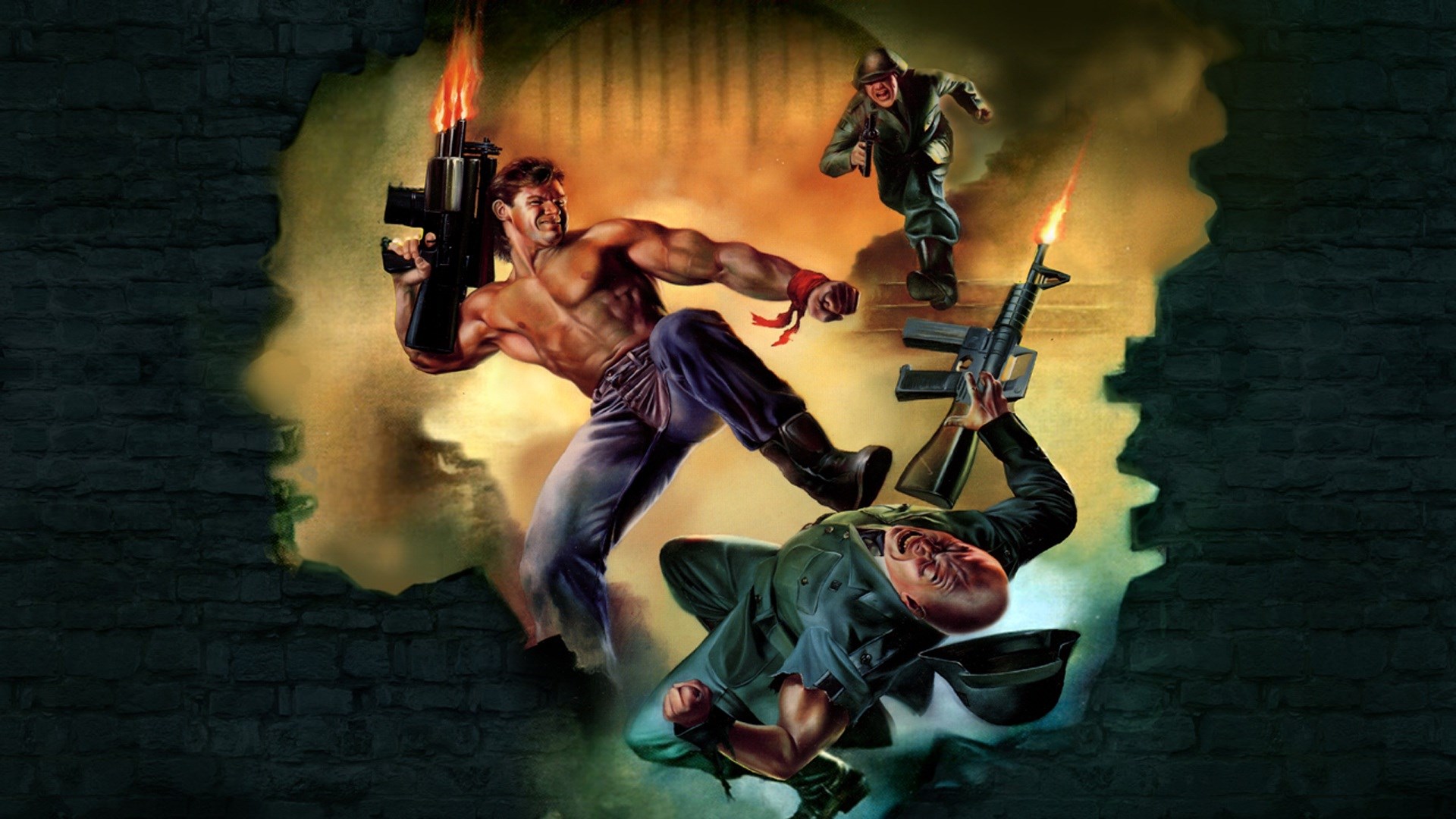 The ranking of Wolfenstein continues, and this time it’s going over not only the most iconic entry in the series, but one of the most iconic shooters of all time. As always, you can find the rank itself at the bottom. So, let’s get into it.

Wolfenstein 3D follows William “B.J.” Blazkowicz, an American spy in World War 2. While trying to steal Nazi plans, he was caught, and the first chapter is all about him trying to escape Castle Wolfenstein. The second chapter follows him trying to destroy a secret Nazi plan to create an undead army. The third chapter has him infiltrating a bunker and killing Hitler. The next three chapters are a prequel to the events of the first three chapters, and it follows B.J. as he tries to stop the Nazis from starting chemical warfare.

For many, including myself, Wolfenstein 3D is the true beginning of the Wolfenstein series as well as the start of first-person shooters. I have many memories of sitting at the high school library computers playing this game online to pass the time. The thing about playing like this, though, is that I only really played through the first few levels many times while not getting much farther than that. So for this rank, I finally sat down, downloaded a mod that allowed me to use both keyboard and mouse, and got to playing through all six chapters on the “Bring ‘Em On!” difficulty.

Before I can go any further about this game, I need to address the elephant in the room, that being the fundamental changes this game makes, even outside of the perspective. Of course, the biggest change is from top-down to first-person, but there is also a change in level dynamics. The first two games were about stealth and blending in whereas this game is more guns-blazing. This game has fixed levels compared to the randomized layout of the first two games. This game has a more normal keyboard layout compared to the mess that was the grid layout of the first two games. Id Software took the reigns over this IP instead of Muse Software who made the previous two games. The only real similarity between this game and the previous two are the World War 2 setting and the Castle, but even the castle isn’t exactly some recognizable locale in any of these three games. The real question, though, is whether or not these changes are for better or for worse. Short answer? Yes. Long answer? Let’s get into it. 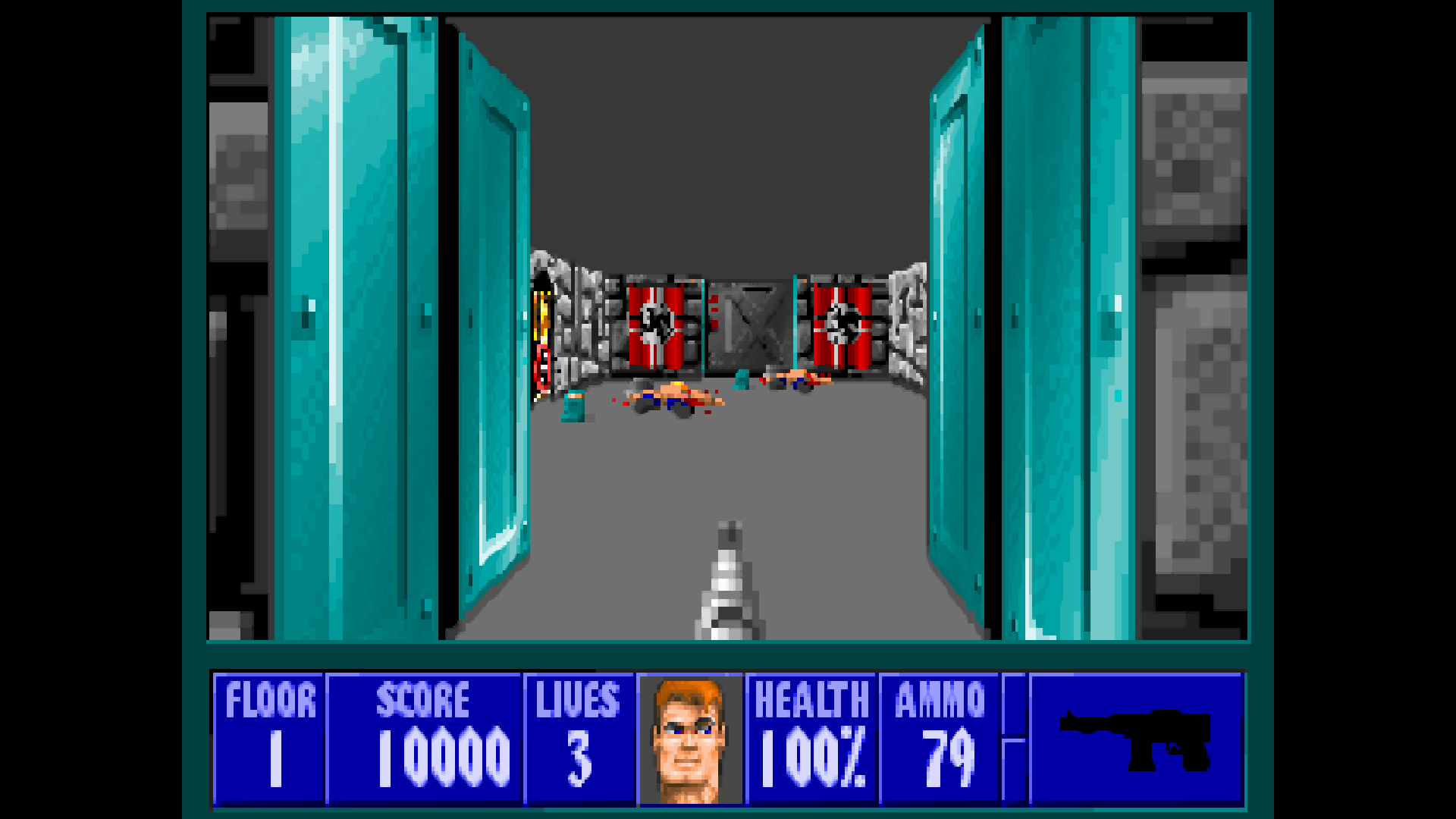 I didn’t have the right pass.

Considering the fact that I returned to this game quite a bit during high school, I think it would be pretty obvious to say this game is a lot more fun than the previous two. At the very least, this game is more playable because of its more familiar WASD controls, and a mod allowing me to use mouse to aim and keyboard to move made the game even more recognizable and easy to play (even if the strafing was broken, I couldn’t aim up and down, and the framerate was choppy). The objective of each level is simple: get from entrance to exit. In between these two points is a maze of corridors and rooms, lots of enemies, secrets, pickups, keys to unlock certain doors, and a strange color palette. At the end of each level, the game presents your final score as well as a percentage completion on secrets, enemy kills, treasure pickups, and a par time, but all of that is optional. There are three weapons: pistol, SMG, and minigun (there’s also a knife, but I never used it), but ammo drains just fast enough to where the SMG proved more useful for its slower fire rate.

Wolfenstein 3D is a game that doesn’t really change from the first level to the last. I liked this consistency, but it also came with flaws. For starters, enemy spawns are finite in every level, and not having to worry about extra spawns for staying in the level too long is a huge sigh of relief I wish other games did. Enemy patterns are also the same, which I found useful. Entering a room and firing off a shot results in all of the enemies shouting and walking towards you, which made it easy to gauge how many enemies are in each room as well as funneling them to their death. The objective doesn’t change, so knowing exactly what to do at all times made it easier to navigate the level. Some things did change, like different boss fights at the end of each chapter and secret rooms evolving from a fun thing to find to a necessary stop for supplies, but this is in large part an unchanging game.

Where this game’s lack of change hurts the experience, however, is in its rise of difficulty, which I found quite frustrating. Outside of a few new enemy types (which even then are introduced early on) and some slightly different enemy patterns over time, nothing really evolves with this game, so the one way this game increases difficulty is through its level design. What this means for the game are more maze-like levels in rooms that all look the same and more cheap enemy encounters meant to chip away at health. The further I got into the game, the less I wanted to play, and by chapter 6 I had to pull up maps of the levels online to use as a guide and save scum, but even then the game was full of frustrating BS. 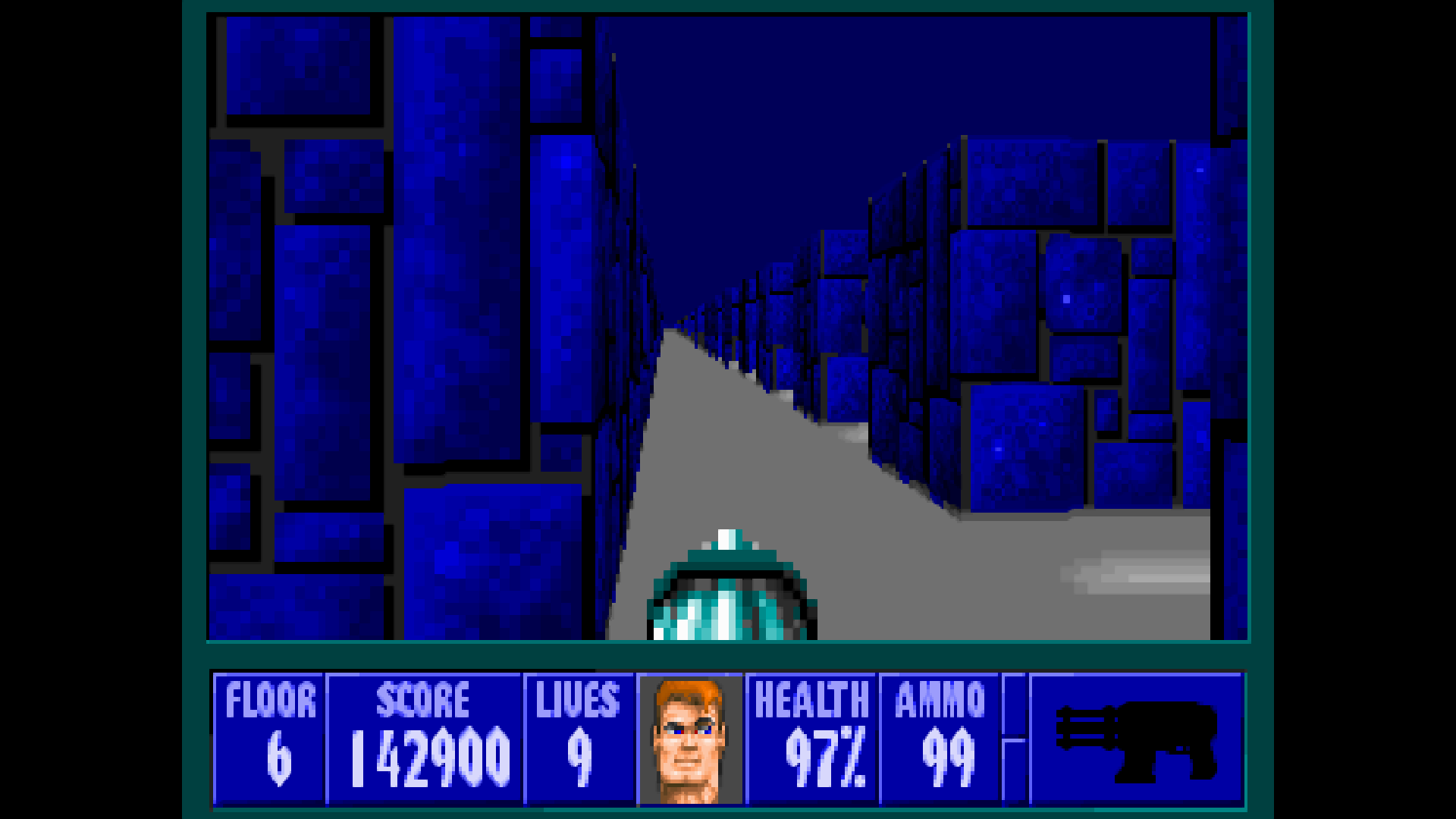 It’s a long hallway of death where enemies are just waiting to kill me around every corner.

Save scumming proved important for another reason though, as dying and respawning using one of your lives loses all of your weapons and ammo. A lot of the secret rooms in each level have either the SMG or the minigun, but trying to deal with enemies on the way to those secret levels especially in the later levels proved too difficult, so the only viable way to get your weapons back is to reload your save. I think getting rid of all of your weapons when you die is dumb especially in the later levels, but at least reloading the save restores weapons. Save scumming isn’t perfect either, though, because picking up enough treasure unlocks one-ups that I never used, so trying to hunt down treasure and secret rooms for treasure lost all usefulness to me right away. Since Wolfenstein 3D was essentially the first of its kind, it didn’t really have other first-person shooters to look at in regards to difficulty scaling, but it was still annoying to deal with nonetheless.

Wolfenstein 3D in regards to this ranking is a major step up from the previous two games. It’s change to the first-person perspective is both innovative and a lot more fun than its top-down predecessors, and having set levels and enemy spawns made the experience more comfortable. I started to grow weary of the game as it went on for its level design, but save scumming and overhead maps alleviated some of that. Because of all this and more, this game is going to the number one spot on my rank, and I honestly have no clue where it will end up by the end.