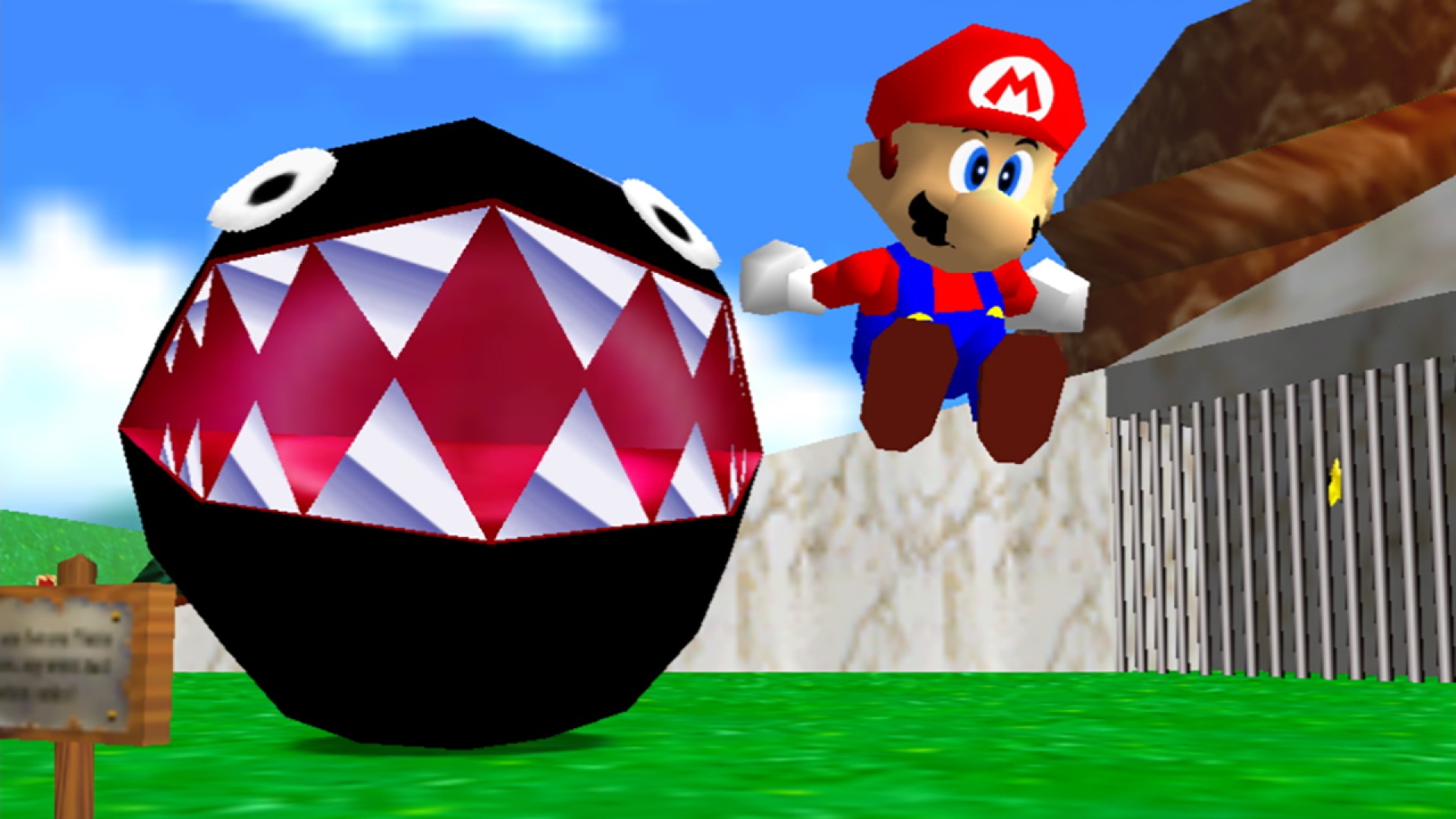 Mario turned 35 recently, and Nintendo celebrated by creating a three-game collection of 3D Super Mario games. As simple as that may sound, anyone who knows about this product knows about the…curious decisions made around the game, like a six month planned release or not including or even really acknowledging the existence of Super Mario Galaxy 2. Despite all of its questionable decisions, I still picked up the game because of my few-but-fond memories of Super Mario Galaxy and to play Super Mario 64 and Super Mario Sunshine for the first time. So, over the course of three blogs, I will be exploring each of these three games, starting with one of the Italian plumber’s most iconic games: Super Mario 64.

Super Mario 64, originally released in 1996 and the first Mario game to go 3D, is considered one of the best games of all time. Despite its incredible influence and importance, however, Nintendo didn’t really care enough to even update the game for the Switch. I didn’t want to spend too much time on this topic, so I might as well get it out of the way now: Super Mario 64 in the Super Mario 3D All-Stars collection is a bad port of the game. Call me entitled, but I think spending 20 USD (if you take the price of the collection and divide it between the three games) for a game released in 1996 should mean some work has been done to modernize it for new systems. Even if Nintendo wants to argue about keeping the original visuals in for the sake of ‘purity,’ at least optimize the title for the Switch. But instead, the game runs at 960 x 720 resolution, 30 frames per second, and has some polished-up visuals. There are homebrew ports of this game available for free at higher resolutions, better framerates, and even include meaningful gameplay improvements, so seeing this game made by Nintendo and being sold for money one-upped by modders is disappointing and shows a lack of care for their mascot. 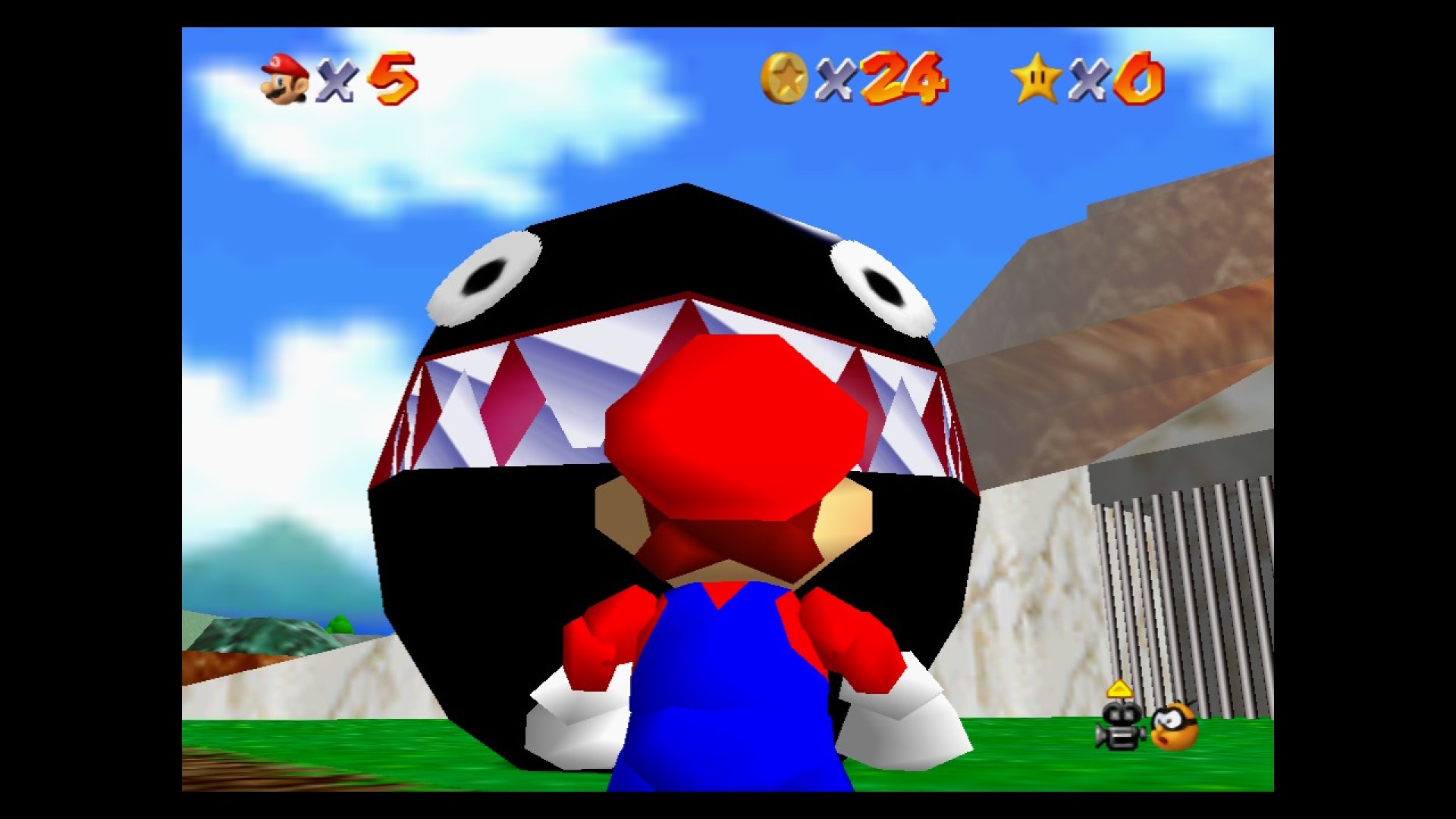 Couldn’t be bothered to get rid of the letterbox I guess.

Now that I got that off of my chest, I want to get into the meat and potatoes of this first game. After picking up all 120 stars of this game, I can say that this game is great… but it also hasn’t aged that well. I already know talking about a game like this is ultimately going to lead to the debate about experiencing the game now versus experiencing the game when it came out and whether or not nostalgia plays a factor, so I want to be clear that this whole thing is of the perspective of a new player with some nostalgia for 3D Mario games. I think this game has some incredible high points and it still manages to tap into that childhood magic that other Mario games excel at doing, but there are also some frustrations that kept me from truly loving and getting into the game.

I think the best place to start with this game are the controls, which I found surprising because of how many movesets there are. I played Super Mario Odyssey before this game, and I remember its large list of movesets and the ability to chain moves together. Since this is an older game, I was only expecting a small fraction of those moves to be here, and for future titles to build up that list, but this game actually has a lot of it from the get-go. Triple jumps, long jumps, backward somersaults, wall jumps, body slams, the ability to ride a Koopa Shell like a skateboard, tree shimmying, and more can be found here. Having these movesets available made it a lot easier for me to get into this game because of my memory of using them in Odyssey, and I like the fact that both games embrace player creativity by allowing these moves even if it means going outside of the beaten path. There are a few movesets that aren’t so fun like flying, and sneaking is practically worthless, but the movements overall are a lot of fun.

Where the controls fail and what ultimately aged like milk with this game is the camera. Instead of an analog camera with a smooth 360 degree turn, this camera follows Mario and can be rotated at different angles. While that may sound fine, my experience with it felt like an untamable beast because the camera often collided with walls and didn’t attach to Mario’s shoulders.. The game does have a few options around the camera, but nothing helps shake the feeling that it feels archaic and makes the game harder to play (something that should’ve been updated with this version and something that’s been fixed by modders). The best thing this game does with the camera is make it a character, so I could at least have something physical to blame. 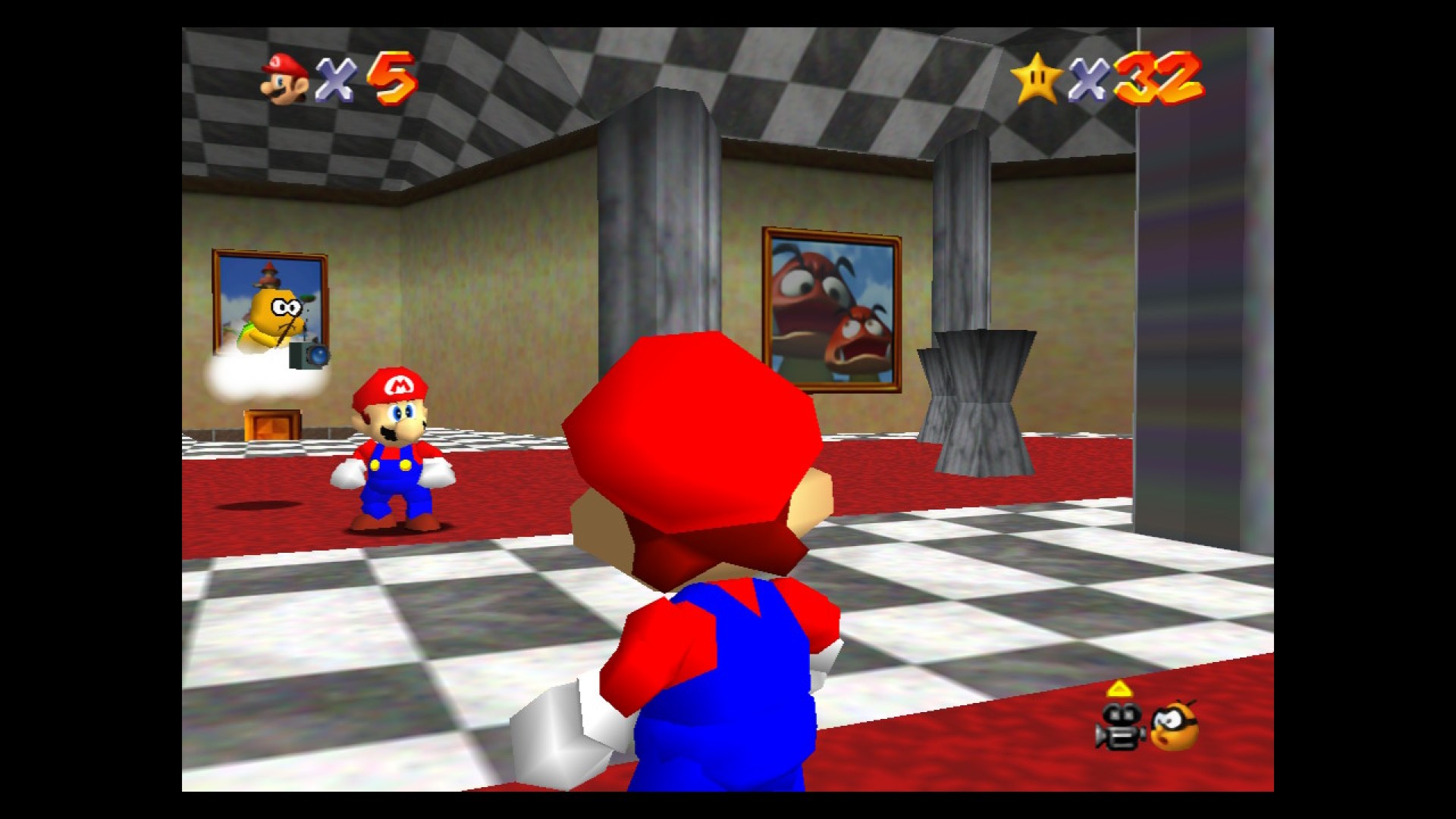 C’mon, Lakitu, do your job.

Super Mario 64 takes a very open approach to its levels by offering up courses to explore at your pace. There are a few star thresholds here-and-there, but in what order you get those stars is up to you. This more open approach allowed me to go at my own pace which I enjoyed, but at the cost of a tighter narrative control. I also like how uniform the structure of this game is. There are 15 courses with seven stars each, as well as 15 stars in the hub world that is Peach’s Castle. Where things get a little messy, though, is when you actually start to pick up stars. Every time you pick up a star, it boots you back out to the hub world and asks if you want to save. Not only was this annoying, but getting booted out resets coin count and coin drops, which was especially annoying considering each course has a star that requires 100 coins to get. Compared to the camera controls, this wasn’t the biggest of my problems, but it also felt like an unnecessary issue that can’t really be blamed on the time it released.

One thing the Mario games excel at is keeping things fresh throughout the game, and this is no different as each course is mostly unique from one another in theme, music, and stars. One minute, you are sliding down a slippery slope on an icy mountain, and the next, you are dealing with the moving parts of a clock. The levels were a lot of fun to explore, but they too had their ups and downs. Courses 8-10 (Shifting Sand Land, Dire Dire Docks, and Snowman’s Land) were frustrating nightmares for me because of either how easy it was to instantly die or parts of the maps that were frustrating to get to. The courses up to this point were enjoyable, but these three courses slowed down my roll with this game tremendously. What got me back up to speed, however, were a few of the courses after Snowman’s Land, including Tiny-Huge Island, Tick-Tock Clock, and Wet-Dry World. I found these worlds to be super cool because of the ways a single mechanic altered the entire stage. Playing around with the different water levels in Wet-Dry World or seeing where I can or can’t go as a giant Mario in Tiny-Huge Island felt like the game at its best because it played to the franchise’s strength of keeping things fresh and made exploration a lot of fun.

Getting into stars, I found a lot of them to be fun to try and get, with a few exceptions. Each course has seven stars: five unique to the area, one star that requires 100 coins to be picked up, and one that requires eight red coins to be picked up. The two coin stars in each area didn’t differ much between levels, with the exception that coins were a bit harder to find in larger maps because of how bad the pop-in is (something that could’ve been fixed by Nintendo), but that still left a lot of unique and fun stars to be found. I was even surprised to find a few Koopa races because I thought they were new to Odyssey. While there are some formulaic ones like getting to the top of any course that has some sort of vertical climb or fighting bosses that all have the same weakness, a lot of the stars kept the game fresh throughout each course, and I enjoyed trying to get most of them. Sadly, the reward for getting all 120 stars is rather anticlimactic, but these games have always been about the journey more than the destination for me. 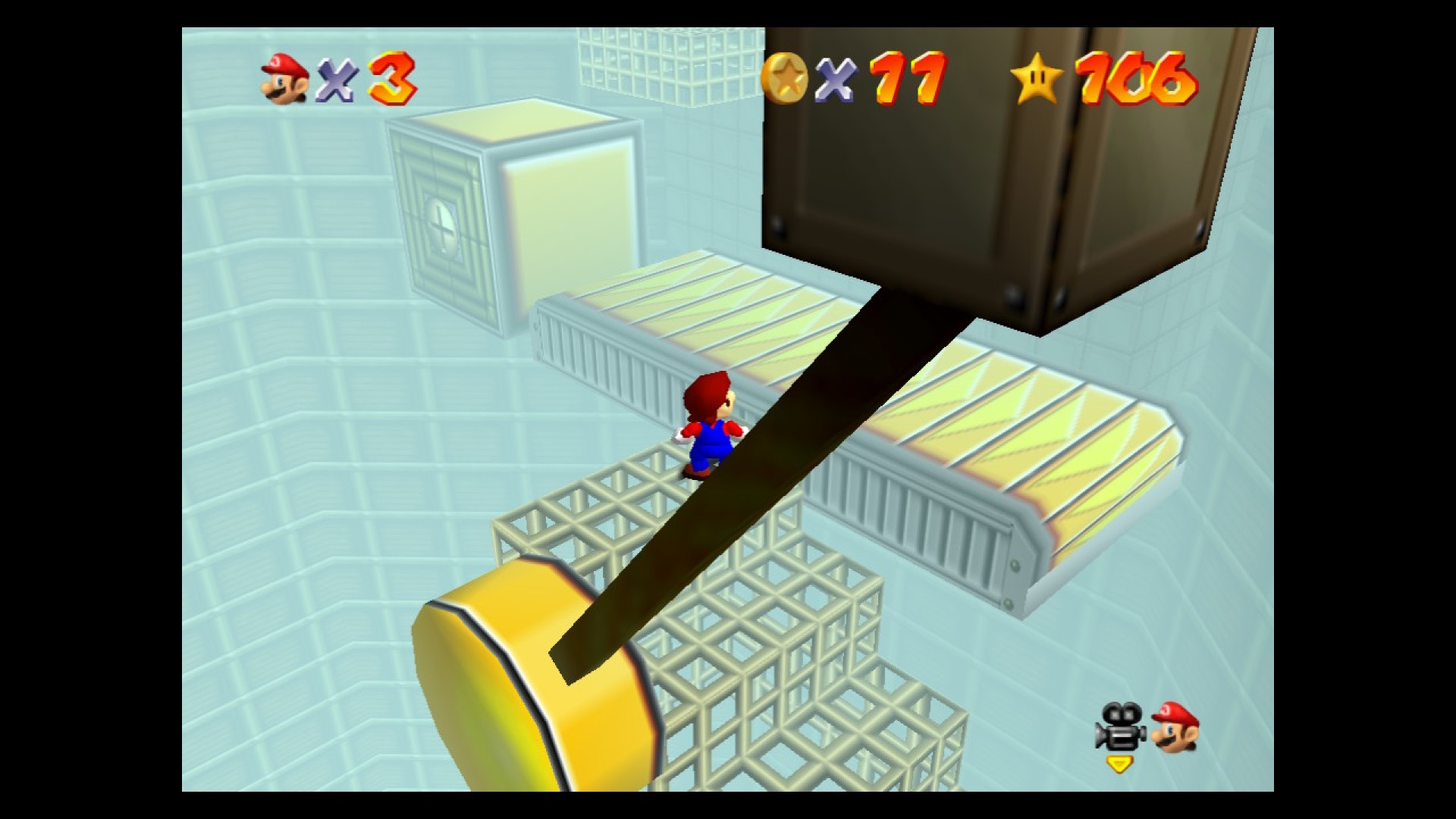 Climbing to the top of a clock that moves depending on when you entered the level is pretty cool.

While this game doesn’t hold up particularly well in a few spots, Super Mario 64 is still a lot of fun to play more than 20 years after its release. If anything, enjoying this game as much as I did made me a little more frustrated with Nintendo’s lack of care because I think it deserved better and a lot of the issues I had with this game could’ve been easily fixed. I’m normally not one to promote downloading ROMs unless you have to, but there are free modded versions of this game that fix all of the issues I had with the game and then some, and I think them beating Nintendo at their own game is pretty embarrassing. Even with its issues, I still managed to find that giddy childhood magic that Mario games excel at finding, and I can’t wait to dive into the next two games.