Chronos: Before the Ashes (PC) Review 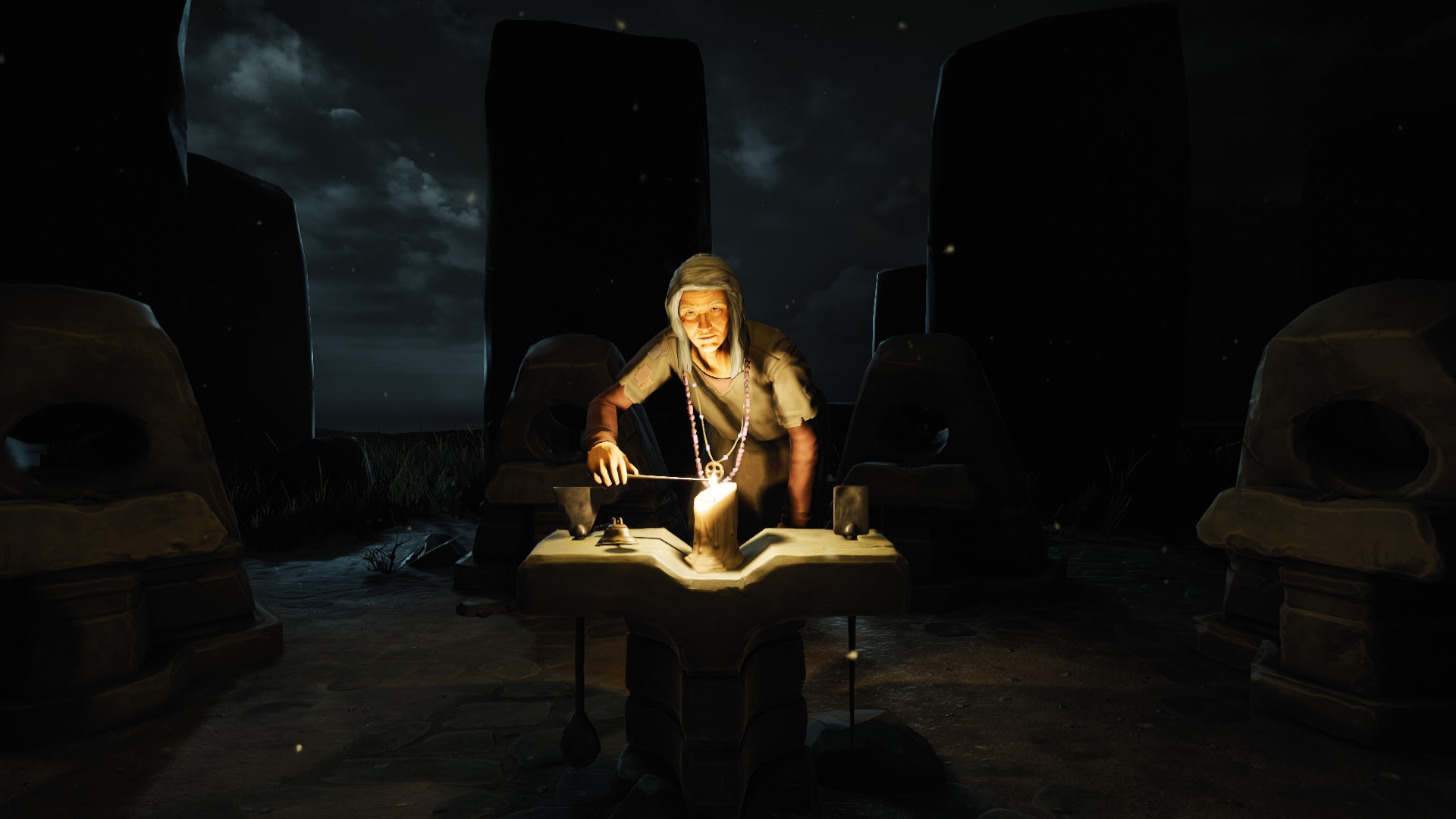 Remnant: From the Ashes was one of my top games of 2019, so a new game taking place in the same universe piqued my interest. Interestingly enough, this game was actually a melee-focused VR game released in 2016 that is being overhauled to play on non-VR systems, which I think muddies the water on being considered a prequel to Remnant. While it doesn’t quite live up to its brethren, it still is a fun game to try out if you like that setting.

Taking place in the same world as Remnant, you play as an unnamed hero on a quest to kill a dragon. While it sounds simple enough, the reality of the situation is anything but, because the dragon resides in a labyrinth that only opens once a year, and dying kicks you out until the next opening. As the years go on, your hero ages, gaining more experience and (hopefully) getting further into the labyrinth than before.

Much like Remnant, Chronos could be described as a Souls-like, but it doesn’t paint the whole picture. This game takes that formula and differentiates it enough to make it stand out, and while its difference are more subtle than Remnant, they still make the experience unique.

So, what are the differences? I believe this game mixes in influences from The Legend of Zelda and rogue-likes in interesting ways that I haven’t really experienced in a Souls-like before. This game reminds me a bit of The Legend of Zelda for its more linear level design and heavier focus on puzzles. The occasional interweaving corridors can be found here, but this is a much more linear affair than others. The puzzles make a big presence in this game, and I really enjoyed a lot of them because while none of them were too complex, they mostly gave me a lot of aha moments that I like to get out of puzzle games. In terms of its rogue-like presence, while there aren’t any randomized elements in this game, I found a greater focus on runs between death in this game. Unlike other Souls-likes, healing items and enemies do not reset at World Shards (the bonfire equivalent), but only upon death, which gives a familiar feeling of trying to get as far as possible on a run and puts more value on healing items than before. I surprisingly enjoyed this more linear, puzzle-heavy take on Souls, and the combination of combat and puzzle got me hooked in enough to play seven hours of the game’s nine hour campaign in a single day. 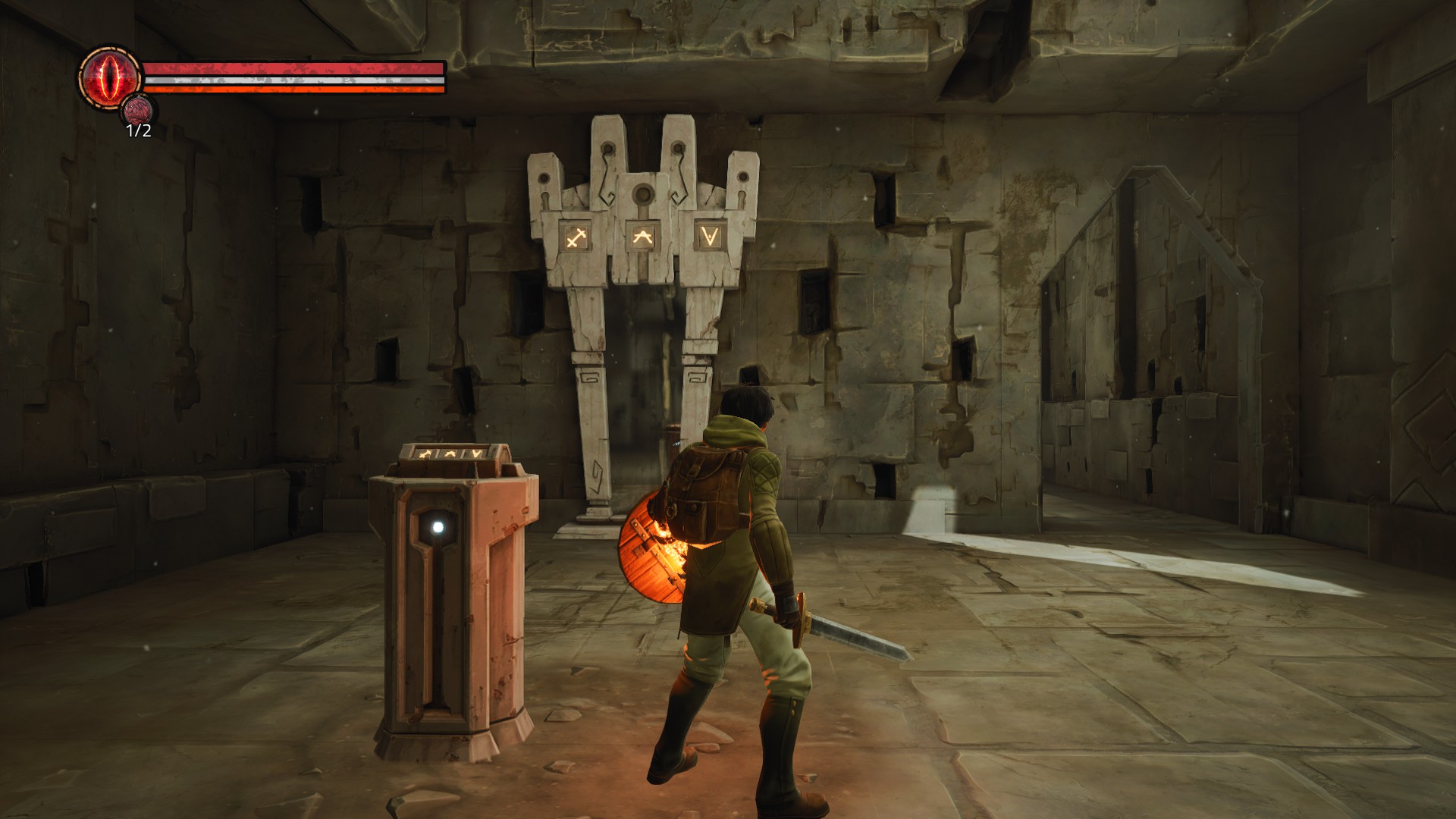 One puzzle involves these mirrors that teleport you to other places depending on the code above each mirror, and I had fun trying to figure out what to do.

Specifically, the rogue-like presence in this game seems to promote dying a lot, which makes sense considering the game’s most unique mechanic: aging. Every death makes your hero a year older, and my biggest interest going into the game was seeing how age affected the gameplay. I found death to be both frightening and fascinating because I wanted to see those changes but was scared of the negative consequences of being old. As it turns out, there isn’t a whole lot of change. Outside of the aesthetic like voice and appearance, the only changes I noticed were with upgrades and traits. There are four stats to upgrade (strength, agility, arcane (magic), and vitality), and aging affects what you can upgrade and how expensive the upgrade is. The young ages are focused on strength and agility, whereas getting older is focused on magic. I thought the focus on magic with older age would slowly turn my hero into a mage or something like that, but magic only affects an ability tied to the basic combat, and the gameplay overall didn’t change between ages eighteen and eighty. There are also traits that unlock every ten years, but they mostly offer stat buffs as well. I think the concept of aging in a game like this is neat, but I found the threat of aging more engaging than the aging itself.

A Souls game wouldn’t be complete without combat, and this is no exception. Even compared to other Souls games, the combat in Chronos is especially slow. While I think its slower movement felt new by forcing me to play much more defensively than usual, I found more issues with it than anything. Dodging is slow and insignificant, the hit-to-block speed is annoyingly slow, healing takes way too long, and parrying is too inconsistent to use. There are arcane abilities that help with some of this though. Arcane abilities charge up with enemy hits and when used give a temporary boost like faster attack speed, enemy stagger, and even life steal. They are fun to use, but like I said earlier I was hoping for something more out of this game’s magic, and the abilities feel like a band aid for combat more than anything. 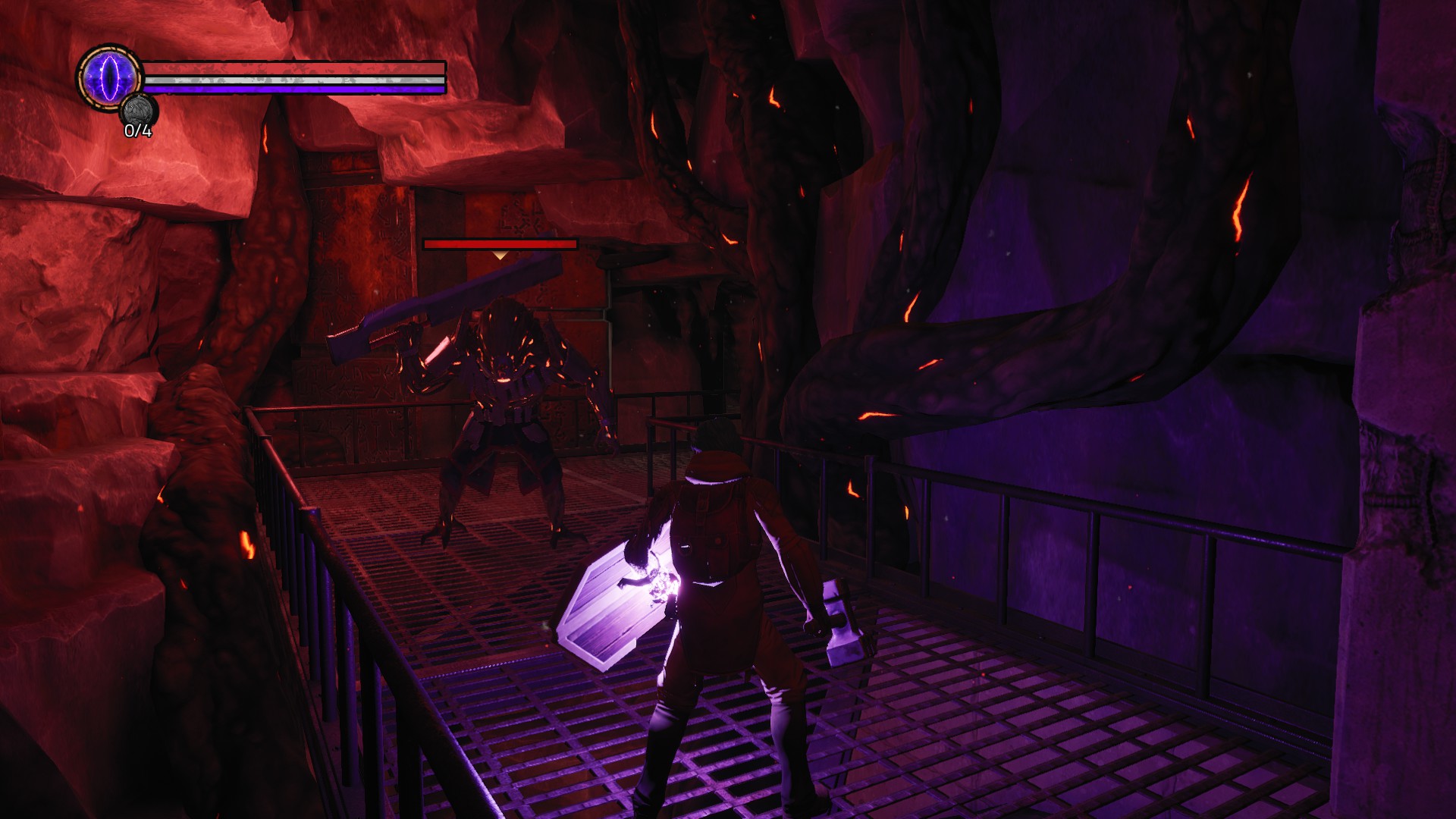 A few of the enemy types will be familiar to Remnant players.

The speed isn’t the only issue I had with the combat though. Parrying and blocking are two separate buttons which I am not a fan of, there isn’t a lot of variety to weapons or shields, the only way to play is with weapon and shield, the leveling is a bit too fast to the point where it became a more consistent and free form of healing than the game’s Estus Flask equivalent, and the camera can get wonky when pushed up against a wall. Despite the speed of the combat and the issues I had with it, I actually found this game (on the normal difficulty) to be quite easy compared to other Souls games. With the exception of the final boss, I beat all of the bosses within one death and finished the game at age forty-three (the game starts at age eighteen). While I think there is a place for this game as baby’s first Dark Souls, I found that its easier difficulty didn’t allow me to fully explore aging, which led me to loading my save up after defeating the dragon and killing myself over and over just to reach age eighty and see those changes. The harder difficulty is quite a bit more difficult, so I am really blazing through the years there, but I think the normal difficulty is a bit too easy for those expecting a Dark Souls experience. Overall, the combat in this game is a bit too slow in the wrong ways, but it does have some merit.

Finally, there is the story, which really isn’t anything. There really isn’t any plot going on here other than some computer terminal dialogue here-and-there, but none of it is attention-grabbing. At one point, there is this huge twist that happens and the game tries to make a big deal out of it, but the twist was obvious, and even if it wasn’t I didn’t care enough to be shocked by it. None of this is to say the non-gameplay elements are completely devoid of merit. This game has a much more Medieval and cartoonish look to the game compared to Remnant that lightens the mood a bit, there are some cool moments in this game like trying to move around the first boss before being able to fight it or the fate of the character in the ending, and I think at the very least Remnant’s setting is pretty cool. None of the story is really worth the time in this game, but there is at least some unique aspects around the edges. 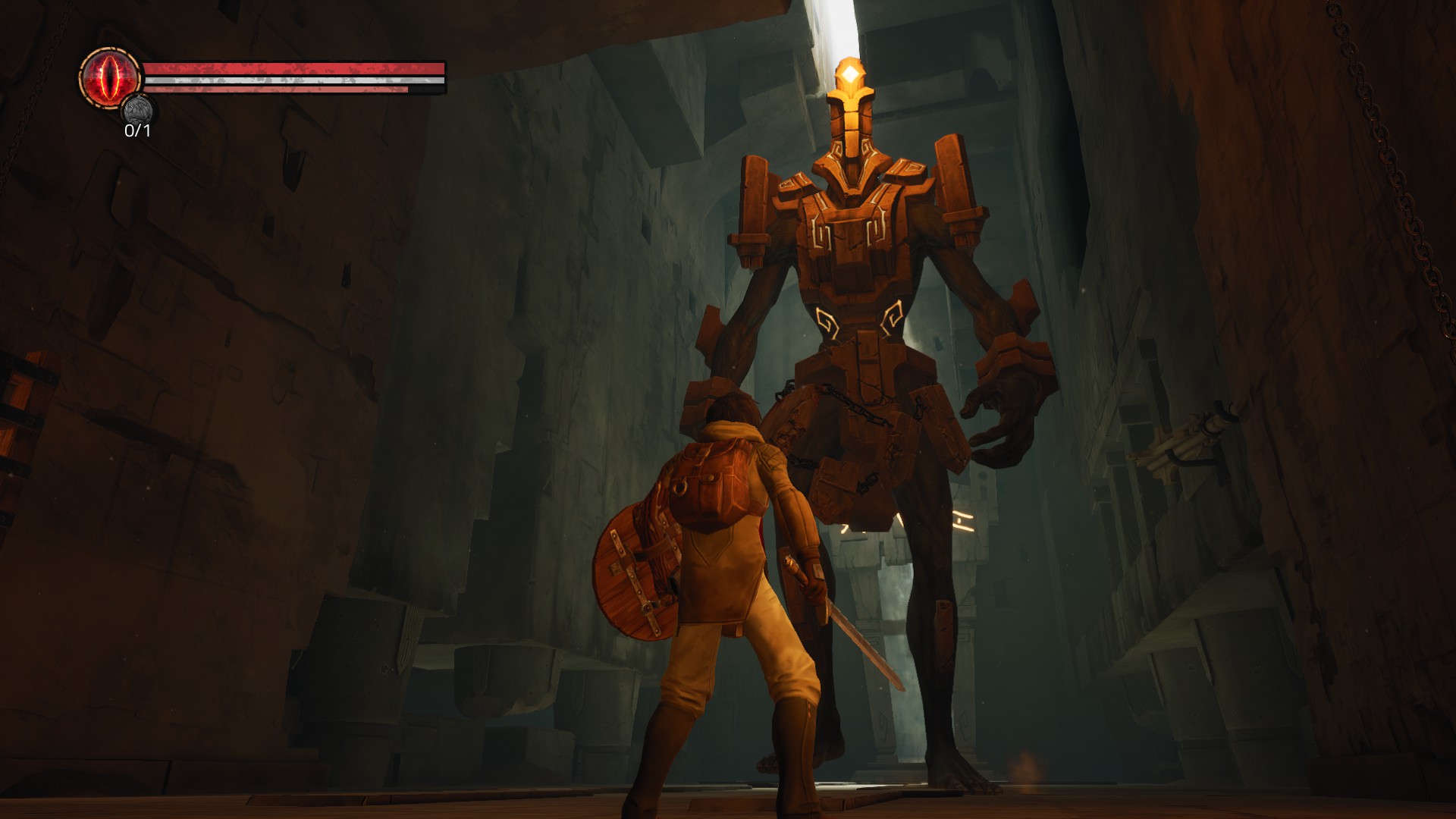 The buildup to the first boss is pretty cool.

Chronos: Before the Ashes isn’t the best Souls game I have ever played, but it was still fun and unique enough to suck me in. There isn’t really any replay value and the combat could be better, but its greater focus on puzzles and the way this game handles dying gives reason to keep playing. I think the game is worth checking if you are new to the Souls series or are looking for a singleplayer experience to pass the time.