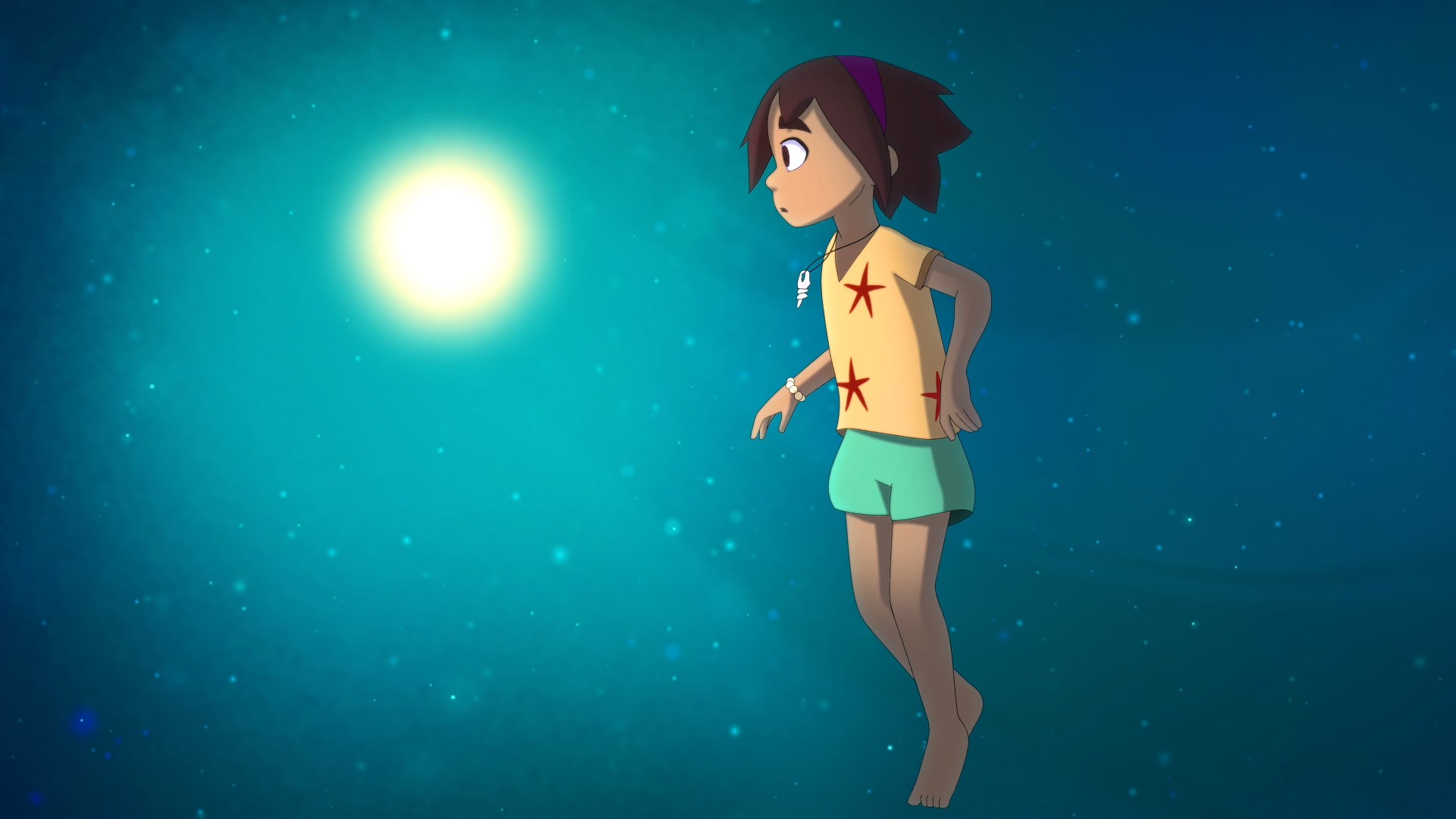 Note: Review code provided by Terminals and the developers.

Games like Moonlighter and Slime Rancher fit into this special category of mixing two genres together. One is more mundane like shopkeeping or ranching, while the other is more exciting like dungeon crawling or exploration. I don’t know what this style of game is called, but I am in love with it. Another game to fit into this genre is Summer in Mara, a game that mixes farming with a nautical adventure. The developers eyes may have been bigger than their stomachs on this game, but that doesn’t stop it from being fun and full of heart.

Summer in Mara takes place in an area known as Mara, which is an archipelago. You play as Koa, a girl rescued from a boat explosion by an elderly woman named Haku. The game starts with Koa at age eleven, shortly after Haku died. One day, while tending to her island, she meets a creature named Napopo, who is lost. This, plus the fact that she’s been cooped up on this island her whole life, pushes her to start exploring the archipelago she inhabits.

Much like the games I referenced earlier, this game can be split into two parts: the mundane part and the exciting part. The mundane part includes farming, mining, and fishing, while the more exciting parts include sailing, exploration, and completing tasks. Both of these aspects have one major thing in common: they are both chill. Every part of this game feels peaceful and relaxed, and I really appreciated that considering this game is about trying to juggle the two.

In terms of the mundane, this game is rather basic, but I’m fine with that. On your island, you have four rows of dirt that you can use to grow seed. All you do is just plant the seed and wait for the in-game days to roll by. There are some boosts to growing, like watering the plants to speed up the process and fertilizer to grow a bigger yield, but it’s as simple as it get. One thing I found neat with the farming is how you water and fertilize plants, as for you pick up the water or fertilizer and spill it behind your back. This means you have to almost strategically walk around your plants and try to get as many of them covered before you run out. The water and the fertilizer aren’t necessary, but it’s still a neat little touch. 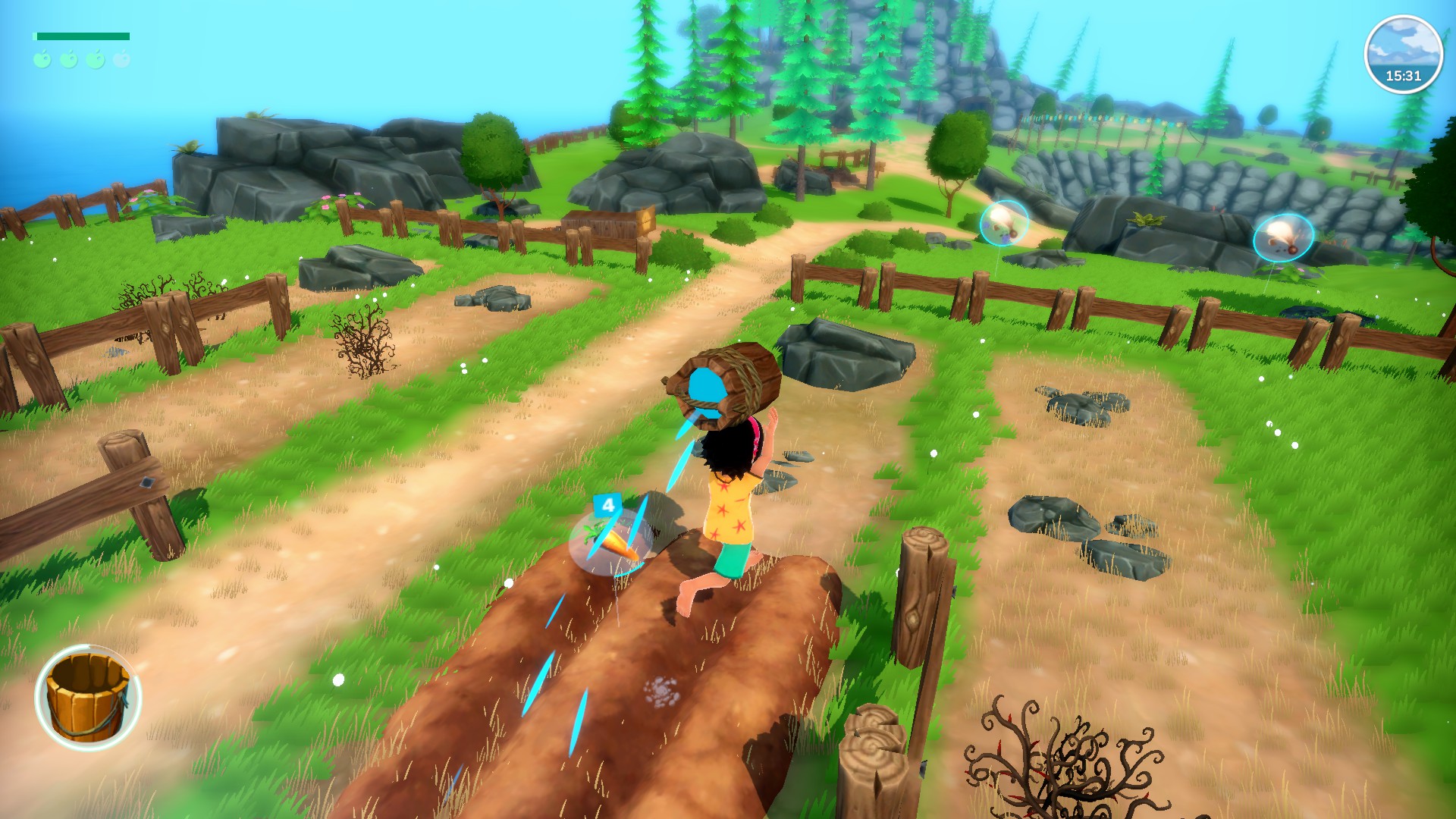 Whenever you move, you slowly run out of water.

Not everything is constricted to those fields, though, as for you can plant normal trees and fruit trees anywhere on your island. Unlike the vegetables, all of the different types of trees drop either a fruit or a sapling that can be used to plant another tree, making them more self-sustaining. Outside of growing, there is also mining, fishing, and decorating your home island. The mining isn’t anything special, but it gets the job done. The fishing is pretty neat, as for different fish require different baits, and failing the fishing mini-game results in the loss of a thread. As for the decorating, it isn’t anything special, but a lot of the decorations either unlock crafting recipes or upgrade the island such as animal pens or a mining shaft. All in all, I would say none of it is spectacular, but it all gets job done.

So, what is the “exciting” part of this game? The other half of this game involves sailing, exploring the other islands, and doing tasks. A large part of this game takes place on the island of Qalis, which is north of your island. This island inhabits a small city, which is where you meet most of the characters in this game. Each character has a long list of tasks to complete, ranging from delivery to asking for certain items and even a few involving visiting other islands. The bulk of this game is going back and forth between your island and Qalis to either sell items for money or complete quests. Could it be seen as grindy? Yes, but I feel the whole point of this game is to always have something to do, which this game does well. There is always one more quest to complete and one more plant to grow, and this design is why I like this style of game and how I end up sinking hours into a single sitting. What I found great with this game is how they sneak in surprisingly great characters into all of this.

I knew there was a story about trying to stop a group known as the Elits going into this game, but I didn’t really care about the story for the first half of my time. I was just completing quests to complete quests, and I felt the “main” story of this game was just Koa going on an adventure. The more I focused on the characters, however, the more I realized how much is there. Each character you encounter and do quests for has their own characteristics and character arcs, and a lot of them have some sort of struggle you are trying to help them through. Koa herself is a rather naive but adventurous kid who is just starting to learn the ways of the world, and a lot of her dialogue feels believable. You can see themes of love, loss, moving on, and forgiveness throughout all of these characters, and it makes a lot of them feel human. On top of that, this game has a beginning ending story cutscene that gives a feeling of adventure and finality that really speaks to the themes of this game. I absolutely love these two cutscenes, and I wish there were more. What also really elevates the story is the music, which I loved. The only issue I had with the story were with the Elits. None of that side of the story felt necessary, and they distract from what makes the rest of the story great. Still, I really enjoyed being around all of the characters and helping them get past their struggles. 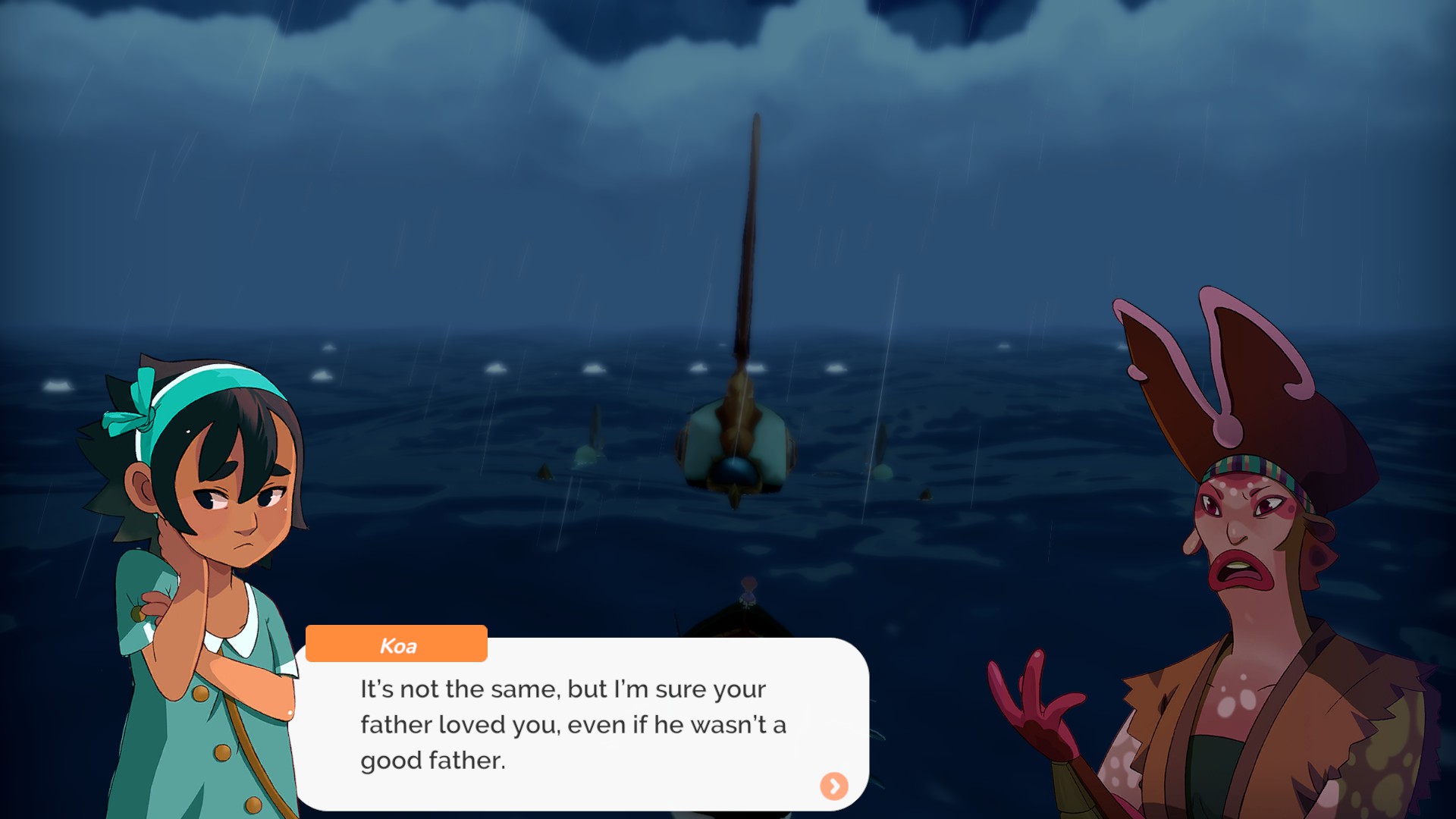 Some of the characters and dialogue surprised me with the topics and themes they go over.

Not all of these character are on Qalis, though, which is where the sailing comes in. There are around 25 islands to explore, but none of them are as meaningful as the main two. They either hold a specific resource, have a building or two, or have some neat gimmick like a lot of pigs or an island with moving pots. I only found myself going to these islands if I had to, as for they aren’t really worth the trouble. While sailing to these islands, the waters are filled with either pickups, fishing spots, diving spots, or pirates wanting to race. The pickups and fishing spots are fun, but the diving and racing mini-games are awful. The diving mini-game feels cheap yet relatively inoffensive, while the racing mini-game has the worst rubberbanding I have ever seen. What really breaks the immersion of this game in relation to the islands and sailing, though, is the fact that you have to load into each island area instead of having one continuous archipelago. The loading screens aren’t long, but they do speak to a larger issue with this game.

The biggest issue this game struggles with is how under-developed it looks and feels. I don’t know if the game needed more time, more money, or more developers, but it feels like a really early build of the game. The day/night cycle feels fast and the visual time changes are sudden and awkward, the music cuts in and out at random times, nobody in the town moves, Koa’s jump is comically high and stiff, any wall short of a 90 degree angle can be easily climbed, grass textures in certain areas are missing, I could only scroll through shopping menus with a controller, character sprites sometimes block my mission objective in the menu, a lot of the larger textures are flat and painted to look like they’re 3d, and more. Also, this game is missing some helpful features like a compendium for the different items in the game that says their grow times and value (especially considering some vendors buy items at higher values than others), the ability to change controls, and the ability to make items outside of the house. Personally, I think the gameplay suffers as a result of the game’s scope being too large to handle, and I wish they focused more on quality over quantity. 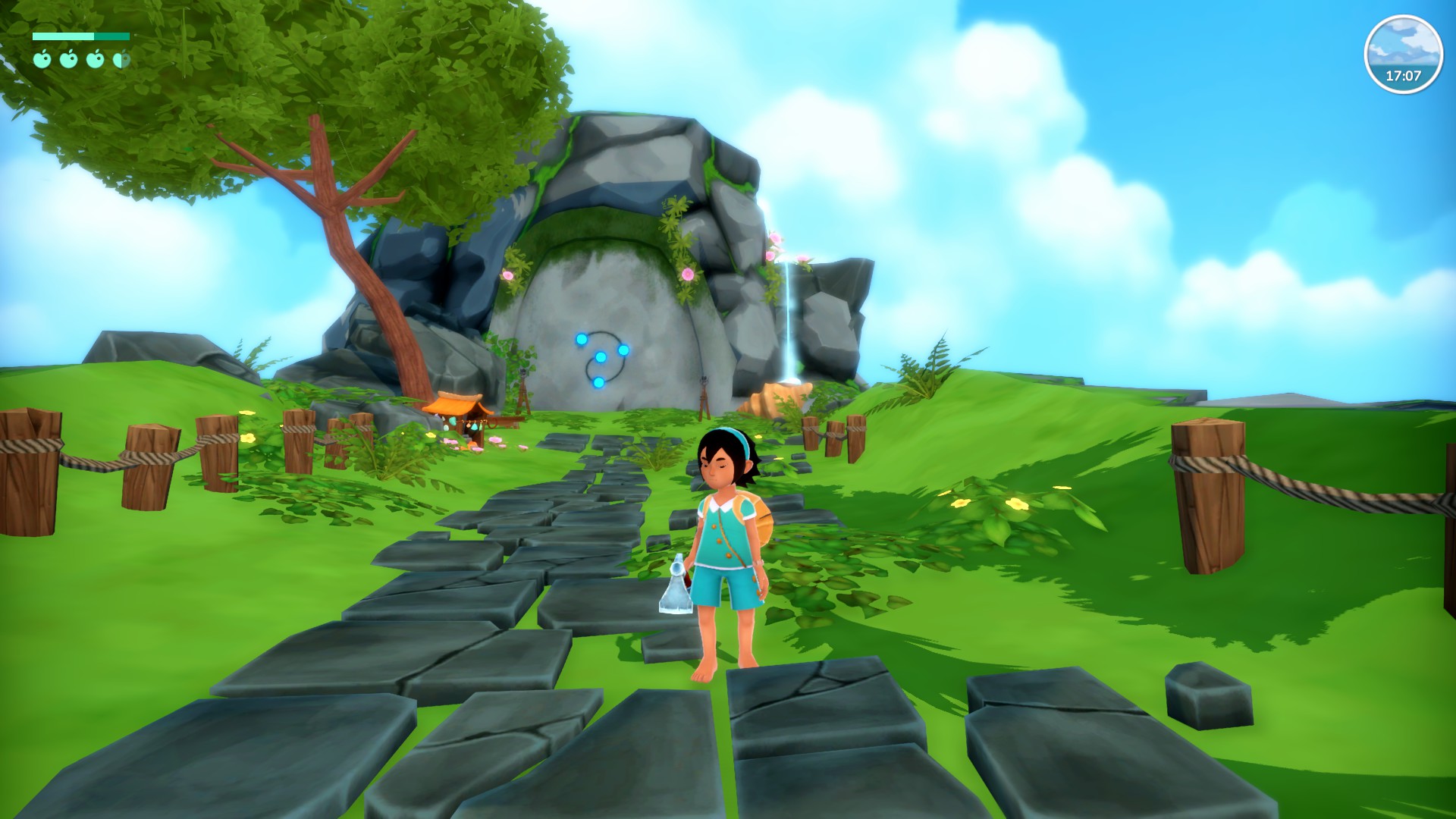 Some areas look like painted ground instead of actual terrain.

In conclusion, Summer in Mara is a game full of technical shortcomings, but also a game with bright attitude I couldn’t help but enjoy. Those looking for deep gameplay mechanics won’t find enjoyment here, but it is a relaxing game to sink hours into. I would recommend this game to anyone looking for a similar experience to Slime Rancher or just looking for a game with a more upbeat tone.