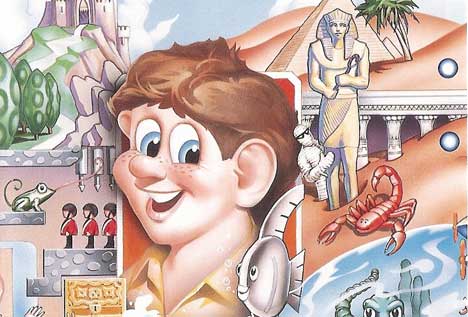 It seems like regardless of what Nintendo pushes out to the Virtual Console, you guys are never really happy.

Still, the bizarre public outcry for Alex Kidd in the Enchanted Castle has been heard, as it makes its way to the VC today for the expected Genesis pricing of 800 points. It’s joined by the TurboGrafx-16 game, BRAVOMAN (800 points), and the NES port of Galaga (500 points).

Normally, this would be there part where I mention that other digital distribution services offer arcade ports of Galaga for less money, in addition to offering leaderboard support. But I won’t do that, because we’re just happy Alex Kidd is available. Right?

Do you have an itch to blast bug-shaped space fighters?  Have you ever whether Dr. Bomb was a medical doctor or a Ph.D.?  Do you resolve all your disputes with a heated round of Rock, Paper, Scissors?  If you answered yes to any of these questions, you’ll want to pay a visit to the popular Wii(TM) video game system’s Wii Shop Channel.

Three new classic games go live at 9 a.m. Pacific time.  Nintendo adds new games to the channel every Monday.  Wii owners with a high-speed Internet connection can redeem Wii Points(TM) to download the games.  Wii Points can be purchased in the Wii Shop Channel or at retail outlets.  This week’s new games are:

Galaga(TM) (NES(R), 1-2 players, 500 Wii Points): Players control their fighters, with their unique ability to combine with other fighters and shoot down the invading aliens.  Aliens attack in formations using a variety of attack patterns.  Rescue a captured fighter to combine with it, forming a Dual Fighter with twice the firepower.  Earn Perfect Bonuses more easily by using a Dual Fighter on the Challenging Stages.  Galaga was released in 1981 and became an instant classic with its innovative fighter-combination system and varied enemy attack patterns.

BRAVOMAN(TM) (Turbografx16, 1 player, 600 Wii Points): The village of Nitta has been invaded by the army of Dr. Bomb, an evil scientist who is plotting to take over the world.  Facing this crisis is Bravoman, who received his powers from Alpha Man to stand up against Dr. Bomb in the name of justice. The village of Nitta consists of 22 stages — action stages that take place on the ground and shooting stages that take place underwater.  Action stages use a unique control system in which the height of a jump and the distance of an attack changes depending on how long players hold down the button.  Players collect the Luck Symbols that appear when they defeat enemies and give them to Lottery Man to get recovery and power-up items.  Stop Dr. Bomb and bring peace to the village of Nitta and the rest of the world.

Alex Kidd(TM) in the Enchanted Castle (Sega Genesis, 1-2 players, 800 Wii Points): When King Thor was kidnapped, his son, Alex Kidd, held out hope that his father would return to their kingdom on Planet Aries.  Finally, it was revealed that he was being held captive on Planet Paperock.  As Alex, players race to his rescue through 11 levels, battling enemies and avoiding obstacles while winning coins that will buy special items and vehicles.  At the end of each level, players encounter a boss and enter into a match of “Rock, Paper, Scissors.”  Throwing the right symbols puts players ever closer to bringing King Thor home; throwing the wrong symbols squashes them beneath a heavy weight.