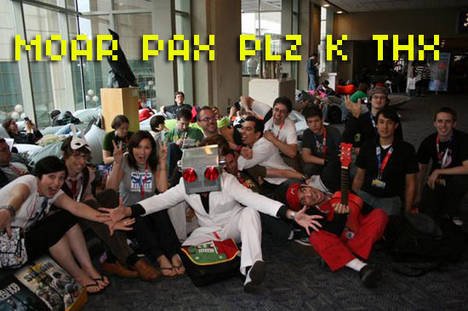 Now that E3 and Comic-Con are behind us, it’s time to focus on PAX 2008. The fine folks from Penny Arcade have sent us a little reminder that this Thursday will be the last day to pre-register for this year’s PAX. Right now, the three-day pass is only $45 and one-day passes are $25. After Thursday, at the door prices will go up by $5 with the three-day pass going for $50 and the daily passes going for $30.

Sure, $5 doesn’t sound like that much of a price increase, but don’t forget that there will be plenty of goodies on sale. I’m still kicking myself for not purchasing the awesome Castle Crashers figures from last year.

A full schedule of the panels hasn’t been released yet, but Penny Arcade did drop a few expected panels that you can check out after the jump. The History of Harmonix panel sounds interesting and of course, there is no way I’m missing a Mega64 panel.

Stay tuned to Destructoid, as we’ll be slowly revealing our plans including more information on the Destructoid panel. Also, hit the gallery to check out the show floor layout for all of the exhibitors that will be at PAX 2008.

SEATTLE – July 28, 2008 – The organizers of the fifth annual Penny Arcade Expo (PAX) today issued a reminder that July 31 is the last chance to pre-register for the gaming festival at the Washington State Trade and Convention Center in Seattle Aug. 29-31. Based on current pre-registration numbers, attendance is expected to break 45,000, guaranteeing a packed house for this year’s PAX.

The keynote speaker for 2008, respected screenwriter and developer Ken Levine, will kick off the festivities, including gamer-themed music concerts, an Exhibition Hall crammed full with over 70 companies, console and PC tournaments, the Omegathon competition and a wide variety of industry panels. Significant panels and presentations will include:

–  History of Harmonix: THE ROCKENING

–  How to Make the World Notice Your Video Game Blog

–  The Power of Gaming Communities