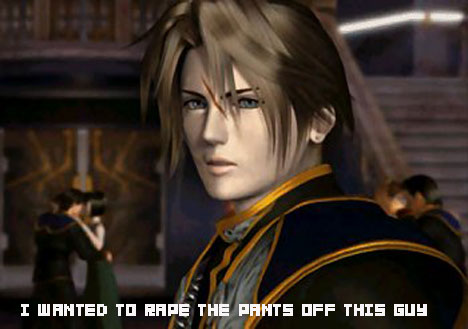 I joke about it sometimes, but the truth of the matter is I like playing RPGs with pretty boys as lead characters. I’d rather stare at a hot guy for 80 hours than a dude who looks like Rodney Dangerfield. Apparently Square-Enix sees the magic of the formula as well, if recent comments from The Last Remnant developer Yusuke Naora are to be believed:

“The format of the RPG lends itself well to having a teenage protagonist. Usually you’re playing for many hours, taking a character on a journey from a relatively weak state to one of power and maturity, a gameplay journey that mirrors that of a teenager moving into adulthood. That’s certainly one of the reasons it works well having young protagonists. We sometimes wonder what we’re doing dealing with such young protagonists in our games, characters who don’t necessarily speak to us as adults. There’s no pressure internally on how you have to make a character. But you do find that there’s an expectation of how a protagonist must look for Japanese gamers.”

Interesting, indeed. Obviously American RPG fans don’t require a teenage protagonist in order to relate, but consider that Cloud Strife is one of the most beloved young male characters from any RPG, and it gets you thinking. Personally, I would love to see some other types of characters go through their own journeys — I would have love a solo game where I played as Auron from Final Fantasy X, for instance. What say you?