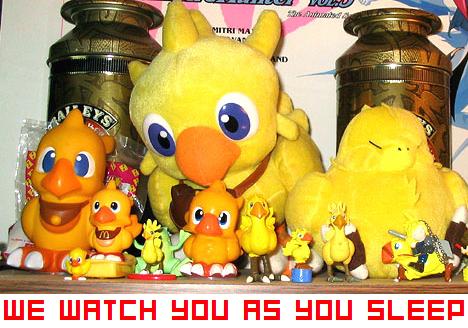 While we’ve already reported on a couple of Square Enix’s latest plans for parting you from your cash, a report at Japanator on the Square Enix Party ’07 reveals a nefarious multi-format campaign of terror, intended to put them in your home or pocket soon, regardless of which systems you own.

It seems Squenix are treating 2007 as the year to really embrace the international industry as a whole. With high profile releases comprising of established franchises and new IPs, with all kinds of things in between, excitedly bursting out all over the place for every major format on the market.

In addition to the previously known Final Fantasy XI expansion, the new internationally-focused IP The Last Remnant on the Xbox 360 and PS3, and the who-knows-what-the-hell-it-is PSP game Final Fantasy: Dissidia, the company are now touting Star Ocean 1 & 2 for the PSP and a brand new Chocobo Dungeon for the Wii.

Add all of this to the existing roster of FFVII: Crisis Core (PSP), Dragon Quest IX (DS), FFXII: Revenant Wings, (DS), and the fact that there’s probably going to be a Final Fantasy XIII game for every format between governmental super computer and pocket calculator, then there really is going to be no escape from the House Of Moogle over the next couple of years.

Head to Japanator for the rest of the details.